(A) Face showing buccal lesions, (B) hands of case #3. Photos were taken 14 days after illness onset.

Maximum clade credibility tree. Whole genomes available at the Poxvirus Bioinformatics Resource Center website (www.poxvirus.org) were aligned using the MAFFT plugin for Geneious Pro 5.6.410 (Available from http://www.geneious.com; Geneious v5.6). A central region of the genome stretching from E9L to A24R (VACV Cop) was extracted from the alignment for phylogenetic analysis. The tree search was carried out in Geneious Pro 5.6.4 using the MrBayes plugin (settings included a GTR model with a proportion of invariable sites and a gamma-shaped distribution of rates across sites, 5M generations, and a 20% burn-in). The final average standard deviation of split frequencies was 0.000306, showing sufficient convergence of the two runs. Posterior probabilities are labeled at each node. Branch lengths are drawn to scale. (GenBank accession nos.: SUD2005_01 KC257459; DRC_Yandongi KC257460; ROC_2010 KC257461.) 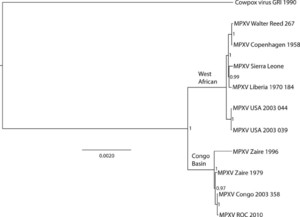 Monkeypox is an acute viral infection with a clinical course resembling smallpox. It is endemic in northern and central Democratic Republic of the Congo (DRC), but it is reported only sporadically in neighboring Republic of the Congo (ROC). In October 2009, interethnic violence in northwestern DRC precipitated the movement of refugees across the Ubangi River into ROC. The influx of refugees into ROC heightened concerns about monkeypox in the area, because of the possibility that the virus could be imported, or that incidence could increase caused by food insecurity and over reliance on bush meat. As part of a broad-based campaign to improve health standards in refugee settlement areas, the United Nations International Children's Emergency Fund (UNICEF) sponsored a program of intensive community education that included modules on monkeypox recognition and prevention. In the 6 months immediately following the outreach, 10 suspected cases of monkeypox were reported to health authorities. Laboratory testing confirmed monkeypox virus infection in two individuals, one of whom was part of a cluster of four suspected cases identified retrospectively. Anecdotes collected at the time of case reporting suggest that the outreach campaign contributed to detection of suspected cases of monkeypox.

Monkeypox is an acute viral infection with a clinical course resembling smallpox. However, unlike smallpox (now eradicated), which only affected humans, monkeypox is a zoonosis endemic in parts of sub-Saharan Africa. The initial symptoms of monkeypox in humans involve a brief (2–3 days) febrile prodrome, which is followed by the development of a disseminated rash that consists of monomorphic, well circumscribed, deep-seated, and frequently umbilicated, pustular lesions. The density of lesions is generally highest on the face and extremities. Lesions can also occur on the palms of the hands and soles of the feet. During the pustular phase, the visual features of monkeypox rash lesions are highly characteristic of an Orthopoxvirus-associated infection. However, during the early stages of rash evolution (i.e., papular, vesicular stages) and after the characteristic peak, when primary lesions have begun to heal and regress (i.e., crusting, desquamation), it can be difficult to discriminate between monkeypox and other rash illnesses based on physical characteristics alone. Laboratory testing is thus pivotal to establishing a definitive diagnosis of monkeypox.

Though the primary sylvatic reservoir of monkeypox remains unknown, monkeypox is enzootic in northern and central Democratic Republic of the Congo (DRC).1–3 Monkeypox also occurs sporadically in neighboring Republic of the Congo (ROC), where despite the occurrence of an outbreak of monkeypox in northern ROC in 2003,4 residents retained little appreciation of monkeypox and the risks associated with illness, even in those areas that had been affected by the disease. This prompted a large-scale community education campaign in May–October 2009 in the affected area of northern ROC. The outreach was performed by Congolese education and health specialists, using locally produced, local language materials that feature commentary from prominent community members. The intent of the outreach was to establish the foundations for community-based surveillance for monkeypox (and other rash illnesses) and to promote health are seeking behaviors. Outreach activities were performed in 16 communities stretched out along the Ubangui River bordering DRC; the content of the training modules has been described elsewhere5; among those who attended the film-based outreach sessions, there was a demonstrated improvement in individuals' knowledge of the features of monkeypox illness and transmission. And when asked after seeing the films, attendees expressed a heightened likelihood to notify local officials and seek health care in the event that monkeypox is suspected in a family member.5

As the outreach program was drawing to a close in October 2009, an eruption of interethnic violence in northwestern DRC precipitated the movement of thousands of refugees across the Ubangi River into the areas of ROC where the outreach had just been performed. By the end of January 2010, ∼114,000 refugees had relocated to cities and villages along the river in ROC, concentrating mainly in areas north of the city of Impfondo (the location of the 2003 outbreak of monkeypox). The influx of refugees to ROC heightened concerns about monkeypox in the area, because of the possibility that the virus could be imported, or that food insecurity and over-reliance on bush meat could lead to increased disease incidence. In response to this crisis, in April and May, 2010, as part of a broad-based campaign to improve health standards in refugee settlement areas, the United Nations International Children's Emergency Fund (UNICEF) sponsored a program of intensive community education that included modules on monkeypox recognition and prevention. The International Conservation and Education Fund (INCEF), the implementation partner for the program, performed an outreach in 25 cities and villages where the refugees had congregated. Approximately 65,000 people attended the outreach sessions.

In the 9 months including and immediately following the outreach, 10 suspected cases of monkeypox were reported to health authorities (Table 1). (None had been reported during the prior 12 months.) Skin lesion specimens were collected from seven of the suspected cases; laboratory testing by quantitative polymerase chain reaction assays (described elsewhere7–9) was completed for four cases. (Specimens from the remaining cases were not analyzed because of the difficulty in obtaining timely transportation to a reference laboratory.) Laboratory testing performed at the Institut National de Recherche Biomédicale (INRB) in Kinshasa and the U.S. Centers for Disease Control and Prevention (CDC) in Atlanta confirmed monkeypox virus infection in two individuals (cases #2, #3)—one of whom (case #3) was the index case in a cluster of four related suspect monkeypox cases. Two individuals (cases #1, #5) were ruled out for monkeypox. Further laboratory testing resulted in a diagnosis of yaws for one of these individuals, as described in a previous publication.6

Characteristics of suspected cases of monkeypox reported to health authorities in Likouala region, 2010

Clinical criteria consistent with surveillance case definition for suspected monkeypox: vesicular pustular eruption characterized by hard and deep pustules not explained by any other disease, and a febrile prodrome, or lymphadenopathy (auxillary, auricular, cervical), or lesions on the palms of the hands and soles of the feet.

Laboratory testing not performed because of lack of availability of specimen transport.

The first of the confirmed cases (case #2) was 7 years old at the time of her illness, and may have been displaced by the conflict, as her home of origin was noted to be in DRC. The probable source of infection for this patient was not identified. The second confirmed case (case #3) was a 16- year-old female of pygmy ethnicity who was a resident of ROC. She noted the beginnings of a rash on September 1, 2010, after a short period of fever and dyspnea. By September 14th she had a disseminated pustular rash, cough, adenopathy, chills, headache, and fatigue. Upon receiving advice from a neighbor who had attended a monkeypox education session, the family of case #3 brought her to a clinic run by Medecins d'Afrique, where she was placed in isolation and lesion specimens and photos were collected (Figure 1). The uncle of the 16-year-old girl and his two sons were reported to have had similar illnesses during the previous month; the uncle died and the two boys had recovered by the time the girl fell ill.

A virus isolate recovered from case #3 was sequenced using Illumina sequencing technology (Illumina Inc., CA). Genetic analysis encompassing a 81,137 nucleotide section of the genome, which spans the region between the E9L and A24R loci (and includes both; reference strain VACV_Copenhagen), indicates that the 2010 isolate is highly similar (∼99.5%) to the virus implicated in a hospital-associated outbreak of monkeypox that occurred in Impfondo, ROC in 2003.4 It is less similar to strains isolated in the DRC in 1979 and 1996.1,11 Phylogenetic analysis of this portion of the genome supports a close relationship between the two isolates collected in ROC in 2003 and 201011 (Figure 2). Within the coding region examined (E9L-A24R), there is only one nucleotide difference between the two isolates that is predicted to result in an amino acid change. (A single nucleotide transversion resulted in the alteration of a methionine to an isoleucine at amino acid position 56 in the small capping enzyme [VACV_Copenhagen D12L]). This region includes the central area of the genome where many of the genes are conserved in all poxviruses.

The genetic characteristics of a virus isolate can provide insights into its geographic origins.12 Any occurrence of human monkeypox in ROC prompts consideration of whether the infection was acquired from an indigenous sylvatic source (i.e., resident virus with local circulation), or whether the virus could have been imported from DRC by people, animals, or animal products. The evidence associated with the two confirmed cases of monkeypox in ROC from 2010 (cases #2, #3) is for the most part insufficient to suggest one possibility versus the other. Detailed exposure histories were unavailable for either case, and though the high degree of genetic identity observed between the virus isolated from case #3 and that responsible for the outbreak in ROC in 2003 could be interpreted as evidence of an ROC-associated genotype, the paucity of strains available for comparison from nearby areas in DRC renders it impossible to determine whether the ROC strains in fact comprise a unique lineage. Collection of additional isolates on both sides of the river will be needed to determine the probability that the ROC strains are sufficiently divergent from those observed across to Ubangui River to suggest independence.

Anecdotal information collected at the time of case reporting indicates that the outreach campaign stimulated community-based surveillance thus contributing to the detection of suspected cases in refugee settlement areas. Monkeypox can spread from person to person and sizable outbreaks have been documented1; the ability to rapidly detect cases and implement appropriate interventions to prevent transmission is particularly important when dealing with densely aggregated populations that have inadequate health care resources, such as refugees and internally displaced peoples. During the 2010 refugee crisis in ROC, seven suspected cases of monkeypox were identified and reported by health authorities. Logistical impediments prevented timely laboratory analysis of clinical specimens (for two patients specimens were never tested), but even with this constraint, steps were taken to limit adverse public health consequences of the suspected monkeypox virus infections. Patients who are rapidly placed in isolation and provided with supportive care (including treatment for other etiologies on the differential such as yaws) are more likely to have positive outcomes and less likely to generate additional cases, regardless of the ultimate laboratory diagnosis rendered. Intensive community education can lead to increased capacity for detection of rare but impactful diseases such as monkeypox in high transmission risk settings. Education of physicians in the recognition and treatment of monkeypox is a critically important adjunct to this activity.