Distribution of cases with brucellosis in police station officers from December 2007 to April 2008.

Incidence of brucellosis in 60 police station officers in Lima, Peru, December 2007 to April 2008. 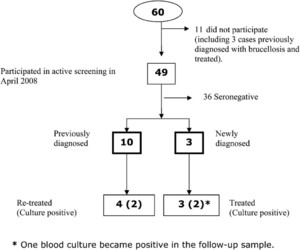 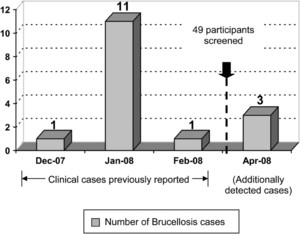 A Foodborne Outbreak of Brucellosis at a Police Station Cafeteria, Lima, Peru

Brucella melitensis is highly infectious for humans and can be transmitted to humans in a number of epidemiological contexts. Within the context of an ongoing brucellosis surveillance project, an outbreak at a Peruvian police officer cafeteria was discovered, which led to active surveillance (serology, blood culture) for additional cases among 49 police officers who had also eaten there. The cohort was followed up to 18 months regardless of treatment or symptoms. Active surveillance estimated the attack rate at 26.5% (13 of 49). Blood cultures from four cases were positive; these isolates were indistinguishable using multiple locus variable number tandem repeat analysis. This investigation indicates the importance of case tracking and active surveillance for brucellosis in the context of potential common source exposure. These results provide rationale for public health investigations of brucellosis index cases including the bioterrorism-related dissemination of Brucella.