Location of Yunnan Province in China.

The epidemic patterns of annual malaria mortality and incidences in Yunnan, 1991–2010.

Boxplots of the seasonal distribution of malaria deaths during 2001–2010, Yunnan, China The boxplot displays the values of the 25th, 50th, and 75th percentiles.

Mortality of Yunnan province and 11 cluster counties of western Yunnan. 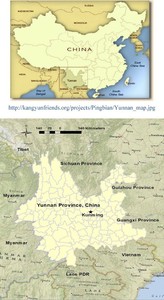 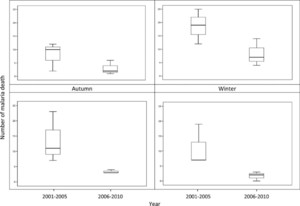 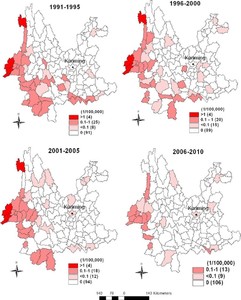 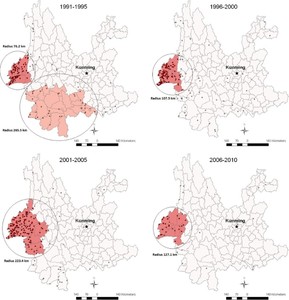 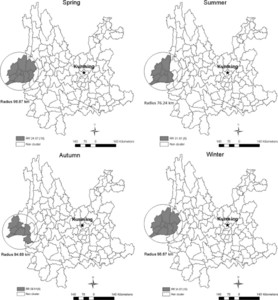 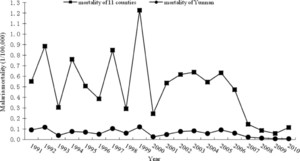 Malaria has been a heavy social and health burden in the remote and poor areas in southern China. Analyses of malaria epidemic patterns can uncover important features of malaria transmission. This study identified spatial clusters, seasonal patterns, and geographic variations of malaria deaths at a county level in Yunnan, China, during 1991–2010. A discrete Poisson model was used to identify purely spatial clusters of malaria deaths. Logistic regression analysis was performed to detect changes in geographic patterns. The results show that malaria mortality had declined in Yunnan over the study period and the most likely spatial clusters (relative risk [RR] = 23.03–32.06, P < 0.001) of malaria deaths were identified in western Yunnan along the China–Myanmar border. The highest risk of malaria deaths occurred in autumn (RR = 58.91, P < 0.001) and summer (RR = 31.91, P < 0.001). The results suggested that the geographic distribution of malaria deaths was significantly changed with longitude, which indicated there was decreased mortality of malaria in eastern areas over the last two decades, although there was no significant change in latitude during the same period. Public health interventions should target populations in western Yunnan along border areas, especially focusing on floating populations crossing international borders.