Geographic distribution of Escherichia coli pathotypes in various districts of Punjab, Khyber Pakhtunkhawa, and Sindh during the floods in 2010 and 2011. 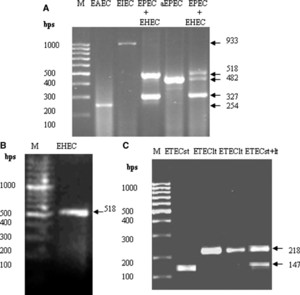 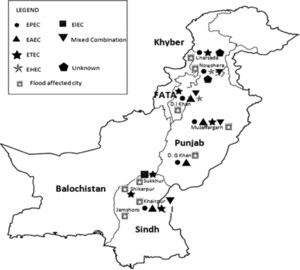 This study compares Escherichia coli pathotypes circulating among children in Pakistan during the floods of 2010 and 2011 and from sporadic cases outside flood affected areas. Using multiplex polymerase chain reaction 115 of 205 stool samples (56.29%) were positive for diarrheagenic E. coli from specimens taken during the floods compared with 50 of 400 (12.5%) stool samples being positive for sporadic cases. The E. coli pathotypes were categorized as Enteropathogenic E. coli 33 (28.69%) and 13 (26%), Enterotoxigenic E. coli 29 (25.21%) and 15 (30%), Enteroaggregative E. coli 21 (18.2%) and 18 (36%), Enterohemorrhagic E. coli 5 (4.34%) and 1 (2%) from flood and sporadic cases, respectively. Furthermore, patients co-infected with more than one pathotype were 26 (22.60%) and 3 (6%) from flood and sporadic cases, respectively. The study shows an unexpectedly high rate of isolation of E. coli pathotypes suggesting Pakistan as an endemic region that requires active surveillance particularly during flood periods.