Adult lifespan and life history traits (experiment 1). Mean (± standard error) of (A) survivorship, (B) dry weight, (C) development (females and males shown by grey and white bars, respectively), and (D) lifespan of Ae. albopictus from temperature treatments. Means followed by different letters are significantly different from one another.

Adult life history traits for mosquitoes exposed to dengue-1 virus (experiment 2). Mean (± standard error) of (A) survivorship, (B) development (females and males shown by grey and white bars, respectively), and (C) wing length of Ae. albopictus from temperature treatments. Means followed by different letters are significantly different from one another.

Vector competence for mosquitoes exposed to dengue-1 virus-infected blood (experiment 2). Mean (± standard error) susceptibility to dengue virus infection and dissemination of Ae. albopictus from temperature treatments. The numbers of mosquitoes assayed to determine infection and dissemination rates were 141 (20–20°C), 144 (30–20°C), 85 (20–30°C), 125 (30–30°C), and 138 (25–25°C). Means followed by different letters are significantly different from one another. 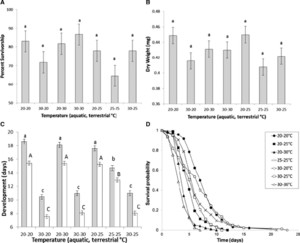 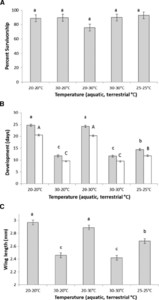 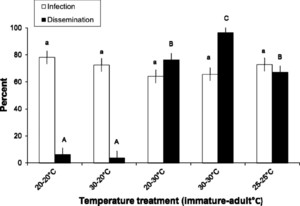 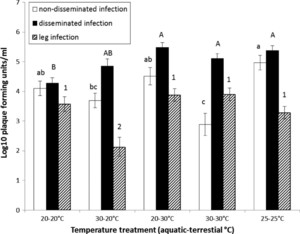 Temperature and Dengue Virus Infection in Mosquitoes: Independent Effects on the Immature and Adult Stages

Temperature is one of the most important environmental factors affecting biological processes of mosquitoes, including their interactions with viruses. In these studies, we show independent effects of rearing temperature on the immature aquatic stages and holding temperature on the adult terrestrial stage in terms of alterations in adult survival and progression of dengue-1 virus infection in the Asian tiger mosquito Aedes (Stegomyia) albopictus. Our studies show that adult survival was determined by adult-holding temperature, regardless of rearing conditions of the immature stages. In contrast, spread of virus throughout the body of the mosquito, a pre-requisite for transmission, was reduced when the immature stages were reared in cool conditions. These results show that immature-rearing temperature selectively modified mosquito traits that influence competency for viruses, and they further our understanding of the nature of temperature effects on interactions between mosquitoes and virus pathogens and risk of disease transmission.