Percentage of children per village coinfected with different parasites.

Malnutrition distribution by age and sex. 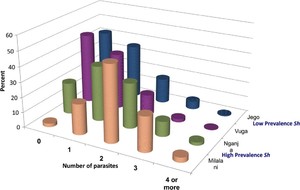 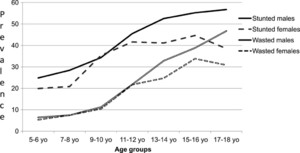 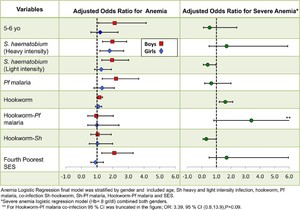 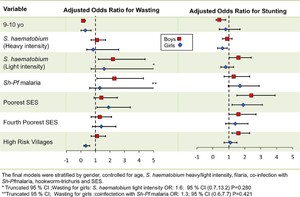 We measured prevalence of Schistosoma haematobium, Wuchereria bancrofti, Plasmodium falciparum, hookworm, and other geohelminths among school-aged children in four endemic villages in Kwale County, Kenya and explored the relationship between multiparasite burden, undernutrition, and anemia. In 2009–2010 surveys, cross-sectional data were obtained for 2,030 children 5–18 years old. Infections were most prevalent for S. haematobium (25–62%), hookworm (11–28%), and falciparum malaria (8–24%). Over one-half of children were anemic, with high rates of acute and chronic malnutrition. Associations with infection status showed significant age and sex differences. For boys, young age, low socioeconomic standing (SES), S. haematobium, and/or malaria infections were associated with greater odds of anemia, wasting, and/or stunting; for girls, heavy S. haematobium infection and age were the significant cofactors for anemia, whereas low SES and older age were linked to stunting. The broad overlap of infection-related causes for anemia and malnutrition and the high frequency of polyparasitic infections suggest that there will be significant advantages to integrated parasite control in this area.