Occupation distribution of patients with strongyloidiasis in China, 1973–2011.

Age distribution of patients with strongyloidiasis in China, 1973–2011.

Symptoms and other diseases among patients with strongyloidiasis in China, 1972–2011. EOS = eosinophils. 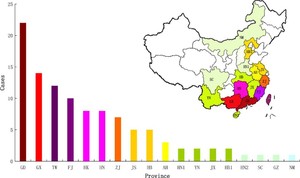 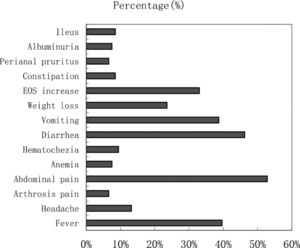 Since the first case of strongyloidiasis reported in China in 1973, there have been 330 confirmed cases as of 2011. The present study conducted a meta-analysis on 106 cases for which detailed information on clinical symptoms, diagnosis, and outcome was available. Most (63%) cases were from the past decade. Immunocompromised patients and those given cortical hormones accounted for 68% of the cases, and case-fatality rate was 38%. General clinical symptoms included abdominal pain (53%), diarrhea (46%), fever (40%), and vomiting (39%). The parasite positivity rate in feces, sputum, and urine by microscopic diagnosis was 75%, 24%, and 8%, respectively, and gastrointestinal endoscopy or other biopsy detection rates were 17%. A lack of specific clinical manifestations makes early diagnosis and correct treatment difficult. Strongyloidiasis is an emerging disease in China, and public and clinical awareness needs to be raised to improve prevention and control.