Photograph showing the serpentine Onchocerca worm (arrow) in the anterior chamber of the left eye of patient.

Photograph of the longitudinal section through the anterior end of Onchocerca larva removed from the anterior chamber. The arrow points to the esophagus. H&E staining (Scale bar = 50 μm).

Photograph of the cross-section at the midbody of Onchocerca larva removed from the anterior chamber. H&E staining (Scale bar = 25 μm). 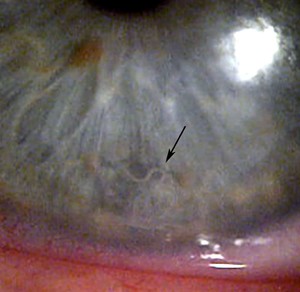 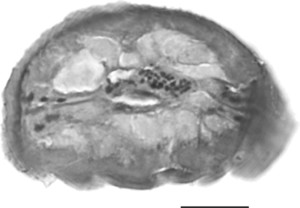 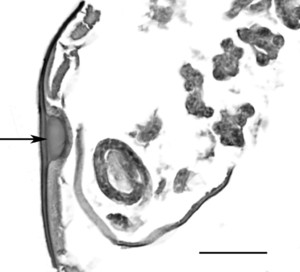 Ocular Zoonotic Onchocerca Infection in a Resident of Oregon

A long, slender filarial nematode was removed from the left anterior chamber of a resident of Oregon after several days of pain and blurred vision. The worm was identified as an Onchocerca, but it could not be further identified. This worm is the third zoonotic Onchocerca removed from the anterior chamber and the second case reported from the United States. Cases of zoonotic onchocerciasis continue to garner attention, and those cases affecting the eye are of particular interest.

Zoonotic infections of the eye continue to be of great interest, and those infections caused by filarial worms are especially unusual.1 Zoonotic Onchocerca infections are uncommon, but 16 cases have been reported from the United States, Canada, Japan, Albania, Hungary, Austria, Turkey, and Tunisia.2,3 Of these cases, two cases were infections of the anterior chamber of the eye (one case in the United States and one case in Hungary).4,5 The exact species identification has been difficult in some of the cases, and a number of Onchocerca species that infect animals have been identified or speculated to be the cause. The worms recovered from the eye have been especially difficult to identify accurately, because they have been young immature forms that do not have fully developed morphologic features. Also, some of the worms have been fixed in formalin, which precludes molecular typing.

The present report describes the 17th case of zoonotic Onchocerca, which occurred in a resident of Oregon in the United States; this case is the third occurring in the anterior chamber of the eye.

The patient is a 56-year-old white male who presented with a 10-day history of moderate discomfort behind his left eye; 2 days before his evaluation, he noted blurred vision in the left eye. His past medical history was unremarkable, and he denied any travel outside of the United States. His place of residence was a small rural community at the southern end of the Willamette Valley in western Oregon. His visual acuity could be corrected to 20/20 in the right eye and 20/30-2 in the left eye with a myopic correction. Slit lamp examination showed 1+ injection of the bulbar conjunctiva in the left eye. The inferior anterior chamber on the left revealed a 1.5-cm-long thin white nematode that was curled around itself and reacting spasmodically to the light of the slit lamp (Figure 1). The anterior chamber was relatively quiet, and the remainder of his anterior segment examination was unremarkable. His intraocular pressures were measured at 14 mmHg in the right eye and 49 mmHg in the left eye. Gonioscopy revealed open angles in both eyes. An undilated examination of the posterior segments in both eyes revealed a cup/disc ratio of 0.1 and normal maculas and vessels.

The patient was treated with oral acetazolamide (500 mg) to help lower his intraocular pressure and pilocarpine (4%) one-drop in the left eye to constrict the pupil and prevent posterior migration of the nematode. Several hours later, he was brought to the operating room, and the nematode was aspirated out of the anterior chamber using a 20-gauge bimanual microincision aspirating cannula combined with a 20-gauge microincision irrigation cannula using topical anesthesia. The aspirating cannula was attached to a 15-mL Vacutainer vial to isolate the nematode for identification. After surgery, the patient was treated with a combination topical β-blocker and α-agonist for pressure control in addition to a topical steroid and topical fourth-generation fluoroquinolone. His pressure was normal the next day, and he was tapered off of the topical glaucoma medications and topical steroids over several weeks without incident. The patient's recovery was unremarkable, and he has no residual damage.

The worm was fixed in formalin and submitted to a reference pathology laboratory, where it was sectioned and stained with hematoxylin and eosin (H&E). One slide with multiple sections of the worm was available for study. Although the specimen is obviously an immature filarial worm, several morphologic features were evident that allowed a great deal to be said about the identification of the worm. A longitudinal section through the anterior end was present (Figure 2), which illustrated a blunt, sharply tapered end, presence of a thin muscular esophagus, and absence of a head bulb or other remarkable ornamentation. The overall shape of the anterior end is very much like the shape seen in young Onchocerca larvae (shown in figure 2a in the work by Sallo and others5 and figure 4e in the work by Abraham and others6). It differs from the more rounded anterior end of Dirofilaria, and the absence of a head bulb rules out Brugia (the other two likely causes of zoonotic filaria infection in the eye). In addition, the muscle cells were few per quadrant, and the contractile portion was low (Figure 3). Dirofilaria have many muscle cells per quadrant, and the contractile portion is tall; again, this feature helped to exclude Dirofilaria from the differential diagnosis. Brugia, however, has few muscle cells per quadrant, and the contractile portion tends to be low; however, because of the shape of the anterior end noted above, it was also excluded from the differential.

Parasites in the eye, especially large mobile ones such as in the present case, draw the attention of both the patient and healthcare provider.1 This case presents yet another striking example of such an infection. Interestingly, this case is the fourth reported case of a small filarial worm recovered from the eye of a resident in Oregon. The work by Beaver and others7 described the third case and reviewed the previous two cases; it speculated that Molinema (Dipetalonema) arbuta of the porcupine or M. (Dipetalonema) sprenti, a related parasite from the beaver, may have been the causative agent.7 The present case, although similar in both clinical presentation and geographic origin, differs in that intact worms were recovered and studied. In the previous cases, the material available for study was histologic sections, and hence, very different morphologic features were available for study between the present case and the three previous cases. Despite this difference, efforts were made to compare the present worm to M. arbuta. For comparative purposes, archived specimens of M. (Dipetalonema) arbuta, recovered from porcupines (Erethizon dorsatum), were retrieved from the Paul Beaver Collection maintained in the Division of Parasitic Diseases & Malaria, Centers for Disease Control and Prevention, and a small piece of broken adult female worm was sent for sectioning and staining with H&E. Several cross-sections suitable for study were obtained (Figure 4), and the most striking histologic feature was a prominent internal lateral cuticular ridge that was broad and rounded. No such internal lateral cuticular ridge was evident in the worm removed from the eye in the present case, and for this reason, we can exclude M. arbuta from consideration as the causative species. Because of the very striking lateral internal cuticular ridge seen in M. arbuta, which is also likely present in all members of the genus Molinema, this particular species and probably all members of the genus Molinema can be excluded as a cause of the present case. Whether any of the previous three cases might represent the same species of worm as recovered in the present case cannot be stated.

Onchocerca spp. are very common filarial parasites of numerous domestic and wild animals, especially ungulates, such as horses, cattle, and antelope. Infrequently, one or more of these species causes zoonotic infection in people, which most often involves association with dense connective tissue.2 At present, there are 16 such cases described in detail. Of these cases, a subset of eight cases, including the present case, has involved the eye: four cases are associated with the subconjunctiva, one case is associated with a tendon of the eye, and three cases, including the present case, involved removal from the anterior chamber of the eye.4,5 At least five different species of Onchocerca have tentatively been ascribed to these cases, and for the three most recent cases involving the subconjunctiva, the species has been identified microscopically and molecularly as O. lupi.3,8 Not a great deal is known about this species, including its natural definitive host, host range, preferred location in the host, or geographic distribution. Originally described from a wolf in the Caucasus region of Georgia, it seems to be common in dogs in Europe,9,10 and it was recently reported in the United States,11 suggesting that it is a natural parasite of canids, although it is not clear whether dogs or wild canids are the natural host. There is also a report of the infection in cats in the United States, further confusing the question of the natural host.12 Interestingly, other than the one original description of the parasite from wolves, there are no additional reports in wild canids. In dogs in Europe and the United States, the worm has always been associated with nodules in the connective tissue of the subconjunctiva, which was the case in the three human cases recently described. However, two of three cases of worms extracted from the anterior chamber have represented young, immature worms, in which the cuticular morphology used as an aid to distinguish the species was not fully developed. It is not clear if the worms in the anterior chamber would necessarily be the same species as the worms causing nodule formations in the subconjunctiva. In fact, the worm recovered from the patient in Colorado was sufficiently developed to see multiple striae between ridges, very distinct from the striae of O. lupi, where there is one stria between each ridge.4 At this time, it seems reasonable that those worms removed from the anterior chamber not be ascribed to O. lupi.

Although our understanding of zoonotic filarial infections continues to grow, in the vast majority of cases, there are no apparent underlying factors or conditions that contribute to or dictate why some individuals permit development of the infection over several to many months and in some cases, to parasite maturity.

As sequence data for more and more species of parasites become available, including for the filaria, efforts should be made to preserve specimens in non-formalin fixatives to more readily facilitate molecular typing. In this way, a more accurate and informative diagnosis can be made. For the present case, making a diagnosis to the genus level was as far as was realistically possible, but given the recent interest in O. lupi and recognized eye disease on both canid and human hosts, it would have been advantageous to be able to do molecular typing. The need for this information will likely continue in the future. Regardless, unusual cases of zoonotic Onchocerca are likely to continue to occur, and these cases will be of interest to describe and document.