(A and B) Patient presented clinical findings of Romaña's sign. (C) Patient's initial smear contained trypanosomes (Diff Quick; 1,000× magnification). (D) Hut that the patient was residing in at the time of exposure. (E) Location of Puerto Viejo within Limon Province (highlighted in red).13 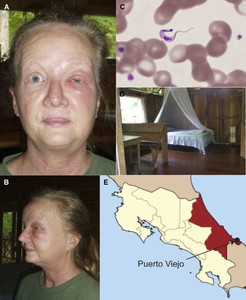 A 53-year-old Caucasian female with no significant past medical history presented to the local emergency department in May of 2008 with complaints of fever, headaches, and left eye swelling 2 weeks after returning from a 3-week trip to Puerto Viejo, Costa Rica (Limon province). The patient and her husband visited a small village, where they slept on a bed net-covered wooden platform bed in a one-room cottage that lacked netted windows and doors.

The patient had an uneventful stay in Costa Rica, and her symptoms developed 2 days after her return. Her initial symptoms included left eye swelling, pruritis, and pain. These symptoms progressed rapidly over the next few days until the patient's left eye was swollen shut, prompting a referral to an ophthalmologist. The patient was subsequently treated for allergic reaction and blepharoconjunctivitis. After no initial response to antimicrobials (levofloxacin, doxycycline, and tobramycin eye drops) and the development of fevers as high as 102.9°C, the patient was sent to the emergency department to be evaluated for periorbital cellulitis. She complained of left eye pain, headaches, daily fevers to 102°C, dyspnea on exertion, decreased energy, decreased appetite, and a blotchy rash most noticeable after a shower. She denied chest pain, palpitations, lower extremity edema, emesis, diarrhea, dysphagia, or odynophagia.

On physical examination, temperature was normal at 37.1°C, heart rate was 91 beats/min, blood pressure was 98/62 mmHg, respiratory rate was 18 breaths/min, and oxygen saturation was 98% on room air. She did not appear to be in any distress. There was periorbital edema and mild erythema of the left eye, with pronounced orbital rim edema (Figure 1). There was no visible discharge from the left eye. The right eye was normal. Her pupils were equal, round, and reactive to light. Extraocular movements were intact with two beats of lateral gaze nystagmus. Her sclerae were anicteric, and conjunctivae were pink without injection. Her oropharynx was clear without evidence of erythema, thrush, or exudate. She had one small non-tender, freely mobile right posterior cervical lymph node, and otherwise, she had no significant lymphadenopathy. Cardiovascular, pulmonary, and abdominal examinations were normal. The skin showed diffuse patches of macular, mildly erythematous, non-blanching lesions that were non-pruritic. Physical examination was otherwise unremarkable.

In collaboration with the CDC, the patient's blood was tested with multitarget polymerase chain reaction (PCR; positive), enzyme-linked immunosorbent assay (ELISA; positive, optical density [OD] = 2.4), and indirect fluorescent antibody (IFA) testing (positive, titer 1:64). Hemoculture was negative from initial blood samples, although this result may reflect the difficulty of culturing this parasite or samples for culture that were not in optimal condition. The patient was quickly initiated on nifurtimox therapy, which was the only treatment drug for Chagas disease available at CDC under a compassionate use protocol (8 mg/kg per day) at that time; treatment continued for 90 days. The patient's therapy was complicated by side effects, including aguesia, anorexia, decreased energy, insomnia, irritability, difficulty with memory, moderate depression and anxiety, and transient thrombocytopenia and transaminitis. Follow-up TTEs and EKGs normalized during the course of therapy. Neuropsychiatric side effects dissipated slowly after the completion of a full course of therapy. Peripheral smear was negative for the parasite at week 1 after treatment initiation. The PCR remained positive until 4 weeks of treatment were completed, and it became negative after 2 months of treatment. The IFA remained positive (1:64) at 13 months of follow-up. The patient continues follow-up with a primary care provider. The patient's husband was also tested for evidence of T. cruzi infection 22 days after returning from Costa Rica. Testing by PCR, hemoculture, and serology yielded negative results. The Costa Rican Ministry of Health was notified of the case of acute Chagas disease in this traveler.

Chagas disease predominantly affects persons indigenous to Latin America. Chagas disease is transmitted most frequently through the triatomine vector. However, congenital, blood-borne, organ-derived, and oral transmissions also occur. Chagas disease in the United States has been recently reviewed, with discussion of T. cruzi's life cycle, transmission, clinical manifestations, and diagnosis discussed in detail.9 Importantly, because of migration, Chagas disease is a problem of increasing concern in North America and Europe because of the sequelae of long-term infection in individual patients and protection of blood supplies against contamination with parasites.

Acute Chagas disease is often unreported because of the lack of readily identifiable clinical symptoms, and the occurrence of acute infection among short-term travelers is likely greater than reported occurrence. Acute disease usually occurs in children in populations where vector-borne transmission is endemic, but acute infection can occur at any age. Symptoms are generally mild or suggest a non-specific febrile illness. Initial symptoms of disease may occur between 1 and 4 weeks after infection. Severe acute disease is rare and may include acute myocarditis or meningoencephalitis. Chagomas are indurated areas of erythema and swelling at the site of parasite penetration. Romaña's sign is the classic sign of acute Chagas disease, and it is characterized by painless edema of the palpebrae and periocular tissues that appear when the conjunctiva was the parasite's route of entry; however, not all patients with acute Chagas disease present with Romaña's sign. Patients with orally transmitted acute Chagas disease have more severe symptoms of infection. A case series of 13 patients with orally acquired acute Chagas disease in Brazil showed the following clinical manifestations in greater than 30% of cases: fever, dyspnea, myalgia, periorbital edema, headache, cardiac murmur, nausea, cough, abdominal pain, hepatomegaly, thoracic pain, and emesis.10

Reported acute Chagas disease in travelers is an extremely rare occurrence. Previously, the GeoSentinel Surveillance Newsletter described a case of travel-related acute Chagas disease in a Canadian woman who had spent 5 months in rural southern Mexico in June of 2008.11 Our case is unique in that transmission occurred in a short-term traveler who would be considered at relatively low risk of disease acquisition, and it occurred in a region not typically associated with a high incidence of disease.

Chagas disease transmission has been reported in Costa Rica as early as 1941, but current information on incidence in Costa Rica is lacking. Costa Rica has emerged as a major tourist destination for ecotourism over the past several decades. Tourism numbers have increased from 329,000 arrivals in 1988 to 2,100,000 arrivals in 2010.12 Tourists from North America and European countries made up 61% of all international visitors to Costa Rica. Travelers should be educated concerning risks for vector-borne disease transmission, including Chagas disease, and preventive measures during pre-travel counseling.

This case highlights the need for heightened awareness of acute Chagas disease as a cause of acute febrile illness in short-term travelers to endemic areas, especially because the clinical syndrome may be subtle. As numbers of international tourists and tourists engaging in activities that potentially place them in contact with vectors continue to increase, there is potential for similar cases. Travelers to Chagas disease-endemic areas should be advised to avoid residence in poorly constructed dwellings, sleep under insecticide-impregnated bed nets, and tuck in the edges to provide a physical barrier to the triatomine bugs. Travelers should also be advised to take precautions while engaging in outdoor activities. Consultations about diagnosis and treatment of suspected Chagas disease can be directed to the Division of Parasitic Diseases and Malaria, CDC (phone: 404-718-4745; E-mail: parasites@cdc.gov; CDC emergency operator [after business hours and on weekends]: 770-488-7100). Infectious disease specialists, emergency room physicians, primary care physicians, and travel clinic physicians should be alert to the possibility of acute Chagas disease in travelers returning from endemic areas of Latin America.