State of Paraná, Brazil. ▲: Places of collections. ✦: Rodents with positive serology for hantavirus.

Bayesian phylogenetic analysis of partial S segment sequences from rodents captured in different Paraná localities (in boldface). For comparison, a subset of the sequences shown in Figure 2 (from Brazil, Paraná, and Paraguay) was used in the analysis. Paraná strains are 272 nt long and spanned nucleotides 978–1,250 of S segment, respect to ARAUV strain AY740633. Hantaan (HTNV) and Seoul (SEOV) sequences were used as outgroup species. Posterior probabilities (pp) are depicted above the nodes. GenBank accession nos.: 13636: JN252309. 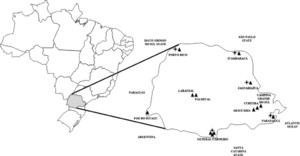 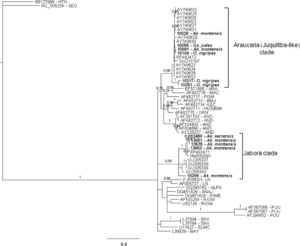 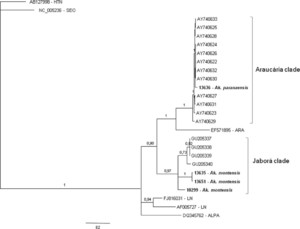 Paraná state presents the fourth highest number of accumulated cases of hantavirus pulmonary syndrome in Brazil. To map the risk areas for hantavirus transmission we carried out a study based on rodent trapping and determined the anti-hantavirus seroprevalence in these animals and in the inhabitants of these localities. Overall seroprevalence in rodents and humans were 2.5% and 2.4%, respectively. Eighty-two percent of the seropositive rodents were genetically analyzed. Phylogenetic analyses revealed that hantaviruses from rodent samples cluster with Araucária (Juquitiba-like) or Jaborá hantavirus genotypes. The Jaborá strain was identified in Akodon serrensis and Akodon montensis, whereas the Araucária strain was detected in Oligoryzomys nigripes, Oxymycterus judex, A. montensis, and Akodon paranaensis, with the latter species being identified for the first time as a natural host. These findings expose the complex relationships between virus and reservoirs in Brazil, which could have an impact on hantavirus transmission dynamics in nature and human epidemiology.