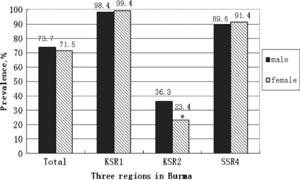 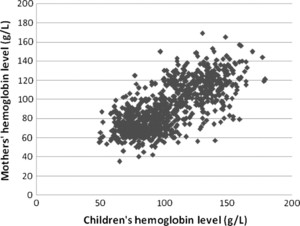 Anemia is a common nutritional problem, and it has a remarkably high prevalence rate in Southeast Asia. In this study, children from 6 to 36 months were investigated to determine (1) the prevalence of anemia and (2) risk factors associated with anemia. Convenience sampling was used to select three villages in three different regions in Burma. Hemoglobin and anthropometric indicators were measured for 872 children. Logistic regression analyses were used to determine factors associated with anemia. The overall prevalence of anemia was 72.6%, with 40.0% having severe anemia. Predictors of anemia are a young age (P < 0.001), mother with anemia (P < 0.001), height-for-age Z score < −2 (P = 0.017), low family income (P < 0.001), mothers without primary education (P = 0.007), drinking unboiled water (P = 0.029), and fever in the last 3 months (P = 0.001). There is a high prevalence of anemia in children, and their nutritional status is quite poor. To control anemia, humanitarians and governments should launch comprehensive interventions.