Percentage of women with positive results in malaria diagnostic tests for asymptomatic pregnant women in Nanoro, Burkina Faso. Left: Percentages of persons with positive results by histidine-rich protein rapid diagnostic test (HRP2 RDT), microscopy, and polymerase chain reaction (PCR) per month. Results from June are not available because women could not be included in the study during that month. Numbers of participants screened for each month is shown in parentheses. In November, for real-time–PCR (RT-PCR), n = 80 and for microscopy, n = 43. Right: Percentages of persons with positive results for all tests during the study. For HRP2 RDT, n = 418; for RT-PCR, n = 417; for microscopy, n = 380; for Plasmodium lactate dehydrogenase (pLDH) RDT, n = 412; and for enzyme-linked immunosorbent assays, n = 347. 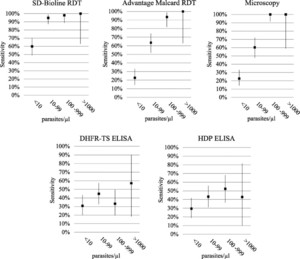 Rapid diagnostics tests (RDTs) detect malaria specific antigen(s) in the circulation, even when parasites are sequestered in the placenta and not visible by microscopy. However, research on their diagnostic accuracy during pregnancy is limited. Pregnant women (n = 418) were screened for malaria during routine antenatal care by using two RDTs that detect histidine-rich protein 2 (HRP2) or Plasmodium lactate dehydrogenase, and enzyme-linked immunosorbent assays with antibodies that detect dihydrofolate reductase–thymidylate synthase or heme-detoxification protein, and compared with real-time polymerase chain reaction (RT-PCR) and microscopy for evaluation of their diagnostic accuracy. Prevalence of malaria infection was high (53% by PCR). The RT-PCR and the HRP2 RDT detected most cases of malaria during pregnancy, whereas microscopy, the Plasmodium lactate dehydrogenase RDT, and enzyme-linked immunosorbent assays for dihydrofolate reductase–thymidylate synthase and heme-detoxification protein antibodies did not detect several low-density infections. Therefore, the HRP2 RDT could be a useful tool in high-transmission areas for diagnosis of malaria in asymptomatic pregnant women.