Percentages of patients with Plasmodium falciparum parasitemia on Day 3 after treatment with an ACT (2006–2010). 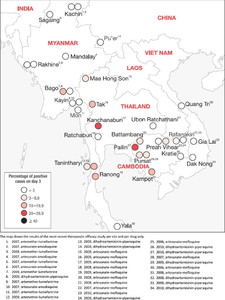 Artemisinin-based combination therapies are the most effective drugs to treat Plasmodium falciparum malaria. Reduced sensitivity to artemisinin monotherapy, coupled with the emergence of parasite resistance to all partner drugs, threaten to place millions of patients at risk of inadequate treatment of malaria. Recognizing the significance and immediacy of this possibility, the Fogarty International Center and the National Institute of Allergy and Infectious Diseases of the U.S. National Institutes of Health convened a conference in November 2010 to bring together the diverse array of stakeholders responding to the growing threat of artemisinin resistance, including scientists from malarious countries in peril. This conference encouraged and enabled experts to share their recent unpublished data from studies that may improve our understanding of artemisinin resistance. Conference sessions addressed research priorities to forestall artemisinin resistance and fostered collaborations between field- and laboratory-based researchers and international programs, with the aim of translating new scientific evidence into public health solutions. Inspired by this conference, this review summarizes novel findings and perspectives on artemisinin resistance, approaches for translating research data into relevant public health information, and opportunities for interdisciplinary collaboration to combat artemisinin resistance.