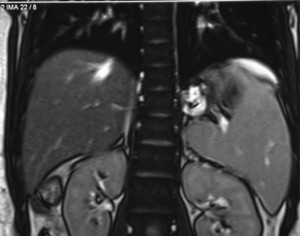 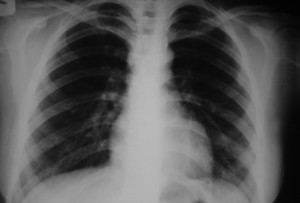 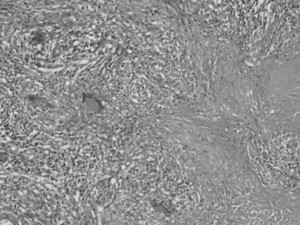 The patient was a 16-year-old Afghan refugee who had been living in Tehran (Iran) since birth. She was admitted to the hospital with complaints of nausea, vomiting, hematemesis, and melena for several days before admission. The patient had suffered from a 10 kg weight loss as well as fever and anorexia for 2 months before admission. She denied any history of TB exposure but she had an admission for intestinal obstruction at 5 years of age. At the time, she underwent abdominal surgery for the removal of an abdominal mass consisting of multiple ileocecal lymphadenopathies, which was suspicious for intestinal TB. However, a definite diagnosis was not made at that time and she did not receive any treatment for the suspected TB.

She underwent endoscopy that revealed varices at the gastroesophageal junction, which raised the suspicion for cirrhosis. Abdominal ultrasonography showed splenomegaly and nodularities in the left lobe of the liver. Abdominal and pelvic magnetic resonance imaging (MRI) showed mild splenomegaly with normal signal. Hemiazygos continuation was evident superior to the left renal vein (Figure 1) On the basis of this finding an abdominal MR venography was recommended, which showed a primary anomaly, with spleen drainage via small collateral veins. All other potential vascular findings responsible for portal hypertension such as portal or splenic vein thrombosis, splanchnic arterio-venous fistula, and Budd-Chiari syndrome were excluded.

The chest x-ray was normal (Figure 2). The Mantoux test (PPD), sputum smear, and culture for TB were negative. A computed tomography (CT)-guided biopsy of the liver was performed. Periportal inflammation along with moderate to severe lymphocytic infiltration and one giant cell aggregation, forming a granulomatous lesion was seen in the portal area (Figure 3). The hepatocytes revealed extensive hydropic change. The lobular and vascular architecture were preserved. There was no evidence of cirrhosis or malignancy. A Ziehl-Nelson staining was positive for acid-fast bacilli, and PCR testing confirmed the presence of Mycobacterium tuberculosis. The final diagnosis was chronic granulomatosis lesions consistent with isolated hepatic TB. The patient did not have any signs, symptoms, or laboratory/radiologic findings that suggested other gastrointestinal involvement.

The patient received standard treatment for TB, including isoniazid 300 mg/day, rifampicin 600 mg/day, pyrazinamide 1500 mg/day, and ethambutol 1500 mg/day for 2 months and isoniazid 300 mg/day and rifampicin 600 mg/day for 4 months. By the end of the treatment cycle, the patient was re-evaluated by checking liver function tests, undergoing endoscopic evaluation, and having a repeat abdominal MRI and liver biopsy. The endoscopy was completely normal without any existence of varices. The MRI showed slight splenomegaly, reduced in size compared with what was seen in the previous MRI, with normal parenchymal echo and localized mild dilated collateral veins and did not reveal any abnormalities in the liver. Liver biopsy revealed that some of the portal tracts have relatively preserved architecture with only mild lymphocytic portal inflammation and no significant periportal or lobular inflammation. There was no evidence of granuloma or malignancy on serial sections.

Hepatic TB is reported to occur in 50–80% of patients who are dying of pulmonary TB.2 Therefore, hepatic involvement is possibly under-diagnosed and under-reported in clinical practice. Hepatic TB can be broadly divided into two types: the more common miliary type and the less common local type, each of which can be further divided into diffuse and nodular sub-types. The miliary type characterized by a diffuse hepatic involvement, is caused by the hematogenous spread of the Mycobacterium by the hepatic arteries, which results in a granulomatous hepatitis. Such patients usually show evidence of miliary pulmonary TB as well.3

Isolated liver TB is the rarest form of local hepatic TB,4 which is reported to have an overall incidence of 0.3%.5 The local type occurs through the spread of the Mycobacterium by the portal vein from the intestine. This explains the common association of hepatic involvement in patients with bowel TB. In contrast to the miliary type, there is less evidence of pulmonary involvement. Hersch noted that, in contrast to the miliary/diffuse forms of TB that tend to be located inside the hepatic lobules, the local forms predominately occur in the portal regions.6

In this case, the only other etiology to be seriously considered was hepatic schistosomiasis because many of the clinical and pathologic features mimicked this disease. The patient in this case presented with symptoms of portal hypertension (bleeding) without having cirrhosis. Although chronic hepatic schistosomiasis is classically associated with pipe-stem fibrosis, up to 19% of patients are noted to have nodules on ultrasound.18 Ultrasonography on this patient showed splenomegaly and nodular liver (without pipe-stem fibrosis). On pathology, the patient had periportal inflammation as well as granuloma formation, which are commonly seen is schistosomiasis. However, the liver biopsy had no egg deposition in the portal tracks, which is pathognomonic for hepatic schistosomiasis. This patient was raised in Iran, an area that is free from the Schistosoma associated with hepatic disease (Schistosoma mansoni, Schistosoma mekongi, and Schistosoma japonicum).19–21 The finding of an acid-fast bacilli (AFB)-positive biopsy and the dramatic response to TB-specific treatment further confirmed that the diagnosis of isolated liver TB was the cause of this patient's portal hypertension.

In a recent review of all causes of bleeding varices at a United States teaching hospital, 3% of all such cases were caused by TB,22 a surprisingly large number. Although this was the only large study we could find describing this, it should be remembered that the incidence of TB is low in the United States and that in countries where TB is endemic these rates may be potentially higher. Some of the highest rates of TB in the world are found in these areas with overlapping hepatic schistosomiasis endemnicity.23,24 Thus, TB should also be in the differential diagnosis of non-cirrhotic portal hypertension, especially in areas where both TB and schistosomiasis are endemic.

We have reported a case in which isolated hepatic TB caused portal hypertension and gastrointestinal bleeding mimicking some of the clinical and pathologic features of hepatic schistosomiasis. In endemic areas, TB should be considered in the differential diagnosis of non-cirrhotic portal hypertension.