Map of Thailand and highlight of screening site in Bo Rai district in Trat province, Thailand, in June 21–22, 2011. 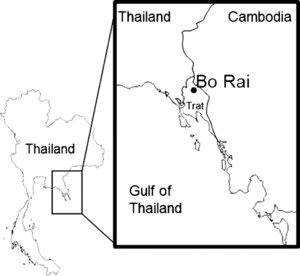 Thailand's National Malaria Control and Elimination Strategy aims to free 80% of the country from locally acquired malaria by the year 2020 (Bureau of Vector-Borne Diseases, Ministry of Public Health, Thailand, unpublished data). However, the elimination of local transmission requires rapid detection and treatment of all infections, including those infections in asymptomatic individuals who may serve as important reservoirs.1–3 Currently, malaria case detection for surveillance depends on microscopy or rapid diagnostic tests, but both methods miss low parasite densities on the order of 10 parasites/μL. Such submicroscopic infections are detectable by polymerase chain reaction (PCR) and are common in areas with low and unstable malaria.4–7 Efforts to control and eliminate malaria from Trat province on the border with Cambodia are intensifying because of the potential spread of artemisinin resistance. The detection of submicroscopic cases may facilitate containment efforts and help preserve artemisinin-based combination therapies for effective malaria treatment (Bureau of Vector-Borne Diseases, Ministry of Public Health, Thailand, unpublished data).

Real-time PCR is a highly sensitive tool for detecting and speciating Plasmodia. Pooling samples before analysis facilitates the large-scale application of this technique for surveillance by reducing cost and analysis time.7,8 As Thailand aims for malaria elimination, including elimination of artemisinin-resistant parasites, improvements in case detection are necessary. We aimed to determine if pooled real-time PCR could be integrated with the existing active case detection systems in Thailand and if so, if it would be more effective than microscopy for identifying low-density parasitemias.

A single index case, with mixed P. falciparum–P. vivax infection, was identified during hospitalization for severe malaria in July of 2011 through passive case detection. This infection was likely acquired during frequent forest exposure. Two weeks after this identification, 187 residents in Bo Rai district, Trat province, Thailand (Figure 1) were contacted over 3 days according to the policies of the National Malaria Control Program of Thailand, which includes contact tracing (Case Investigation Survey) and high-risk group screening (Special Case Detection). For contact tracing, we screened neighbors within 1 km of the index case. For high-risk group screening, we screened soldiers from Khao Lan and Ban Sapanhin army camps and residents of Takang and Ban Samoh villages, which have a high proportion of Burmese Mon migrants.

We administered a questionnaire to collect demographic information and risk factors for malaria, such as history of fever and malaria, bed net use, and recent travel to forest areas. Blood was collected and prepared as a thick smear, and 30 μL were applied to filter paper for dried blood spots. Blood smears were interpreted by both local malaria clinic staff and national expert microscopists at the Bureau of Vector-Borne Diseases in Nonthaburi according to the current World Health Organization (WHO) guidelines.

We extracted genomic DNA (gDNA) from dry blood spots into 150 μL using 20% Chelex-100 (Bio-Rad, Richmond, CA) as outlined in the work by Plowe and others.9 We conducted pooling (1:4) of samples and real-time PCR as previously reported7 after validating the protocol with specimens containing as few as 10 parasites/μL. Briefly, we amplified the 18S Plasmodium rRNA gene in pools of gDNA (2 μL per sample) with the pan-species assay. We individually tested constituent samples from positive pools and amplified positive samples with the speciation assay. We modified the speciation assay so that the two multiplex reactions amplified P. falciparum/P. vivax and P. malariae/human GapDH, respectively. All reactions were amplified in duplicate, and all reaction plates included two positive samples and one negative control. All real-time PCRs were run with the Bio-Rad CFX96 Real-Time PCR System, and amplification curves were evaluated with Bio-Rad CFX Manager. Data were entered into Microsoft Excel 2010 (Microsoft, Redmond, WA) and analyzed in SAS, version 9.2.2 (SAS, Cary, NC).

Of 187 individuals studied, 126 individuals were identified through contact tracing, and the remaining 61 individuals were identified through high-risk group screening (Table 1). The majority of the study population was between the ages of 15 and 49 years (84.7%) and male (64.2%). Two-thirds were Thai citizens (65.3%); the rest were Cambodian (8.7%) or Burmese Mon (26.0%). The majority of foreigners (74.0%) were migrants living in Thailand for 6 months or more, and over one-half of the individuals were rubber plantation workers (62.6%). Self-reported adherence to bed net use was high. Almost all (94.0%) reported always using a bed net, and 94.3% of those individuals visiting forest areas in the past month reported that they took a bed net or insecticide-treated hammock.

Characteristics of a population cross-section at risk for malaria from Bo Rai district in Trat province, Thailand, in June 21–22, 2011

Self-reported malaria case in the 3 months preceding blood collection that was confirmed and treated at a malaria clinic or hospital.

Self-reported visit or stay overnight in forest areas in the past month.

Comparison of expert microscopy and real-time PCR results for malaria surveillance in 187 individuals from Bo Rai district in Trat province, Thailand in June 21–22, 2011

Sensitivity was calculated with real-time PCR as the gold standard.

The P. falciparum infection identified through contact tracing was in a 27-year-old Thai male fruit plantation worker who reported having had a confirmed case of malaria in the past 3 months. He had a parasite density of 240 parasites/μL detected by the blinded expert microscopist. The patient returned to the malaria clinic with symptoms before microscopy and PCR results were reported.

Two of three P. vivax cases were identified through high-risk group screening and were Burmese Mon male rubber plantation workers. The first case was a 27-year-old living in Thailand for less than 6 months; the second case was a 40-year-old living in Thailand for more than 6 months. These infections were only detected by microscopy after PCR results were known, with parasite densities of 32 and 48 parasites/μL, respectively. All three cases reported always using a bed net. No demographic or risk factor information was available for the third P. vivax case identified through contact tracing.

Sample preparation and analysis of 187 samples, including DNA extraction and PCR analysis, was completed rapidly (in 4 days) at the central laboratory. Results were reported to local malaria clinics 1 week after sample collection and allowed for prompt treatment and follow-up. The delay between sample collection and results because of transportation of samples could be remediated by installing PCR equipment at provincial malaria offices.

In summary, pooled real-time PCR can identify submicroscopic malaria cases that, as potential sources of transmission, must be treated for the success of elimination. Real-time PCR may present a consistent, accurate, and efficient tool for surveillance to assist malaria elimination in Thailand.