Micromorphology of the simpodial and sessil conidia of the S. brasiliensis strain Ss 265 developed on CMA media after 10 days of incubation at 25°C. Hyaline conidia simpodially arranged in a bouquet-like fashion at the ends of the conidiophores are shown in A. Globose dark pigmented sessile conidia are shown in details. (Scale bar: 3 μm). 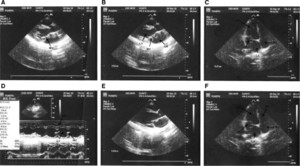 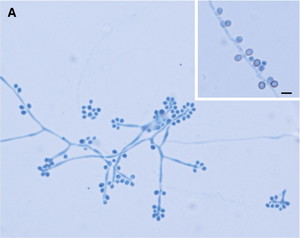 Disseminated sporotrichosis occurs in individuals with impaired cellular immunity, such as in cases of neoplasia, transplantation, diabetes, and especially, acquired immunodeficiency syndrome. This report presents a 32-year-old Brazilian human immunodeficiency virus (HIV)-infected patient who developed a protracted condition of disseminated sporotrichosis with endocarditis, bilateral endophthalmitis, and lymphatic involvement. He needed cardiac surgery to replace the mitral valve. Sporothrix brasiliensis isolates were recovered from cultures of subcutaneous nodules and mitral valve fragments. Species identification was based on classical and molecular methods. The patient received amphotericin B for 52 days and subsequently, oral itraconazole. He remains asymptomatic, and he is on maintenance therapy with itraconazole. Despite his positive clinical outcome, he developed bilateral blindness. To our knowledge, this case is the first report of endocarditis and endophthalmitis caused by S. brasiliensis.

Sporotrichosis has worldwide distribution, although most human and animal cases reported have been in Latin America, the United States, and Japan.1–3 Sporothrix schenckii is considered to be the classical agent for this mycosis. S. brasiliensis, S. globosa, and S. mexicana have recently been defined as separate species through molecular and phenotypic features and different geographical distribution. Only the first two are considered pathogenic. S. brasiliensis is commonly found in South America, especially in Brazil.4,5

Most infections occur through accidental implantation of infectious agents after traumatic skin contact with colonized material.3 Transmission also occurs through inhalation of infectious propagules and bites or scratches from several mammals like dogs, armadillos, and cats.6–10

This report aimed to present the clinical and evolutive features of an HIV-infected patient with sporotrichosis involving the mitral valve, eyes, and lymph nodes.

A 32-year-old male farmer was admitted to the Teaching Hospital in Uberaba, Minas Gerais, Brazil, in August of 2010. He complained of progressive bilateral visual deficit that had begun 2 months earlier. He had lost 14 kg but had not had fever or associated symptoms. There was no history of trips, skin injuries, or contact with animals, and he did not smoke or drink. At clinical examination, he looked eutrophic but presented disseminated subcutaneous small nodules that were invisible but evident to the touch. He had previously undergone ophthalmological outpatient examination showing exudative granulomatous-like yellow lesions in right eye chorioretinal structures, whereas left eye evaluation was hindered by pupillary occlusion. Toxoplasma gondii, Epstein–Barr, and Treponema pallidum antibody tests were negative, cytomegalovirus immunoglobulin G (IgG) antibody test was reactive, and enzyme-linked immunosorbent assay (ELISA) anti-HIV test was positive (confirmed using Western blot). Chest radiography was normal. The Mantoux test and lymph bacterioscopy for Mycobacterium leprae were both negative. CD4+ T-cell baseline and viral load levels were 560 cells/mm3 and 92,158 RNA copies/mL, respectively.

Amphotericin B was administered for 52 days, including 10 days on liposomal amphotericin. Control echocardiograms were normal. One year later, he is asymptomatic and receiving oral itraconazole and antiretroviral therapy. Despite this positive outcome, he developed bilateral blindness.

To study macroscopic and microscopic features, isolates were subcultured on PDA plates and cornmeal agar (CMA; 30 g corn, 15 g agar, 1 L tap water) for 10–12 days and incubated at 30°C in the dark. All experiments were run in triplicate. These data together were used as taxonomic characters applied to dichotomous keys for S. schenckii complex species as previously described.18 To compare phenotypic characteristics, the Brazilian S. brasiliensis type strain CBS 120339 was used.5

The macroscopic morphological characteristics of Sporothrix isolates resembled type strain CBS 120339. After 21 days of incubation at 30°C, colonies on PDA attained a diameter of 48.7 ± 0.06 mm; they were moist, glabrous, and creamy to dark brown. At 35°C and 37°C, after 21 days of incubation, the isolates had grown to colony diameters of 17.12 ± 2.10 and 8.96 ± 0.72 mm, respectively. They did not grow at 40°C. Microscopically, the isolates presented thin, sporulated, and septated hyaline hyphae on PDA after 7–12 days at 30°C and developed intercalary or terminal conidial clusters on sympodial conidiophores. The blastoconidia were round and dark (Figure 2).

Thermal dimorphism switching was achieved after several subcultures in Brain Heart Infusion (BHI, Becton, Dickinson and Company) agar and incubation at 37°C, thereby developing a creamy yeast-like colony. Carbohydrate assimilation tests were run in triplicate. The isolates were able to assimilate glucose and ribitol as the only source of carbon, and they did not assimilate raffinose or sucrose. Using morphological and physiological techniques, they were classified as S. brasiliensis.

Disseminated sporotrichosis cases have shown meningeal, respiratory, osteoarticular, lymphatic, and ocular involvement in both HIV-infected and non-HIV patients14,20–23; however, endocarditis involvement was not reported to date.

Our patient presented ocular symptoms as the first feature of systemic disease. Granulomatous uveitis was found in the first ophthalmological examination, and given the high prevalence of tuberculosis in Brazil, empirical therapy was started. On admission, after obtaining the patient's complete history, clinical examination showed disseminated subcutaneous nodules and mitral valve murmur. Culturing of subcutaneous nodule tissue yielded Sporothrix sp. isolates. Hence, ocular and cardiac lesions were presumptively correlated with this finding, and oral antifungal therapy was replaced by intravenous amphotericin B.

Granulomatous uveitis caused by S. schenckii infection has previously been reported. It is a protracted condition with poor outcomes, leading to total blindness in most cases.24–26 Our patient's evolution was similar, with bilateral endophthalmitis despite surgical procedures and systemic antifungal therapy, thereby confirming previously reported severity of ocular sporotrichosis and poor prognosis for eyesight. Our patient's ocular infection probably originated from hematogenous spread, although no fungus was recovered from blood cultures.23,27

Fungal endocarditis accounts for 1.3–6% of all infectious endocarditis cases. These are commonly severe, leading to high morbidity and mortality.28 Candida species are the most prevalent agents and are present in one-half to two-thirds of fungal endocarditis patients.28,29 This infection can occur through contaminated devices or liquids during continuous catheterization.30 Neutropenia, neoplasia, intravenous drug use, immunosuppressive therapy, and total parenteral nutrition are the most common risk factors.31,32 The second most common agent is Aspergillus sp. This agent is associated with heart valve surgery and disseminated aspergillosis, usually evolving to acute conditions of greater severity than Candida cases.33 Occasionally, endocarditis caused by rare fungal species has also been reported.34,35

Our patient received 2 weeks of oral itraconazole before fungal endocarditis was suspected. Cardiac surgery was immediately performed to replace the severely damaged mitral valve observed on echocardiograms. It could not be established whether the patient had any previous mitral valve lesion as a pre-disposing factor, but together with the ocular and cutaneous lesions, it is highly likely that persistent fungemia had occurred, despite negative blood cultures.

The guidelines and recommendations from different authors and centers dealing with fungal endocarditis patients indicate that the best outcomes are obtained through combining medical and surgical therapies.28,36,37 Although both ocular and cardiac surgery was performed, only mitral valve tissue could be cultured, again yielding Sporothrix sp. isolates and confirming cardiac involvement. In contrast, histopathological examination of subcutaneous nodules and mitral valve fragments did not show Sporothrix sp. infection. This finding is in line with previous descriptions from HIV patients and can be correlated with reduced numbers of microorganisms in the inflammatory process.12

To our knowledge, this case is the first report of endocarditis and endophthalmitis caused by S. brasiliensis. This species was recently recognized through molecular characteristics within the S. schenckii complex and is also considered pathogenic for humans and animals.5 According to molecular and epidemiological data, S. brasiliensis is mainly distributed in South America, especially in Brazil.