Number of An. darlingi collected per 24-hour period per collector and P. falciparum sporozoite infection rates (number positive/100 tested) for An. darlingi from Puerto Almendra, Peru, from October of 1996 to September of 1997.

Relationship between river level (m above sea level) and landing rates (number of An. darlingi captured per 24-hour period per collector) at Puerto Almendra, Peru, from October of 1996 to September of 1997. 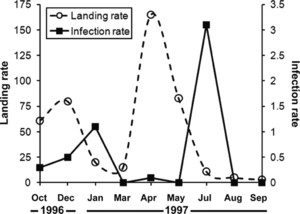 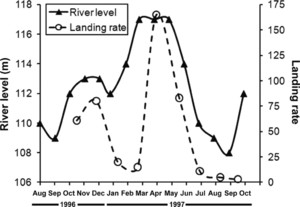 Determinants of Anopheles Seasonal Distribution Patterns Across a Forest to Periurban Gradient near Iquitos, Peru

As part of a field ecology study of arbovirus and malaria activity in the Amazon Basin, Loreto Department, Peru, we collected mosquitoes landing on humans at a forest site and inside and outside of residences and military barracks at periurban, rural, and village sites. We collected 11 Anopheles spp. from these four sites. An. darlingi, the principal malaria vector in the region, accounted for 98.7% of all Anopheles spp. collected at Puerto Almendra. Peaks in landing activity occurred during the December and April collection periods. However, the percent of sporozoite-positive Anopheles spp. was highest 1–2 months later, when landing activity decreased to approximately 10% of the peak activity periods. At all sites, peak landing activity occurred about 2 hours after sunset. These data provide a better understanding of the taxonomy, population density, and seasonal and habitat distribution of potential malaria vectors within the Amazon Basin region.