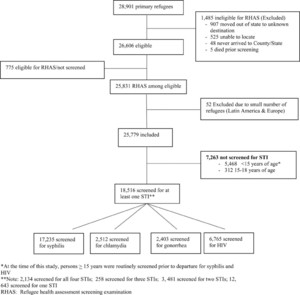 More than 340 million cases of bacterial and protozoal sexually transmitted infections (STIs) occur annually. Approximately 70,000 refugees arrive in the United States on a yearly basis. Refugees are a particularly disenfranchised and vulnerable population. The prevalence of Chlamydia and gonorrhea in refugee populations has not been described, and the utility of routine screening is unknown. We performed a descriptive evaluation of 25,779 refugees who completed a screening medical examination in Minnesota during 2003–2010. A total of 18,516 (72%) refugees were tested for at least one STI: 183 (1.1%) of 17,235 were seropositive for syphilis, 15 (0.6%) of 2,512 were positive for Chlamydia, 5 (0.2%) of 2,403 were positive for gonorrhea, 136 (2.0%) of 6,765 were positive for human immunodeficiency virus, and 6 (0.1%) of 5,873 were positive for multiple STIs. Overall prevalence of Chlamydia (0.6%) and gonorrhea (0.2%) infection was low, which indicated that routine screening may not be indicated. However, further research on this subject is encouraged.

Sexually transmitted infections (STIs) are an important cause of acute disease, infertility, and perinatal morbidity and mortality worldwide. The World Health Organization estimates that more than 340 million new cases of curable bacterial and protozoal STIs occur annually worldwide. In addition, it is estimated that up to 4,000 neonates worldwide develop blindness each year as a result of untreated maternal gonorrhea and Chlamydia infections.1 The highest number of STIs occurs in the regions of sub-Saharan Africa and southern and Southeast Asia, followed by, Latin America and the Caribbean.1 The direct and indirect health care costs and social/psychological effects are great. In resource-poor countries, STIs and subsequent complications are among the top 10 reasons for visits to heath care centers.1

There are approximately 10 million refugees worldwide.2 A total of 50,000–80,000 refugees resettle in the United States annually through the U.S. Refugee Resettlement Program.3 It was postulated that refugees would be at increased risk for STIs because of many factors associated with civil disruption and displacement, including poor socioeconomic status resulting in vulnerability to sexual exploitation, sexual violence and abuse, and lack of access to prevention and educational efforts. In addition, many areas where refugees originated or have lived have high baseline prevalence rates of STIs.1 Another factor that might be postulated to increase prevalence is the refugees arriving in the United States are increasingly originating in urban areas, rather than coming from organized refugee camps. These refugees tend to be excluded from refugee services provided to camp populations and are excluded from national efforts of host countries. The prevalence of STIs, particularly Chlamydia and gonorrhea, in refugee populations has not been systematically described in the literature. This short report focuses on the prevalence of Chlamydia and gonorrhea in this newly arriving refugee population.

All refugees resettling in the United States are required to undergo a medical examination before arrival to ensure the refugees are healthy and to prevent importation of communicable diseases. Certain STIs are considered inadmissible conditions and require treatment or a special medical waiver before migration. During the study period, the evaluation for STIs required examination and testing for syphilis (venereal disease research laboratory test or rapid plasma reagin) and HIV infection (effective January 4, 2010, HIV testing is no longer required for U.S. immigration).4 In addition, before departure, a history and physical examination for other STIs is required, although no testing is routinely performed (i.e., chancroid, gonorrhea, granuloma inguinale, lymphogranuloma venereum, and Chlamydia).5 Therefore, during the study, laboratory testing for HIV and syphilis was performed on all refugees ≥ 15 years of age before resettlement but testing for Chlamydia and gonorrhea were not performed.

The Department of Health and Human Services recommends that all refugees have a post-arrival medical screening examination. The components of this examination have traditionally been defined by each state and have varied across states. Although general national guidelines for STI diagnosis and treatment have been issued by the Centers for Disease Control and Prevention (CDC),6 there are no published data to confirm the appropriateness of these guidelines for this unique population. The goal of this study is to describe the overall prevalence of STIs in the newly arriving refugee population with particular attention to the prevalence of Chlamydia and gonorrhea.

Testing and reporting of STIs by providers during the domestic refugee health assessment was conducted according to medical guidelines issued by the State of Minnesota. During 2003–2010, the State of Minnesota guidelines were to retest for HIV and syphilis when overseas testing was not available, if extended time had lapsed between overseas examination and arrival to United States, or if there was a new clinical indication. Testing for gonorrhea or Chlamydia was left to the clinical judgment of the examiner.7 When performed, it was recommended that the Chlamydia and gonorrhea tests be performed by using urine nucleic acid amplification.

Screening results were reported to the Minnesota Department of Health database of refugee medical assessments, the Electronic System for the Health Assessment of Refugees (eSHARE),8 which has structured data fields for reporting gonorrhea, Chlamydia, HIV, and syphilis infections.

Refugees were categorized by sex and grouped into four age ranges: < 15 years, 15–25 years, 26–44 years, and ≥ 45 years. Population specific and regional data were analyzed. The regions included the Middle East, Eastern Europe, Southeastern Asia, or sub-Saharan Africa. We defined co-infection as having ≥ 2 STIs. To compare infection prevalence between groups, we used Fisher's exact test with a two-sided significance level of 0.05.

Human Research Protection Office of all institutions involved reviewed this evaluation and deemed the evaluation exempt from institutional review board requirements.

During the study period, more than 95% of eligible refugees arriving in Minnesota had results of the post-arrival medical screening examination reported to eSHARE7 and 18,516 (72%) of 25,779 were tested for ≥ 1 STI after arrival (Table 1). Data are reported according to region because of the low prevalence in specific populations. Persons from sub-Saharan Africa were most likely to be tested (80%), followed by persons from Eastern Europe (70%), the Middle East (60%), and Southeast Asia (57%). Syphilis was the STI most commonly tested (93%), followed by Chlamydia (14%), and gonorrhea (13%). Testing or diagnosis was not reported for any other STI. Although these infections could be reported under an “other” field, there is no specific field in eSHARE for reporting other STIs (e.g., lymphogranuloma venereum, chancroid). Chlamydia and gonorrhea tests were typically performed on the same persons; 2,360 persons were tested for Chlamydia (94% of Chlamydia tests) and gonorrhea (98% of gonorrhea tests).

Only 133 (92%) of 134 HIV-positive refugees with a special medical waiver were retested; 2 were negative.

To our knowledge, this is the first report of the prevalence rates of urogenital Chlamydia and gonorrhea in refugee populations arriving in the United States. The prevalence of Chlamydia (0.6%) was well below that of the general U.S. population (2.2%).9 However, when stratified by region, refugees from the Middle East had a rate of 3.3%, and three of four infections occurred in persons 15–25 years of age. Although the low STI prevalence rate is consistent with anecdotal reports from refugee health experts, it is counterintuitive given the theoretical risks of this population. Furthermore, the true prevalence of asymptomatic infection may even be lower given that clinicians did not report if refugees tested had symptoms during the medical screening evaluation.

The current CDC guidelines recommend annual screening for Chlamydia in sexually active females ≤ 25 years of age and women > 25 years of age with risk factors (e.g., new sex partner or multiple sex partners).6 Testing is also recommended in those with signs or symptoms of infection. The U.S. guidelines call for targeted screening of young women (i.e., < 25 years of age) at increased risk for infection who are sexually active and at increased risk for infection (e.g., women with previous gonorrhea infection, other STDs, new or multiple sex partners, and inconsistent condom use; those who engage in commercial sex work and drug use; women in certain demographic groups; and those living in communities with a high prevalence of disease).10,11 These data indicate that current recommendations in the United States for testing asymptomatic persons may not be appropriate for all newly arriving refugee populations. However, there still may be certain subpopulations in which STI prevalence is greater, and additional systematic evaluation of newly arriving populations are encouraged.

All refugees ≥ 15 years of age arriving in the United States during the study period were tested for HIV before departure. Although HIV was reported in 2% of newly arriving refugees, this finding does not represent the overall prevalence in this population because refugee arriving during this period needed a special waiver and were resettled to certain areas within the United States on the basis of their HIV status. A subsequent case–control study is being conducted to further elucidate the characteristics of the HIV-infected refugees compared with matched controls. Clinicians and public health professions need to be aware that because of a U.S. policy change, beginning on January 4, 2010, refugees (and immigrants) are no longer required to undergo mandated testing for HIV. Although this change did not effect our study period, clinicians should be aware of this change and that CDC highly encourages screening for HIV in newly arriving refugees (http://www.cdc.gov/immigrantrefugeehealth/guidelines/domestic/screening-hiv-infection-domestic.html).

This study had many limitations. Only those refugees arriving in Minnesota were included and they may not be representative of all refugee populations. In addition, these rates are low compared with most populations, and it is possible that refugees received antibiotics for other conditions that were effective against Chlamydia and/or gonorrhea, either over-the-counter or from health professionals. We were unable to ascertain the proportion of refugees in this study who were living in rural camps versus urban settings, and prevalence may vary between these populations. Additionally, selection of these persons may reflect a bias on the part of the examining physician. Only a little over half of those refugees from Southeast Asia and the Middle East were screened; refugees from other regions were more likely to be screened. Because the Minnesota State guidelines leave the decision to screen for Chlamydia and gonorrhea to the examiner, such judgments are subjective and may reflect a selection bias toward those who were symptomatic. Because only 10% of the overall arriving population was tested for Chlamydia and gonorrhea, we cannot conclusively state that the prevalences reported represent entire populations. However, it would be expected that the percentage of detected cases may have been over-represented in our sample because it may be assumed that clinicians were more likely to screen those with greater pre-test probability such as those with signs or symptoms and refugees. Furthermore, refugees who were symptomatic may have been more likely to agree to testing. Infections with other STIs if detected (e.g., trichomoniasis, lymphogranuloma venereum, chancroid) may not have been reported because of lack of a structured data field. Despite these limitations, these data are presented and further research is encouraged.

Despite limitations, this study provides results of screening for STIs among a large number of refugees and found substantially lower prevalence of infections than the authors anticipated. The authors believe it is unlikely that this finding is caused by bias. The current data suggest that the U.S. guidelines for screening Chlamydia and gonorrhea in the general population may not be appropriate for routine screening of newly arriving refugees. However, because of the short comings of this report, further investigation is encouraged.