Brain magnetic resonance imaging (MRI) performed following 14-day treatment of neurobrucellosis. (A) Marked reduction of the size of the ring lesion. (B) Sequential flare demonstrates the disappearance of the brain edema. 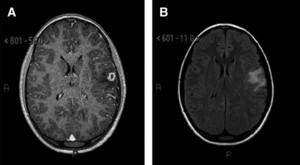 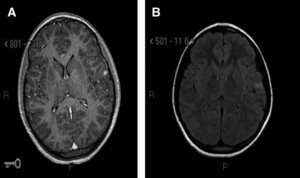 Neurobrucellosis is an uncommon complication of pediatric brucellosis. Acute meningitis and encephalitis are the most common clinical manifestations, however symptoms may be protean and diagnosis requires a high index of suspicion in patients from endemic areas. Diagnosis is often based on neurological symptoms, serology, and suggestive brain imaging because cerebrospinal fluid culture yields are low. Two cases of pediatric neurobrucellosis with unusual clinical and radiologic findings are presented.

In Israel Brucella melitensis is enzoonotic and pediatric infection is encountered almost exclusively among the Arab population who engage in animal husbandry.1 Farm animals are raised adjacent to the homestead and transmission occurs with exposure to goats and sheep or their unpasteurized milk products, explaining the similar incidence of pediatric brucellosis among males and females.1–3

We present two cases of childhood neurobrucellosis with uncommon clinical and radiological findings from a tertiary center in southern Israel and discuss the challenges in clinical and laboratory diagnosis, and the suggested treatment regimens.

A six-year-old female Bedouin child was admitted because of fever, headache, and recurrent vomiting. On admission she was moderately ill, pulse was 117 beats/minute, temperature was 37.4°C, blood pressure was 106/54 mm of Hg, and respiratory rate was 26 breaths/minute. Bilateral papilledema, nuchal rigidity, and a positive Kernig sign were observed with no other neurological signs. Results of investigations were white blood cells (WBC) 7.3×103/mm3, hemoglobin 9.5 g/dL, and platelets 230×103/mm3. Brain computed tomography (CT) revealed a widening of the lateral, third, and fourth ventricles, with a preserved midline. Lumbar puncture showed WBC 75 cells/mm3, of them 90% monocytes, protein 29 g/dL, glucose 25 g/dL (serum glucose 80 g/dL); Gram stain was negative. The cerebrospinal fluid (CSF) culture and two blood cultures were positive for Brucella spp., and serology results were immunoglobulin G (IgG) 1:160, IgM 1:480 for Brucella spp. in the patient's blood. A treatment regimen with intravenous gentamicin, cotrimoxazole, and rifampin was initiated and doxycycline was added 3 days later after an episode of fever. Gentamicin was discontinued after 2 weeks and the child was discharged in good condition. Cotrimoxazole rifampin and doxycycline were maintained for another 6 weeks. The child was observed in the outpatient clinic after 1 month by which time, papilledema had resolved. Therapy with doxycycline was continued for another 3 months. Neither relapses nor sequelae occurred.

A 13-year-old Bedouin female presented with a nonfebrile tonic-clonic seizure to the pediatric emergency room. Six months before presentation, she and two siblings received ambulatory treatment of brucellosis, which manifested as fever, arthralgia, and IgG for Brucella 1:5120. Upon the current admission a brain CT was performed, revealing a hypodense area relative to the surrounding left parietal tissue. Magnetic resonance imaging (MRI) showed a left parietal cortical ring lesion (Figure 1A) surrounded by vasogenic edema (Figure 1B). Anti-convulsive therapy with valproic acid was initiated and the patient was referred for surgical removal of the lesion the following month. On readmission for elective surgery, her convulsions had resolved, electroencephalogram was interpreted as normal, MRI findings were unchanged, but a fever of 38°C was documented. The patient was admitted to the pediatric ward to rule out neurobrucellosis. Physical exam was negative for meningeal signs and neurological deficits. Blood count was normal but chemistry revealed glutamate oxaloacetate transaminase 102 U/L and glutamic-pyruvic transaminase 90 U/L. Repeat brucellosis titer was IgG 1:320, and blood culture was positive for Brucella spp. Lumbar puncture was performed with the following parameters: WBC 5 cells/mm3, glucose 60 g/dL, and protein 28 g/dL. The CSF Rose Bengal test and culture were negative. A CSF sample was sent to a microbiological laboratory for molecular diagnosis amplifying a fragment unique to Brucella spp. from the gene that encodes for 16S rRNA but no significant amplification product was detected.8 The polymerase chain reaction (PCR) for herpes simplex virus was negative. Treatment of neurobrucellosis with gentamicin, doxycycline, and rifampin, was initiated even in the absence of microbiological confirmation from the CSF. Two weeks later, follow-up MRI showed reduction of the brain mass from 8 to 4 mm (Figure 2A) accompanied by a near resolution of the edema (Figure 2B). No new lesions were identified. The child was observed in the out-patient neurosurgical clinic with no complications and completed a treatment regimen of 2 weeks of gentamicin and a total 12 weeks of doxycycline and rifampin.

Both cases presented are of Bedouin children from rural townships in Southern Israel where goat and sheep are raised. Although data on the epidemiology of human brucellosis in southern Israel show that the incidence rate between 2002 and 2006 ranged between 9.6/100,000 and 17.3/100, 000 Negev residents, the average incidence rate in Bedouins was 68.4/100,000, reaching a peak of 100/100,000 in 2007 and 2008, and approaching incidence rates in neighboring Middle Eastern countries with less developed health systems (Yagupsky P, personal communication).

Although the pathogenesis is not clearly known, the possible mechanism of CNS invasion, may be phagocyte-facilitated invasion, because of the ability of Brucella spp. to persist in intracellular environment, avoiding mechanisms of apoptosis, prolonging the life of infected cells, and increasing the opportunity to enter the CNS.9

Microbiological confirmation of neurobrucellosis is often challenging. Whereas culture provides definitive and gold standard laboratory diagnosis, yield of cultures from CSF is poor (0–30% rate of positivity in three series of neurobrucellosis).2,10,11 Moreover, information on incubation time necessary for positive CSF cultures is lacking. Serological diagnosis in the CSF using the agglutination tests available in most laboratories has proved insensitive particularly in chronic and complicated cases.9 Indirect Coombs (antihuman globulin) test, an extension of standard agglutination tests, used for the detection of incomplete, blocking or non-agglutinating IgG, may be positive in CSF samples while tube agglutination tests are not.2,11 The test is time-consuming and labor-intensive and was not available in our laboratory. Enzyme-linked immunosorbent assay (ELISA) is considered superior to the agglutination tests in focal cases such as neurobrucellosis.9 It was recently recommended that laboratories apply two serological tests, namely Coombs and ELISA, in the CSF for a reliable diagnosis of neurobrucellosis if cultures are negative.9

The PCR for Brucella in our second patient was negative. The literature on potential of molecular identification to aid in diagnosis and monitoring of response to treatment is constantly increasing. Molecular assays are performed through DNA extraction from CSF, followed by amplification of a segment unique to Brucella spp. from the gene that codes for 16S rRNA, and other sequences.8,12 Limitations of PCR include varying sensitivities (50–100%) and lack of standardization.9

Neuroimaging in pediatric neurobrucellosis varies from normal studies to a variety of imaging abnormalities including inflammatory and vascular changes.2,5,6 Reports of hydrocephalus are scarce with one other report of hydrocephalus associated with neurobrucellosis described in an 11-year-old child who presented with ataxia and sphincter incontinence.5 Our second patient's radiological presentation was of a cerebral mass indistinguishable from a cerebral tumor. This presentation has been described, albeit rarely, in the imaging of neurobrucellosis.13

There is variability in the literature regarding optimal antimicrobial regimen and appropriate duration of treatment of pediatric neurobrucellosis. Regimens must include antibiotics that penetrate the hematoencephalic barrier, maintain good concentrations in the CSF, and maintain intracellular action. Regimens of three antimicrobials are advised for no less than 3 months. To decrease the incidence of relapse, therapy must include the combination of an aminoglycoside rifampin and doxycycline (trimethoprim/sulfamethoxazole replaces tetracyclines in children < 8 years of age and pregnant women).6,14

The prognosis of neurobrucellosis is good in most patients, with complete recovery within a few weeks to months after receiving adequate therapy; however, cases of severe neurologic sequelae have been reported.10

In conclusion, the two cases presented illustrated widely varying clinical involvement that can interfere with prompt diagnosis of pediatric neurobrucellosis. A high index of suspicion is warranted in patients from susceptible populations in endemic areas who present with neurological symptoms. Imaging abnormalities in neurobrucellosis are variable and may mimic other diseases. Anti-Brucella Coomb's test is apparently of great value in the diagnosis of neurobrucellosis, sometimes yielding the only positive serologic results from the CSF.