Fine, non-itching, red-colored eruptions developed over the abdomen on the second hospitalization day.

Conjunctival suffusion with subconjunctival hemorrhage (ou), which was suggestive of leptospirosis, developed on the second hospitalization day. 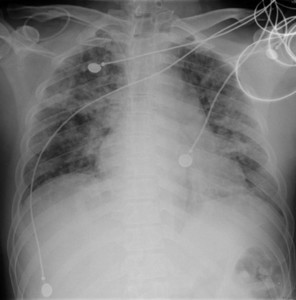 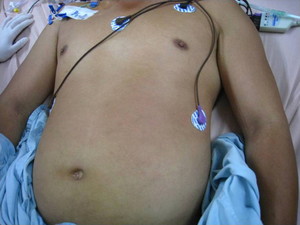 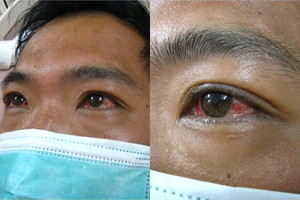 An immunocompetent 35-year-old male telecom company employee presented with fever and myalgia in early September 2009, a month after the moderate-strength Typhoon Morakot that caused a heavy rainfall in Taiwan. He was diagnosed with pneumonia with respiratory distress and shock (Figure 1). Intensive care with respiratory and inotropic support and broad-spectrum antibiotics with piperacillin/tazobactam were administered upon admission. He subsequently developed skin rash, conjunctival suffusion, and subconjunctival hemorrhage, which were suggestive of leptospirosis (Figures 2 and 3). Thus, empirical therapy with penicillin + ceftriaxone was initiated to treat leptospirosis and cover possible bacterial co-infection, although he could have been treated with either drug alone. His recovery was uneventful, and the microscopic agglutination test confirmed the diagnosis of leptospirosis.

Leptospirosis is a re-emerging worldwide zoonotic waterborne disease with protean manifestations and remains a diagnostic challenge. Leptospirosis has a low annual incidence in Taiwan (< 1/100,000) and is often associated with occupational exposure.1 However, outbreaks may occur after natural disasters including typhoons, heavy rain, and floods.2 Leptospirosis has diverse clinical courses, ranging from subclinical infection to fatal multiple organ failure. The microscopic agglutination test is time-consuming and timely treatment is valuable for patients with severe illness. Conjunctival suffusion is indicative of leptospirosis, and a high index of suspicion should be maintained in tropical and subtropical areas, particularly after typhoons.