Incidence of VL between 1990 and 2009 in the city of Parnamirim (bars) and the state of Rio Grande do Norte (lines) in Brazil.

Anti-leishmanial antibody and LST profiles by location. The percent of total was based on the percent of individuals falling into the infection profile based on 100% of individuals living in the region. The numbers of subjects were 103 in the urban, 115 in the periurban, and 101 in the rural regions. Based on the ML χ2 test, the profiles of infection were significantly different among the three areas. 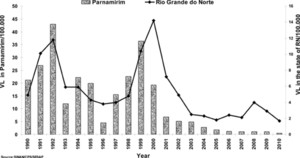 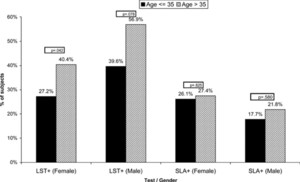 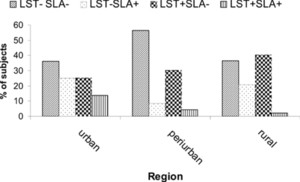 Visceral leishmaniasis (VL) is endemic in large cities in Brazil, including Natal. We determined the prevalence of asymptomatic human infection with Leishmania infantum chagasi and associated environmental risks around Natal. Infection was detected by Leishmania skin test (LST) and anti-leishmanial antibodies in humans and anti-leishmanial antibodies in dogs. Amongst 345 humans, 24.6% were seropositive, and 38.6% were LST-positive. Prevalence of positive serology was similar in both sexes and across all ages. However, positive LST responses increased with age, suggesting that LST is long-lasting and cumulative. Multinomial logistic analysis showed that LST response varied with location (P = 0.007) and that males were more frequently LST-positive (P = 0.027). Indicators of lower socioeconomic status associated significantly with human infection. Furthermore, there was geographic coincidence of seropositive humans and dogs (r = 0.7926, P = 0.011). These data suggest that dog and human L. i. chagasi infection are intimately interrelated in environmental conditions associated with low income.