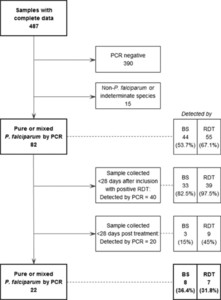 Pregnant women are highly susceptible to malaria infection and disease, which frequently leads to placental parasitemia, maternal and infant anemia, and low birth weight, all of which directly or indirectly increase the risk of maternal, fetal and infant death.1,2 The adverse effects of Plasmodium falciparum malaria in pregnancy are more marked in paucigravidae because of lack of previous exposure, and thus immunity, to parasite strains that can express receptors specific for placental sequestration.3,4 The latter factor is reflected in the observed reduction of incidence of microscopically detectable infections in peripheral blood and of symptomatic malaria episodes with increasing gravidity.5 Absence of detectable peripheral parasitemia and of symptoms can hide placental infections, which are linked to some of the more severe effects of malaria in pregnancy.6 Improved detection of such infections is critical for the reduction of the burden of malaria in pregnancy.7

Peripheral blood smears are poorly sensitive for malaria infections in pregnant women compared with the polymerase chain reaction (PCR) in high-transmission settings.5,8,9 Cross-sectional studies conducted at delivery in these contexts have shown that rapid diagnostic Tests (RDTs) detecting P. falciparum histidine-rich protein-2 (HRP2) are more sensitive than blood smears and appear to be reliable predictors of adverse outcomes of malaria in pregnancy.8,10,11 In the current study, women in the second or third trimester of pregnancy had frequent intermittent screening with blood smears, RDT, and species-specific nested PCR up to delivery. Standard diagnostic test indicators were determined for blood smears and RDTs with PCR as the gold standard.

The study was conducted concurrently with an ongoing randomized non-inferiority trial of Coartem® versus quinine for the treatment of uncomplicated malaria in pregnancy (Malaria in Pregnancy [MIP] study).12 The protocols for these studies were approved by the Faculty Research Ethics Committee and the Institutional Review Board of the Mbarara University of Science and Technology (Mbarara, Uganda), and the Ugandan National Council for Science and Technology (Kampala, Uganda). The MIP study protocol was also approved by the Comité de Protection des Personnes (Ile-de-France XI, Paris, France).

One hundred three pregnant women in the second or third trimester, of whom 31 also participated in the MIP study, were included in this study after documented informed consent was obtained. Women attending the Mother and Child Health Department of the Mbarara Regional Referral Hospital in Mbarara, Uganda were screened with RDTs and blood smears to detect peripheral malaria parasitemia. Slide-confirmed malaria episodes were treated with Coartem® or quinine. The pregnant women were followed-up, and all three tests were performed at weekly (pregnant women in the MIP study) or monthly (other pregnant women) intervals until delivery.

This study was conducted from October 2008 to June 2009. At inclusion and at every follow-up visit, blood samples were collected by fingerprick or by venipuncture if other tests were conducted for the MIP study. Blood samples were collected with EDTA as the anticoagulant. Fingerprick blood was collected in Microtainers® and venous blood in Vacutainers®. Blood smears were prepared and the RDT was performed immediately after blood collection. The remaining blood was centrifuged to harvest the erythrocyte pellet, which was stored at –80°C until PCR analysis. Giemsa-stained slides (10% v/v) were read at 1,000× magnification; 200 fields of the thick blood smear were read before declaring a slide negative. Ten percent of negative slides and all slides positive for trophozoites and/or gametocytes were read by two microscopists unaware of each other's results. A third read was performed to resolve cases of discordance (positive/negative, parasitemia difference > 50%, different species). The reported parasitemia was the average of the two closest results calculated as described.13

Paracheck Pf® (Orchid, Goa, India), an HRP2-based RDT, was procured directly from the manufacturer and performed according to the accompanying instructions. Procedures for preparation of blood samples for PCR were adapted from a published method.14 Nested PCRs were performed initially to screen for samples containing Plasmodium as described.15 Species of Plasmodium in positive samples were determined in separate species-specific nest 2 reactions.

All data were double-entered in Epidata version 3.1 (www.epidadta.dk) and cleaned by using Stata release 10 (Stata Corp LP, College Station, TX). Because pregnant women with a positive RDT result were encouraged to join the cohort, data obtained < 28 days after a positive RDT result at inclusion were removed from the analysis to eliminate selection bias. Results obtained < 28 days after treatment with Coartem® or Quinine were also censored to remove the effect of persistent antigenemia.

Further, because treatment with inefficacious drugs or drugs with some antimalarial activity can reduce parasitemia to submicroscopic levels, data obtained < 28 days from treatment with sulfadoxine-pyrimethamine and all data from pregnant women treated with cotrimoxazole prophylaxis were censored. Finally, results from PCR-confirmed pure non-P. falciparum or indeterminate species infections were not included in calculations. Calculations of sensitivity and specificity for blood smears and RDTs with PCR as the gold standard and comparisons of results were performed by using Epicalc version 1.02 (http://www.brixtonhealth.com/epicalc.html).

Results for the three tests were available from 487 pregnant woman visits. Data from 299 visits of 81 pregnant women were analyzed after censoring. Each pregnant woman had a median of 3 visits (range = 1–18 visits). There was no significant difference in percentage positivity by blood smear, RDT, or PCR in pregnant women followed-up weekly or monthly and there were no indications of variation in RDT performance. Species-specific nested PCR detected 22 P. falciparum infections in samples collected at these visits, of which only 8 and 7 were detected by blood smear and RDT, giving a sensitivity of 36.4% (95% confidence interval [CI] = 18.0–59.2%) and 31.8% (95% CI = 14.7–54.9%), respectively (Figure 1). The sensitivities of the two tests were not significantly different. Only one instance of a false-positive result was detected by blood smear but at a low parasitemia of 32 parasites/µL, giving a specificity of 99.6% (95% CI = 97.7–100%) for this test. Among 120 samples collected at visits < 28 days after antimalarial drug intake, PCR detected 20 P. falciparum infections, of which 9 were also detected by RDTs but only 3 by blood smears. Two false-positive results were also detected by RDTs.

The results reported are, to our knowledge, the first from a longitudinal study performed to evaluate RDTs in pregnant women before delivery. The low sensitivity of blood smears for detection of malaria in pregnant women obtained here is comparable to that in earlier reports. However, the estimated sensitivity of the RDT is similar to that of blood smears and lower than published estimates for HRP2-based tests, which were obtained from studies on samples collected only at delivery.8,10,11 The difference may be explained by longitudinal follow-up conducted in the current study, which enabled recording of antimalarial drug intake.

Elimination of all data obtained < 28 days from intake of drugs with antimalarial activity removed the bias which could potentially be introduced by persisting parasite antigen and/or by reduction of parasitemia to submicroscopic levels. The latter factor is especially pertinent for cotrimoxazole, which is commonly used to prevent opportunistic infections, and sulfadoxine-pyrimethamine, which is used for intermittent preventive therapy in pregnancy in Africa, which can cause malaria infections to remain at levels detectable by PCR but not by microscopy.5 In an RDT evaluation study in Ghana where antimalarial drug intake was also checked by an enzyme-linked immunosorbent assay in plasma, 35% of women had traces of pyrimethamine.8 It would be interesting to know the sensitivity of RDTs in this study if data from these women and from any others who reported antimalarial intake were censored.

Of the 9 samples collected < 28 days after antimalarial drug intake and showing positive results by RDT and PCR, 3 were collected ≤ 7 days after drug intake for a smear-positive malaria episode and likely contained persistent antigen. All three tests showed positive results for two samples. Of the remaining four samples, none of which were positive by blood smear, two were collected ≥ 14 days after drug intake for a blood smear–positive malaria episode with at least one intervening visit/sample where the RDT result was negative. The RDT showed a positive result 10 days before a microscopically detectable episode in one case and blood smears did not become positive up to delivery in one case.

In combination with the high specificity of RDTs (100% in data obtained after censoring and 98% in samples collected < 28 days after drug intake), these data appear to confirm that RDTs can detect low-level infections undetectable by microscopy in pregnant women.16 Furthermore, it enables speculation on use of RDTs for treatment monitoring in pregnant women if performed > 28 days after drug intake to reduce the possible effect of high initial peripheral blood parasitemia on antigen persistence. If the RDT result is positive after this interval, it may indicate a continuing placental infection requiring additional treatment.

In conclusion, our results indicate that RDTs would be suitable for replacing blood smears screening and treatment of malaria in pregnancy in this malaria-endemic setting by virtue of their ease-of-use compared with microscopy. The RDTs may also have some utility in monitoring treatment. However, given the small population assessed here, these findings need to be confirmed in statistically robust studies conducted in settings of different endemicities and with other RDTs, some of which outperformed Paracheck Pf® in systematic testing.17 It would be important in such studies to take into consideration the previous drug history. Field-based diagnostic tools with improved sensitivity are urgently required for diagnosis of malaria during pregnancy.