Representative images of wells containing the 3D7 parasite and varying concentrations of artemisinin. Images obtained on the Opera with the number of spots determined using the Acapella software with a spot detection algorithm. Relative % inhibition values were also calculated.

Stability of signal after 4′,6-diamidino-2-phenylindole (DAPI) staining of assay plates containing the 3D7 strain of parasite. The response to in-plate controls of plates (mean ± SEM of 16 wells) read up to 24 hours after DAPI staining is shown in (A). Dose response curves of artemisinin read 24 and 48 hours after DAPI staining (B). Each point represents the mean ± SEM of 4 wells. 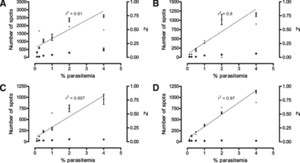 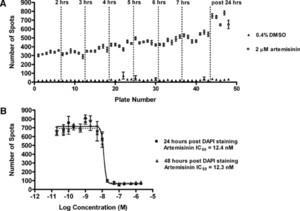 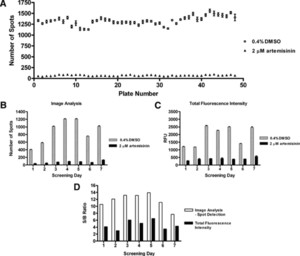 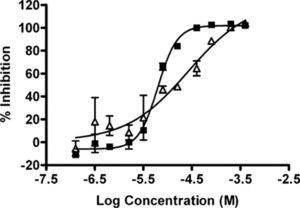 With the increasing occurrence of drug resistance in the malaria parasite, Plasmodium falciparum, there is a great need for new and novel anti-malarial drugs. We have developed a 384-well, high-throughput imaging assay for the detection of new anti-malarial compounds, which was initially validated by screening a marine natural product library, and subsequently used to screen more than 3 million data points from a variety of compound sources. Founded on another fluorescence-based P. falciparum growth inhibition assay, the DNA-intercalating dye 4′,6-diamidino-2-phenylindole, was used to monitor changes in parasite number. Fluorescent images were acquired on the PerkinElmer Opera High Throughput confocal imaging system and analyzed with a spot detection algorithm using the Acapella data processing software. Further optimization of this assay sought to increase throughput, assay stability, and compatibility with our high-throughput screening equipment platforms. The assay typically yielded Z'-factor values of 0.5–0.6, with signal-to-noise ratios of 12.