Time and space distribution of HealthMap alerts for the first one hundred days of the Haiti cholera outbreak. Each HealthMap alert (marked by a circle colored corresponding to its date) is precise placed to an exact latitude and longitude, and could also be generalized to the administrative areas it falls within. The 10 departments (largest administrative jurisdiction) of Haiti and 41 arrondissements (next largest administrative jurisdiction) are outlined in dark and light borders, respectively.

Daily reported case data for all departments from the Haiti Ministry of Health (solid), daily volume of primary HealthMap alerts (dashed), and daily volume of Twitter posts containing the word “cholera” or “#cholera” (dotted). Each curve has an initial peak at the onset of the outbreak (dark grey), and a peak during the time that Hurricane Tomas affected Haiti (medium grey). The first 100 days of the outbreak are shaded in light grey. Ministère de la Santé Publique et de la Population (MSPP) case counts peak again in late December, although HealthMap and Twitter volume only have daily variations during this time.

Variation of effective reproductive number based on the number of days of data used to calculate the growth rate. Change in estimates of the effective reproductive number in phase 1 (October 20–30) as the number of days used to extract growth rate during exponential growth periods is varied (A, HealthMap; B, Twitter; C, Ministère de la Santé Publique et de la Population [MSPP] cases; D, MSPP hospitalizations). Growth rate was extracted from the epidemic curves using from 4 to 12 days of data and the serial interval was varied from 1 to 9 days as in Figure 4. 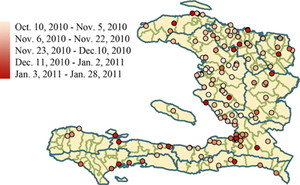 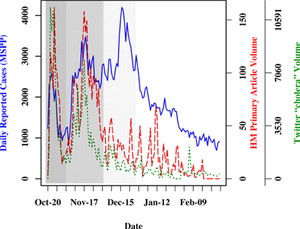 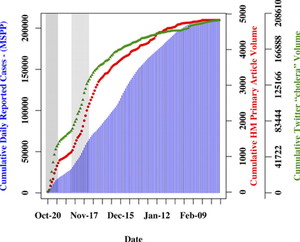 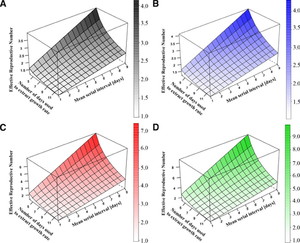 During infectious disease outbreaks, data collected through health institutions and official reporting structures may not be available for weeks, hindering early epidemiologic assessment. By contrast, data from informal media are typically available in near real-time and could provide earlier estimates of epidemic dynamics. We assessed correlation of volume of cholera-related HealthMap news media reports, Twitter postings, and government cholera cases reported in the first 100 days of the 2010 Haitian cholera outbreak. Trends in volume of informal sources significantly correlated in time with official case data and was available up to 2 weeks earlier. Estimates of the reproductive number ranged from 1.54 to 6.89 (informal sources) and 1.27 to 3.72 (official sources) during the initial outbreak growth period, and 1.04 to 1.51 (informal) and 1.06 to 1.73 (official) when Hurricane Tomas afflicted Haiti. Informal data can be used complementarily with official data in an outbreak setting to get timely estimates of disease dynamics.