Map of Haiti showing the locations of Port-au-Prince, Léogâne, and Jacmel and the epicenter of the January 12, 2010 earthquake. 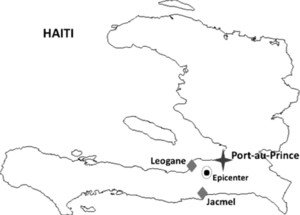 Haiti's Ministry of Public Health and Population collaborated with global partners to enhance malaria surveillance in two disaster-affected areas within 3 months of the January 2010 earthquake. Data were collected between March 4 and April 9, 2010 by mobile medical teams. Malaria rapid diagnostic tests (RDTs) were used for case confirmation. A convenience sample of 1,629 consecutive suspected malaria patients was included. Of these patients, 1,564 (96%) patients had malaria RDTs performed, and 317 (20.3%) patients were positive. Of the 317 case-patients with a positive RDT, 278 (87.7%) received chloroquine, 8 (2.5%) received quinine, and 31 (9.8%) had no antimalarial treatment recorded. Our experience shows that mobile medical teams trained in the use of malaria RDTs had a high rate of testing suspected malaria cases and that the majority of patients with positive RDTs received appropriate antimalarial treatment. Malaria RDTs were useful in the post-disaster setting where logistical and technical constraints limited the use of microscopy.