Phylogeny of DENV-1 isolated from five missionary travelers that visited Haiti in October of 2010. Each taxon represents a single virus isolate and is labeled with the geographical origin and collection year; an additional specimen identifier is also included in specimens isolated from travelers to Haiti. Eighteen E gene sequences obtained from GenBank were included to support tree topology and identify genotypes. Three major genotypes are marked by brackets: American/African, South Pacific, and Asian. Taxa labels and GenBank accession numbers are available in Supplemental Table 1. 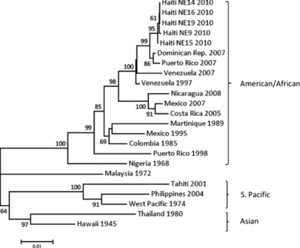 A Cluster of Dengue Cases in American Missionaries Returning from Haiti, 2010

Dengue is an acute febrile illness caused by four mosquito-borne dengue viruses (DENV-1 to -4) that are endemic throughout the tropics. After returning from a 1-week missionary trip to Haiti in October of 2010, 5 of 28 (18%) travelers were hospitalized for dengue-like illness. All travelers were invited to submit serum specimens and complete questionnaires on pre-travel preparations, mosquito avoidance practices, and activities during travel. DENV infection was confirmed in seven (25%) travelers, including all travelers that were hospitalized. Viral sequencing revealed closest homology to a 2007 DENV-1 isolate from the Dominican Republic. Although most (88%) travelers had a pre-travel healthcare visit, only one-quarter knew that dengue is a risk in Haiti, and one-quarter regularly used insect repellent. This report confirms recent DENV transmission in Haiti. Travelers to DENV-endemic areas should receive dengue education during pre-travel health consultations, follow mosquito avoidance recommendations, and seek medical care for febrile illness during or after travel.