Genetic diversity of the microsatellite m3502 in nine districts of Sri Lanka. The number of positive samples from each district is mentioned in brackets. The districts from where the samples were collected are mentioned, together with the geographical location of the districts; N = North, NW = North-west, NC = North-central, E = East, and SE = South-east. 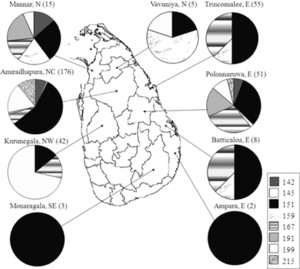 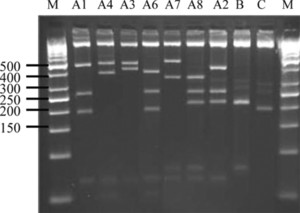 The geographical distribution of genetic variation in Plasmodium vivax samples (N = 386) from nine districts across Sri Lanka is described using three markers; the P. vivax merozoite surface protein-3α (Pvmsp-3α) gene, and the two microsatellites m1501 and m3502. At Pvmsp-3α, 11 alleles were found with an expected heterozygosity (He) of 0.81, whereas at m1501 and m3502, 24 alleles (He = 0.85) and 8 alleles (He = 0.74) were detected, respectively. Overall, 95 unique three locus genotypes were detected among the 279 samples positive at all three loci (He = 0.95). Calculating the pairwise fixation index (FST) revealed statistically significant population structure. The presence of identical 2-loci microsatellite genotypes in a significant proportion of samples revealed local clusters of closely related isolates contributing to strong linkage disequilibrium between marker alleles. The results show evidence of high genetic diversity and possible population substructure of P. vivax populations in Sri Lanka.