Assay procedure and interpretation of the mixed-species infections malaria antigen (FVM Ag) rapid diagnostic test kit to diagnose mixed-species malaria. A, Assay procedure. First, the blood sample is loaded onto the hemolysis pad, and four drops of buffer (see Materials and Methods section for composition) is dispensed onto the sample pad. Results are visible after 15–20 minutes. B, Interpretation of the results. Absence of any bands (–) indicates an uninfected sample. Presence of a red band at T1 or T2 indicates a single Plasmodium falciparum–positive (Pf(+)) or P. vivax-positive (Pv(+)) sample, respectively. If there are bands at T1 and T2, the sample is a mixed-species infection (Pf/Pv(+)). 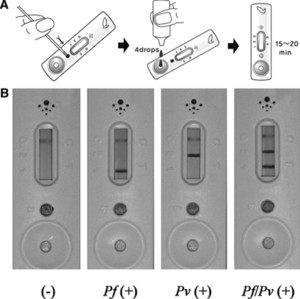 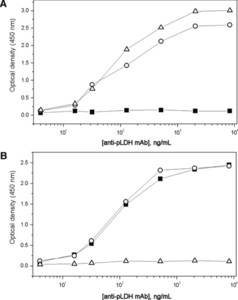 Plasmodium falciparum and P. vivax malaria are endemic to many parts of the world and humans can be co-infected with both species. Because each Plasmodium species has different biological and clinical characteristics, accurate differentiation of the infecting species is essential for effective treatment. Therefore, we produced three monoclonal antibodies that recognize the lactate dehydrogenase of P. falciparum, P. vivax, or both to develop the first P. falciparum, P. vivax, and mixed-species infections malaria antigen detection kit. The detection limits of this kit were 150 and 250 parasites/μL for P. falciparum and P. vivax, respectively, and the kit was able to detect mixed-species infections. The sensitivity and specificity of this kit was assessed with 722 clinical specimens. Our results showed that its sensitivities for P. falciparum, P. vivax, and mixed-species infection were 96.5%, 95.3%, and 85.7%, respectively. In addition, its specificity was high (99.4%).