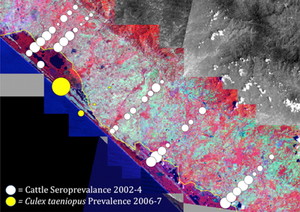 Enzootic Venezuelan equine encephalitis virus (VEEV) has been known to occur in Mexico since the 1960s. The first natural equine epizootic was recognized in Chiapas in 1993 and since then, numerous studies have characterized the etiologic strains, including reverse genetic studies that incriminated a specific mutation that enhanced infection of epizootic mosquito vectors. The aim of this study was to determine the mosquito and rodent species involved in enzootic maintenance of subtype IE VEEV in coastal Chiapas. A longitudinal study was conducted over a year to discern which species and habitats could be associated with VEEV circulation. Antibody was rarely detected in mammals and virus was not isolated from mosquitoes. Additionally, Culex (Melanoconion) taeniopus populations were found to be spatially related to high levels of human and bovine seroprevalence. These mosquito populations were concentrated in areas that appear to represent foci of stable, enzootic VEEV circulation.

These viruses were used in subsequent laboratory experiments based on their shared ecology with VEEV.31

Subsequent to the work reported here, a breeding colony of Cx. taeniopus was successfully established and these mosquitoes were experimentally shown to be highly permissive to oral infection by and able to transmit equine-virulent subtype IE VEEV strains isolated during and after the 1993 Chiapas outbreak.32