Respondents perceptions of the effectiveness of treatment of ulcers, Ghana. 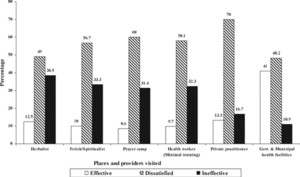 This study examined sociocultural features of help-seeking for Buruli ulcer–affected persons with pre-ulcers and ulcers in a disease-endemic area in Ghana. A sample of 181 respondents were purposively selected. Fisher's exact test was used to compare help-seeking variables for pre-ulcers and ulcers. Qualitative phenomenologic analysis of narratives clarified the meaning and content of selected quantitative help-seeking variables. For pre-ulcers, herbal dressings were used to expose necrotic tissues and subsequently applied as dressings for ulcers. Analgesics and left-over antibiotics were used to ease pain and reduce inflammation. Choices for outside-help were influenced by the perceived effectiveness of the treatment, the closeness of the provider to residences, and family and friends. Health education is required to emphasize the risk of self-medication with antibiotics and the importance of medical treatment for pre-ulcers, and to caution against the use of herbs to expose necrotic tissues, which could lead to co-infections.