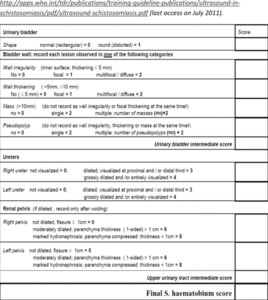 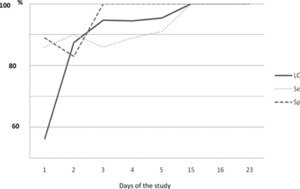 Learning Curve of Vesico-Urinary Ultrasonography in Schistosoma haematobium Infection with WHO Practical Guide: A “Simple to Learn” Examination

In developing countries, it is difficult to rally a radiologist to conduct field studies. Here, we report how a radiologist taught a clinician to carry out the ultrasound examination as defined by the World Health Organization (WHO) record sheet for Schistosoma haematobium related lesions. In a population infected with S. haematobium, the learner and teacher performed two ultrasound exams and the results were compared. One hundred thirty-two children were prospectively included, during 8 ultrasonography sessions split over 23 days. After 51 examinations the learner's sensitivity was above 90%. After the fifth session the specificity reached 100% (results remained stable until the end of the study period). This study shows that a clinician can quickly learn how to carry out a simple ultrasound examination to gather the items needed for the follow-up of S. haematobium related lesions, suggesting that clinicians could implement networks of ultrasound-based surveillance on the field.