Milalani village households that were included in spatial analyses and Nimbodze pond.

Rainfall at the Msambweni District agricultural office from 2001 to 2009. 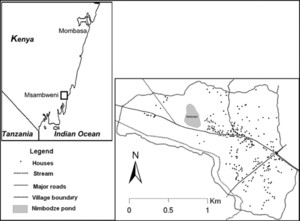 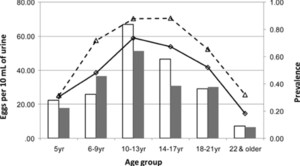 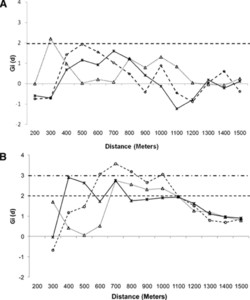 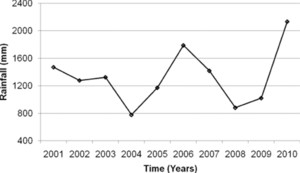 We analyzed temporal changes in spatial patterns of active Schistosoma haematobium infection in different age groups and associated them with ponds infested with Bulinus snails. A major drought between 2001 and 2009 resulted in drying of ponds that were known sources of infection, and we detected very few or no snails in ponds that were infested in the past. The household-level spatial pattern of infection for children of various age groups in 2009 was contrasted with historical data from 2000. The significant local clustering of high- and low-infection levels among school-aged children that occurred in 2000 was absent in 2009. We attribute the disappearance of significant clustering around historical transmission hot spots to a decade-long drought in our study area. The implications of extreme weather and climate conditions on risk and transmission of S. haematobium and their relevance to control strategies are discussed.