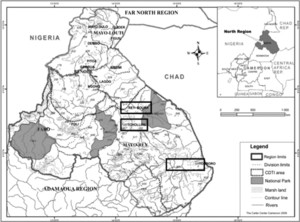 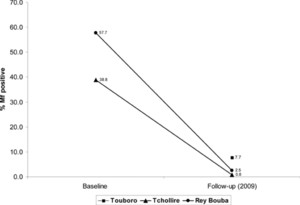 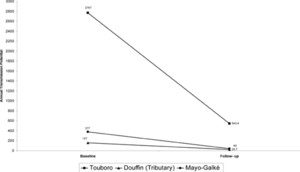 Seventeen Years of Annual Distribution of Ivermectin Has Not Interrupted Onchocerciasis Transmission in North Region, Cameroon

We studied onchocerciasis transmission and impact on ocular morbidity in three health districts in North Region, Cameroon, where annual mass ivermectin treatment has been provided for 12–17 years. The studies, which took place from 2008 to 2010, consisted of skin snips for microfilariae (mf), palpation examinations for nodules, slit lamp examinations for mf in the eye, and Simulium vector dissections for larval infection rates. Adults had mf and nodule rates of 4.8% and 13.5%, respectively, and 5.5% had mf in the anterior chamber of the eye. Strong evidence of ongoing transmission was found in one health district, where despite 17 years of annual treatments, the annual transmission potential was 543 L3/person per year; additionally, children under 10 years of age had a 2.6% mf prevalence. Halting ivermectin treatments in North Cameroon now might risk recrudescence of transmission and ocular disease.