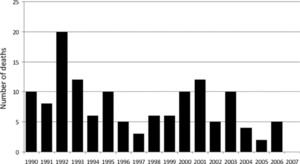 Despite the endemic nature of Entamoeba histolytica infection in the United States there is a lack of data on amebiasis-related mortality. We analyzed national death certificate data from 1990 to 2007 to assess the occurrence of amebiasis-related deaths and determine demographic and regional associations. A total of 134 deaths were identified. Mortality rates were highest in males, Hispanics, Asian/Pacific Islanders, and persons 75 years of age and older. An association with human immunodeficiency virus infection was also observed. A declining trend of amebiasis deaths was noted over the 18-year study period. Over 40% of fatal amebiasis cases occurred in residents of California and Texas. United States-born persons accounted for the majority of amebiasis deaths; however, all of the fatalities in Asian/Pacific Islanders and 60% of the deaths in Hispanics were in foreign-born individuals. Although uncommon, amebiasis-related deaths routinely occur in the United States.

Amebiasis, caused by the intestinal protozoan parasite Entamoeba histolytica, affects an estimated 50 million people and causes 100,000 deaths globally each year.1 The disease is common in tropical areas with poor sanitary conditions; however, amebiasis is endemic in the United States. In 2007, 411 amebiasis cases were reported in California alone and the prevalence of E. histolytica infection in the United States has been estimated to be 4%.2

The majority of infections with E. histolytica are asymptomatic or cause mild disease; however, some cases develop invasive disease that can include extra-intestinal infections that may result in severe and potentially fatal illnesses.3 Extra-intestinal amebic abscesses are most commonly located in the liver, but the lung and brain may also be affected. Patients who develop an invasive fulminant amebic colitis have a particularly grave prognosis, with over 50% mortality.4

The United States multiple cause of death data from the National Center for Health Statistics were reviewed for the period 1990–2007. Medical conditions listed on death certificates from 1990 to 1998 and 1999 to 2007 were coded in accordance with the International Classification of Diseases, 9th Revision (ICD-9) and ICD-10, respectively. Amebiasis deaths were identified by ICD-9 codes 006.0–006.9 and ICD-10 codes A06.0-A06.9. We included data on all United States residents who died with amebiasis recorded as the underlying cause of death or as a contributing cause of death. Population data for deriving mortality rates were obtained from the Census Bureau.

From 1990 to 2007 a total of 134 amebiasis deaths in United States residents were recorded (Table 1). Age-adjusted mortality rates were higher in males (0.042/106) than in females (0.018/106) with males more than two times as likely to die of amebiasis than females (adjusted rate ratio = 2.3, 95% CI, 1.7–3.2). Hispanics (0.13/106) and Asian/PIs (0.076/106) had the highest amebiasis mortality rates with adjusted rate ratios of 7.0 (95% CI, 5.5–8.9) and 4.0 (95% CI, 3.1–5.1), respectively, compared with whites (Table 1). The majority of amebiasis deaths (> 70%) occurred in persons > 45 years of age with the highest rates noted in persons > 75 years of age (Table 1). Although site of infection was often unspecified (71, 53%), amebic liver abscess was recorded in 32 (23.9%) of the decedents. Amebiasis deaths fluctuated throughout the 18-year period studied. The maximum number of deaths (20) observed during this time interval occurred in 1992, with an apparent decrease in the numbers of amebiasis deaths during the years 2004–2007 (Figure 1). Thirty states recorded amebiasis fatalities with California (36, 27%) and Texas (22, 16%) having the highest numbers of deaths. A large majority of amebiasis deaths (90, 67.2%) occurred in United States-born persons, however 42 (31.3%) fatal cases were identified among foreign-born individuals, and 20 of who emigrated from Mexico. Mean age did not differ between United States-born (57.4 years) and foreign-born persons (58.8 years) and no gender differences were observed (65.6% and 64.3% males, respectively). Human immunodeficiency virus (HIV) infection was a coexisting condition in 14 (10.4%) of amebiasis deaths and was more common than in the control, non-amebiasis group (matched OR = 7.7, 95% CI, 3.16, 18.77). Other comorbid conditions that occurred more frequently among fatal amebiasis cases included alcohol abuse (five deaths) and tuberculosis (two deaths), however small numbers make interpretation of these findings difficult.

Amebiasis deaths, adjusted rates, and rate ratios by sex, race, and age in the United States 1990–2007

– for gender and race ethnicity.

The apparent increased risk of amebiasis mortality observed in males may reflect higher infection rates with E. histolytica in men who have sex with men (MSM), a group recognized to be at increased risk.5 Gender differences in amebiasis, including the lower occurrence of invasive disease in females, have been attributed to the apparent increased complement-mediated inactivation of E. histolytica in females.6 This may also contribute to reduced mortality in women. The increased mortality risk noted in Asians/Pacific Islanders and Hispanics, most of whom were foreign born, presumably reflects greater exposure to E. histolytica in their country of origin before emigration and upon return trips to visit friends and relatives.

The observed increased risk of amebiasis mortality in persons > 75 years of age may be a result of declining immune function and increased prevalence of comorbid diseases. Increasing age has previously been identified as a potential risk factor for fatal amebic liver abscess in case series.7

We observed an association between amebiasis death and HIV co-infection, and the possibility of an increase in invasive disease among persons with HIV has been previously suggested.8,9 However, whether HIV is a risk factor for invasive disease is unclear and the observed association may simply reflect the greater likelihood of exposure and infection with E. histolytica among MSM who are also at increased risk of HIV infection. We found the co-occurrence of previously recognized risk factors for E. histolytica including alcohol abuse and tuberculosis; however we lacked sufficient power to adequately assess these conditions.

The higher number of amebiasis deaths identified in California and Texas is not unexpected given their large populations and sizable number of immigrants from E. histolytica-endemic areas, particularly Mexico and other parts of Latin America and Asia. The proximity of these states to the Mexican border also promotes frequent travel to such areas.

The occurrence of amebiasis deaths in persons born in the United States reflects either authochthonous E. histolytica transmission or travel-related infection. Because death certificates do not have information on travel history, we are unable to determine whether United States-born decedents acquired infection locally or abroad. Amebic liver abscess in persons born in the United States has been previously reported and Boggild and colleagues documented a rate of amebiasis infection of 8.5 cases/1,000 persons among Canadian travelers.8,10

Diagnosis of invasive amebiasis may be delayed in patients with negative stool microscopies and false negative serologic tests. Furthermore, imaging studies cannot reliably distinguish amebic from pyogenic abscess and histologic identification of E. histolytica trophozoites in tissue can be challenging.11,12 Such delays in diagnosis may be associated with a worse prognosis. Haque and colleagues13 recently reported high sensitivity (97%) using real-time polymerase chain reaction of urine and saliva samples for E. histolytica infection, and such a test may improve the diagnosis of invasive disease.

Our findings should be interpreted with caution. Although mortality records are a useful source of population-based data for understanding the burden of disease, death certificates may be incomplete and multi-factorial causes of death may lead to underreporting. Furthermore, data are subject to coding errors and both census data and inter-census population estimates used for the calculation of rates may possess some uncertainty.14

Fatal amebiasis may be more common than is currently appreciated. Because delayed diagnosis can increase the risk of amebiasis-related death, physicians should be aware that males, Asian/Pacific Islanders, Hispanics, persons 75 years of age and older, and those with HIV infection may have a higher risk of severe and fatal disease. Given the sizeable number of amebiasis deaths in United States-born persons, and the risk of travel-related amebiasis, food and water precautions should be advised for individuals traveling to E. histolytica-endemic areas.