Examples of chemoprophylaxis recommendations for a hypothetical traveler: selected destinations in Latin America 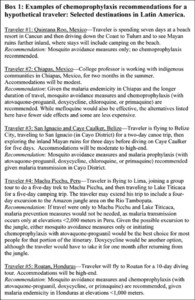 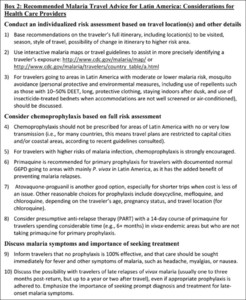 Because of recent declining malaria transmission in Latin America, some authorities have recommended against chemoprophylaxis for most travelers to this region. However, the predominant parasite species in Latin America, Plasmodium vivax, can form hypnozoites sequestered in the liver, causing malaria relapses. Additionally, new evidence shows the potential severity of vivax infections, warranting continued consideration of prophylaxis for travel to Latin America. Individualized travel risk assessments are recommended and should consider travel locations, type, length, and season, as well as probability of itinerary changes. Travel recommendations might include no precautions, mosquito avoidance only, or mosquito avoidance and chemoprophylaxis. There are a range of good options for chemoprophylaxis in Latin America, including atovaquone-proguanil, doxycycline, mefloquine, and—in selected areas—chloroquine. Primaquine should be strongly considered for nonpregnant, G6PD-nondeficient patients traveling to vivax-endemic areas of Latin America, and it has the added benefit of being the only drug to protect against malaria relapses.