Flowcharts of enrollment for pediatric (A) and adult (B) study groups. 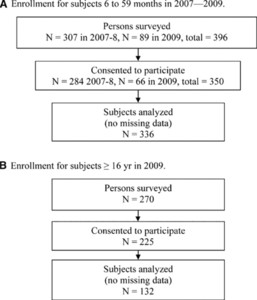 Anemia and Helicobacter pylori Seroreactivity in a Rural Haitian Population

Anemia is a significant health concern worldwide and can be the result of nutritional, environmental, social, and infectious etiologies. We estimated the prevalence of anemia in 336 pre-school children and 132 adults in the rural Central Plateau of Haiti and assessed associations with age, sex, household size, water source, sanitation, and Helicobacter pylori seroreactivity using logistic regression analysis; 80.1% (269/336) of children and 63.6% (84/132) of adults were anemic. Among children, younger age was associated with increased prevalence of anemia (adjusted odds ratio [aOR] = 4.1, 95% confidence interval [CI] = 1.5–11.1 for children 6–11 months compared with children 48–59 months). Among adults, 50.8% were H. pylori-seropositive, and seropositivity was inversely associated with anemia (aOR = 0.4, 95% CI = 0.2–0.9). Anemia prevalence in this region of Haiti is very high and not attributable to sanitary conditions or a high prevalence of H. pylori infection.

Anemia is a serious global health concern that affects one-quarter of the world's population and 40% of pre-school–aged children.1–3 It is associated with increased susceptibility to infection, decreased work productivity, and delayed physical and cognitive development.3–6 In the developing world, the most common causes of anemia are micronutrient deficiencies, parasitic diseases, and inherited disorders of hemoglobin.7 Helicobacter pylori, an inflammatory gastric bacterial infection especially prevalent in developing countries,8–10 has been implicated as a possible etiology for anemia.11,12 Haiti's Central Plateau is a particularly impoverished region with a high prevalence of anemia.13,14 Because the identification of etiological factors would aid anemia interventions, we conducted a cross-sectional study of pediatric and adult subjects visiting mobile clinics in the rural Central Plateau of Haiti to estimate the prevalence of anemia and look for associations with sanitary conditions and H. pylori infection.

This study was a cross-sectional study conducted at mobile clinics organized by Project Medishare in November 2007, 2008, and 2009 in the Central Plateau of Haiti. In 2007 and 2008, children 6–59 months of age were recruited. Preliminary analyses found a high prevalence of anemia in these children, and therefore, in November of 2009, data collection was expanded to include adult subjects and examine H. pylori seroreactivities as a potential risk factor for anemia. Project Medishare is a non-profit organization based in Miami, FL and Thomonde, Haiti, that shares human and technical resources between countries to deliver healthcare and development services to rural Haitian communities.15 The Institutional Review Board of Emory University and the Director of the Ministry of Public Health for the Central Plateau of Haiti approved the study. Kreyol speaking interpreters informed all participants of the purpose, procedures, risks, and benefits of the study, and we obtained written consent from all adults and from guardians of all subjects less than 18 years of age. No compensation was provided to the patients for participation in the study.

A convenience sample of participants was recruited during 4-day free mobile clinics organized by Project Medishare for Haiti. In 2009, the most common reasons for presentation to the adult clinic were generalized pain, well-woman check-up, vision problems, hypertension, and malnutrition. In the same year, the most common reasons for presentation to the pediatric clinic were intestinal parasites, anemia, rash, and upper respiratory infection (Leeds I and Zaeh S, unpublished data). Each mobile clinic took place within the La Hoye area of the Central Plateau and provided basic medical screening and treatment, with referrals to local hospitals when necessary. All subjects arriving for care at the mobile clinics were approached for enrollment. Exclusion criteria included refusal of consent, presentation with severe medical conditions that necessitated urgent care, and age less than 6 months. Using a standard questionnaire, Kreyol-speaking staff conducted interviews with adult participants and caretakers of minor participants. Information was collected on village of residence, number of persons per household, source of drinking water, water purification practices, and location of defecation. For children, anthropometric measurements included height or length using a wooden measuring board accurate to 0.1 cm (Irwin Shorr Productions, Olney, MD) and weight to the nearest 0.1 kg using a digital scale (Seca Corp, Hanover, MD).

Data sources for the 6–59 months subgroup included surveys conducted in 2007–2009, and measured exposures included sex, age, water source, water treatment, location of defecation, number in household, stunting, underweight, wasting, and H. pylori seroreactivity (2009 only). For this subgroup, age was divided into five categories: 6–11 months, 12–23 months, 24–35 months, 36–47 months, and 48–59 months. Z scores for height for age/length for age (HAZ), weight for age (WAZ), and weight for height/weight for length (WHZ) were calculated using the 2009 World Health Organization (WHO) growth standards (Anthro macro for SAS). Stunting was defined as HAZ < −2, underweight was defined WAZ < −2, and wasting was defined as WHZ < −2.

The primary study outcome was anemia. Anemia was defined according to WHO hemoglobin cutoffs: < 11.0 g/dL for children 6–59 months, < 12.0 g/dL for women, and <13.0 g/dL for men.4 Unadjusted association of exposures with anemia was assessed using χ2 or Fisher exact tests for contingency tables. Unadjusted odds ratios with 95% Wald confidence intervals were obtained using unadjusted logistic regression models. Adjusted odds ratios were obtained using a multivariate logistic regression model for each study group (6–59 months and ≥16 years). Potential confounders of variables crudely associated with anemia were identified by assessing crude associations between variables that were considered to be possible confounders.

Variables that were associated with anemia in the crude analysis either by statistical significance or meaningful magnitude of association (including potential confounders) and variables previously shown to be associated with anemia (sex and anthropometric measures of nutritional status) were retained in the multivariate models. The multivariate model for the pediatric group included sex, age, household size, and malnutrition indicators. A multivariate model including H. pylori, which was collected only in 2009, was performed on the 2009 subgroup. The multivariate model for the adult group included sex, age, and H. pylori. Colinearity among covariates in the multivariate models was evaluated using linear regression and was not found to be present. Interaction terms for sex with other covariates were dropped from the adult multivariate model by backward elimination. Interaction terms for study year with other covariates were dropped from the pediatric multivariate model by backward elimination. In secondary analyses, linear regression models with hemoglobin as a continuous outcome and polytomous logistic regression models with two categories of anemia (mild = hemoglobin from 9.0 to age- and sex-specific cutoff; moderate to severe = hemoglobin less than 9.0) as outcomes were evaluated. Statistical analyses were conducted using SAS version 9.2. A P value ≤ 0.05 was considered statistically significant.

There was no meaningful difference in the prevalence of anemia between male (81.1%) and female (79.1%) children (P = 0.64) (Table 2). In the unadjusted analysis, children 6–11 months were more likely to be anemic with an unadjusted odds ratio of 4.1 (95% confidence interval [CI] = 1.5–11.1) compared with children 48–59 months. Subjects 12–23 months were also more likely to be anemic, but this association was not statistically significant (odds ratio [OR] = 2.3, 95% CI = 0.9–5.4, P = 0.07). There were no statistically significant differences based on sex, water source, water treatment, defecation location, household size, anthropometric measurements, H. pylori seropositivity, or study year. In the multivariate analysis, children 6–11 months and 12–23 months were still more likely to be anemic than those children 48–59 months, with adjusted ORs of 4.5 (1.6–12.4) and 2.4 (1.0–5.9, P < 0.05), respectively. As in the unadjusted models, no variable besides age was significantly associated with anemia. In a multivariate regression model of the 2009 subsample, there remained no statistically significant association of H. pylori with anemia. Models using hemoglobin as a continuous outcome or multiple anemia categories as outcomes did not change the main findings.

The higher prevalence of anemia in the 6- to 23-month group was particularly concerning, because the cognitive effects of anemia during this period of critical brain development may be irreversible.4,19 This age group is especially vulnerable to anemia because of increased iron metabolism and the shift from breastfeeding to table foods.3,7,20,21 A 2004 study of the nutrient content of traditional complementary table food in Haiti found inadequate densities of iron, zinc, or vitamin A.22 Although we found a high prevalence of malnutrition and poor sanitation among both the pediatric and adult populations studied, we did not find an association of anemia with stunting or wasting. This result contrasts with previous studies that found associations between severe forms of anemia and poor growth,23–25 and it may implicate a non-nutritional etiology for anemia in our study population, such as infection, inflammation, or inherited blood disorders.

Although the prevalence of H. pylori antibodies in adults was similar to other studies,26,27 it was surprising that there was an inverse association between anemia and H. pylori seroreactivity. This finding contrasts with previous studies that have reported a positive association.12,28 In addition, meta-analyses of randomized control trials of H. pylori eradication have indicated that eradication can increase hemoglobin levels.12,28–30 However, one study of pregnant women on Pemba Island, Zanzibar, found a positive association between hemoglobin concentration and H. pylori bacteria load.31 Farang and others31 suggest that high bacterial load infection enhances hemoglobin concentrations by increasing the production of stomach acid, and low bacterial load infections correspond to advanced gastric atrophy, resulting in impaired iron absorption. It is possible that the majority of subjects in our study had high bacterial load infection, resulting in the observed correlation between anemia and H. pylori seroreactivity. It is also possible that we observed an inverse association because of an unmeasured confounding variable (e.g., socioeconomic status, location, or inherited disease). Additional investigation of our Haitian population, including measurements of bacterial load and iron status indicators, would expand our understanding of the relationship between anemia and H. pylori infection.

Our study had several limitations that restrict the generalizability of the results. The population examined was a convenience sample composed of patients likely less healthy than those people in the general population of the Central Plateau. The small pediatric sample size may have limited this study's power to detect associations in the logistic regression models. In addition, the rapid H. pylori antibody test used indicated current or past infection, which could possibly overestimate the prevalence of infection, thus minimizing the association between H. pylori and anemia. Some studies indicate that stool antigen tests are more sensitive and specific for current H. pylori infection, especially in children.32 Finally, the number of subjects recruited was significantly larger than the number with complete data because of the logistical challenges of data collection at a mobile clinic (Figure 1). As a result, we cannot make wider conclusions about the prevalence of anemia in the Central Plateau of Haiti or the causes of anemia. Nevertheless, this study is a unique glimpse at an understudied and underserved population.

In developing countries, the impact of anemia may be significantly diminished through public health interventions such as deworming programs, food assistance, iron-fortified complementary foods,22 iron supplementation,33,34 and home food fortification with micronutrient powders.14,35–39 Given the high prevalence of anemia and malnutrition in this population, it is obviously appropriate to study the effects of public health interventions such as micronutrient fortification powders,37 AK-1000 (Akamil) fortified home supplement,40 deworming,41 and maternal education on infant nutrition.20

Finally, the devastating January 2010 earthquake and the subsequent cholera epidemic have likely exacerbated the situation and increased the prevalence of anemia and malnutrition in this rural Haitian population. Although there have been many efforts in Haiti surrounding infectious disease and disaster management, these findings highlight the urgent need for additional study of the etiologies of malnutrition and anemia in rural populations and targeted public health interventions.