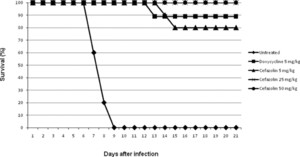 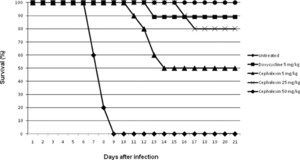 Third generation cephalosporins are commonly used in the treatment of leptospirosis. The efficacy of first generation cephalosporins has been less well-studied. Susceptibility testing of 13 Leptospira strains (11 serovars) to cefazolin and cephalexin was conducted using broth microdilution. Median minimal inhibitory concentration (MIC) for cefazolin and cephalexin ranged from < 0.016 to 2 μg/mL (MIC90 = 0.5 μg/mL) and from 1 to 8 μg/mL (MIC90 = 8 μg/mL), respectively. Efficacy of cefazolin and cephalexin in an acute lethal hamster model of leptospirosis was studied. Survival rates for cefazolin were 80%, 100%, and 100%, and survival rates for cephalexin were 50%, 80%, and 100% (treated with 5, 25, and 50 mg/kg per day for 5 days, respectively). Each treatment group showed improved survival compared with no treatment (P < 0.01), and none of the therapies, regardless of dose, was statistically significantly different than doxycycline. These results support a potential role for first generation cephalosporins as alternative therapies for leptospirosis.

Leptospirosis is an acute febrile illness caused by spirochetes of the genus Leptospira. In humans, leptospirosis typically manifests as a self-limiting acute febrile syndrome, but it may progress to life-threatening disease. Leptospirosis has emerged as a growing threat to human health, with disease increasing in incidence in rural and urban environments in both undeveloped and developed countries.1 Outbreaks of leptospirosis occur after flood or natural disasters but also in association with increasing rat burden in the slums of large cities.1–4

Leptospirosis has been traditionally treated with intravenous penicillin in severe cases and oral doxycycline in milder presentations.5 Guidelines produced by the International Leptospirosis Society and World Health Organization in 2003 recommended high-dose intravenous penicillin for severe disease and oral amoxicillin, ampicillin, doxycycline, or erythromycin for less severe disease.6 Subsequent clinical trials from Thailand support the use of ceftriaxone, cefotaxime, and azithromycin as well in this zoonotic infection.7–9

MIC values are given in micrograms per milliliter.

In this study, we evaluate the activity of two commonly used first generation cephalosporins, cefazolin and cephalexin, both in vitro in our broth microdilution susceptibility testing system and in vivo in an acute hamster model of leptospirosis.

Parenteral formulations of doxycycline (Bedford Laboratories, Bedford, OH) and cefazolin (West-Ward Pharmaceutical Corporation, Eatontown, NJ) were purchased from their manufacturers for use in animal studies. Research-grade cephalexin (for use in animals and in vitro), cefazolin, and doxycycline were purchased in powder form from Sigma-Aldrich (St. Louis, MO). All drugs for animal studies were diluted to appropriate concentrations to allow for administration of each dose in a volume of 0.5 mL (5 mg/kg doxycycline or 5, 25, or 50 mg/kg cephalexin or cefazolin based on mean animal weight per group). All reconstituted drug solutions were stored at 4°C in the dark between uses, and they were allowed to come to room temperature before administration.

Using our previously developed model, 74 female golden Syrian hamsters (Mesocricetus auratus) weighing 80–110 g (Harlan, Indianapolis, IN) were inoculated intraperitoneally (IP) with 0.5 mL EMJH medium containing 105 leptospires (L. interrogans serovar Canicola/Portlandvere strain CA-12-029/CDC Ni 1808).15–17 On study days 2–6, groups of 10 animals were treated by daily IP injection with cefazolin or cephalexin in concentrations of 5, 25, or 50 mg/kg. A group of five hamsters was left untreated as a negative control, and a group of nine hamsters was treated with doxycycline (5 mg/kg, IP, daily) as positive control.16 All hamsters were observed multiple times a day during the 21-day study period, and any study animal showing significant pain or distress or characteristics of a moribund state was humanely euthanized. Blood cultures were obtained from each hamster at the time of death. Study was conducted as approved by our Institutional Animal Care and Use Committee and monitored by the facility veterinarian to ensure compliance with ethical standards of animal care.

SPSS version 18.0 was used to create Kaplan–Meier plots for each study group. Survival differences between study groups were compared by the log rank test. P values < 0.05 were considered significant.

Broth microdilution susceptibility testing revealed consistently lower MICs with cefazolin compared with cephalexin (Table 2). Median cephalexin MICs were 1–8 μg/mL for the strains tested. Both cefazolin and cephalexin improved survival in hamsters with acute leptospirosis compared with untreated controls (P < 0.01) (Figures 1 and 2). The overall survival for each of the cefazolin and cephalexin groups was not significantly different from the survival of the doxycycline control group (P > 0.05). As expected, all untreated animals died by day 8 after infection, whereas 89% (8/9) of doxycycline controls survived to day 21. On the final day of the study, the remaining animals in the doxycycline control group were noted to be well and without evidence of disease. Through the observation period, these remaining animals maintained or gained weight appropriately. Blood from all untreated hamsters grew Leptospira in culture, but blood from the doxycycline-treated controls did not. This group included the doxycycline group animal that was euthanized on day 13 of the study. Animals in the cefazolin treatment groups remained healthy until halfway through the treatment period, at which time two animals in the 5-mg/kg group required euthanasia. Blood cultures from one of two animals that did not survive to day 21 grew Leptospira. Although five animals in the low-dose (5 mg/kg) cephalexin treatment group did require euthanasia because of their moribund appearance by day 13, the animals in this treatment group that survived until the end of the study had recovered enough to seem healthy and behaved appropriately. At the time that the study was terminated, all 8 surviving animals in the cephalexin 25-mg group and 10 animals in the 50-mg group appeared healthy, had maintained weights, and were appropriately interactive. Blood cultures of three hamsters that did not survive to day 21 grew Leptospira (two in the 5-mg/kg treatment group and one in the 25-mg/kg treatment group).

Based on recent clinical trials, the third generation cephalosporins, cefotaxime and ceftriaxone, have emerged as preferred drugs for the treatment of severe human leptospirosis. The usefulness of other cephalosporins is not as clear. Ceftiofur, a third generation drug used in veterinary medicine, has been shown to be effective in experimental disease in cattle, but this drug was unable to clear chronic infection in swine.18,19 We have previously shown many of these antimicrobials to produce low MICs in vitro (Table 1), and in this study, we show that the first generation cephalosporins, cefazolin and cephalexin, have low MICs as well (Table 2). These MICs seem to translate to efficacy for both these agents in our animal model of acute leptospirosis. For cefazolin, these data are quite supportive of probable efficacy in human disease. The MICs produced are many dilutions below the levels of cefazolin achievable with intravenous dosing20 and well below established breakpoints for cefazolin against the Enterobacteriaceae and Staphylococcus species (susceptibility MIC ≤ 8 μg/mL).21 The clinical applicability for cephalexin is more difficult to ascertain with these results. The MICs noted are much higher for cephalexin than seen for cefazolin, and achievable levels of this typically oral antimicrobial are much lower than those levels seen with parenterally dosed cefazolin.22 The use of intraperitoneal dosing in our animal model may have unrealistically improved the efficacy of cephalexin. Animals treated in the study by Alexander and Rule11 with single oral doses of cephalexin (10, 40, or 160 mg/kg) did not survive. Lack of survival with the 160-mg/kg dose was attributed to colitis, but clearly, the 10- and 40-mg/kg doses did not rescue animals; however, lack of survival might be attributed to the fact that only a single dose was given in their study.

The proper role of first generation cephalosporins in the treatment of leptospirosis is not clear. Cefazolin could be used in penicillin-allergic patients who tolerate cephalosporin, especially in circumstances where third generation cephalosporins are unavailable. Patients who receive cefazolin for other indications before suspicion of leptospirosis can be assumed to have been effectively treated with this drug. When and whether to use oral cephalexin is much less clear. In the absence of other agents with known efficacy, one might treat patients with the drug, but based on our results, we do not recommend cephalexin for the therapy of leptospirosis when other agents are available.