(A) Initial ulceration on the posterior and lateral right thigh measuring 3 × 4 cm. (B) Scar at the end of treatment 3 months later. 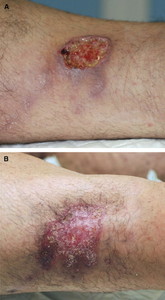 Buruli ulcer is a tropical skin disease caused by Mycobacterium ulcerans. Its mode of transmission is not yet clearly understood. We report here a cutaneous ulcer in a European traveler in South America resulting from a coinfection detected specifically for Mycobacterium ulcerans and Leishmania braziliensis DNA with real-time polymerase chain reaction. This observation of a unique cutaneous ulcer raises the issue about possible modes of transmission of those two pathogens by the same vector.

Buruli ulcer (BU), a tropical skin disease caused by Mycobacterium ulcerans that can lead to extensive destruction of skin and soft tissue, has recently emerged as an increasingly prevalent infectious disease. The M. ulcerans infection is a major public health problem in Western and Central Africa, whereas in Australia, it occurs at low levels. A few sporadic cases are reported in South America. The mode of transmission of M. ulcerans remains unclear. Mucocutaneous leishmaniasis caused by Leishmania braziliensis is observed exclusively in South America and is transmitted by sandfly bites.

We report here the first well-documented case of a unique cutaneous ulcer resulting from coinfection with M. ulcerans and L. braziliensis in a tourist recently returned from South America, and we discuss the possibility of a common vector in the transmission.

A 31-year-old French man with no significant medical history was admitted to the dermatology department at the University Hospital of Angers, France, on February 16, 2009 with extensive ulceration of the right thigh. It had first appeared several weeks previously near the end of a 4-month trip to Argentina, Chile, Bolivia, and Peru from September 2008 to January 2009. It was his first long expedition to the Amazonian region. On admission, he had a deep, painful ulceration (3 × 4 cm) on the posterior and lateral aspects of the right thigh. The ulcer base was budding and oozing, and slight fibrin deposits were visible in the periphery. The borders were slightly inflamed and raised. The lesion was surrounded by an erythematous inflamed plaque (Figure 1). Clinical examination found an ascending lymphangitis reaching the right groin with a lymphadenopathy. The patient was apyretic but complained of asthenia. He mentioned several bites on his right thigh, one by a tick and several by mosquitoes that he identified as sandflies and had confirmed by inhabitants. All bites had occurred in a small village of Bolivia, Bermejo, situated between Santa Cruz and Samaipata. A week after November 2008, he stayed in Rurrenabaque, where he went out for a walk in the jungle and had bathed in fresh water on Beni River. The patient reported no other bites by insects, other bugs, or aquatic creatures.

Routine hematological and biochemical tests were normal, including white blood cell count (7,500 with 4,200 neutrophils), kidney and liver function tests, electrophoretogram, and serum C reactive protein concentration. A human immunodeficiency virus (HIV) antibodies test was negative. Laboratory testing showed no inflammation. Histological examination of the ulceration and its margins showed epithelioid and gigantocellular granulomatous inflammation with necrosis of the dermis and hypodermis. No microorganism was visible on Periodic Acid Schiff, Ziehl, or Grocott staining.

M. ulcerans was also sought in the biopsy sample. Tissues were ground, homogenized in 50 mM NaOH solution, and heated at 95°C for 15 minutes. DNA was purified with the QIA quick purification kit (Qiagen, Courtaboeuf, France) using the manufacturer's recommendations. M. ulcerans DNA was detected by Taqman real-time PCR on a MX3000 thermocycler (Stratagene, Dresden, France) that targeted the IS2404 sequence and the ketoreductase B (KR) domain of the mycolactone polyketide synthetase (mls) gene. Oligonucleotide primers and Taqman probes were described previously.2

M. ulcerans PCR was positive for both targets. Bacilli were estimated by quantitative PCR for about 100 per 1 mL ground tissue.

After the positive PCR results for M. ulcerans, a systemic antibiotic regimen began, combining amikacin (1,000 mg/day), rifampicin (1,200 mg/day), and ciprofloxacin (1,000 mg/day). Clear but incomplete clinical improvement was observed after 3 weeks of treatment; the ulcer diameter decreased, and both the inflammatory plaque and lymphangitis disappeared. Cultures and PCR at 1 month were negative for M. ulcerans.

Treatment of leishmaniasis started after the Leishmania species was identified. The patient received liposomal Amphotericin B (AmBisome) at a total dose of 18 mg/kg; it was administered as 3 mg/kg daily from day 1 to day 5 and then, as a booster on day 10. This drug was chosen because of its short duration and excellent tolerance, especially for the treatment of visceral leishmaniasis. The ulceration disappeared without surgery after 3 months of this regimen. A distant relapse 3 months later on both tonsils was confirmed by positive PCR for L. braziliensis. After tonsillectomy, he received meglumine antimoniate (Glucantime) at a dose of 4.5 g/day combined with pentoxifylline for 1 month. The patient is now free of symptoms.

BU is now the third most common mycobacterial infection in humans after tuberculosis and leprosy.3 BU is now recognized by the World Health Organization (WHO) as among the neglected tropical diseases, and the WHO is supporting a vast research program to better understand the modes of transmission, develop diagnostic methods, and define specific treatment protocols.

Common in rural humid and tropical areas, it is far more widespread in West and Central Africa, but also, parts of Southeast Australia had several outbreaks of BU disease.4 More rarely, cases are also reported in Central and South America, including Peru, Brazil, Bolivia, Surinam, French Guiana, and Mexico.5–8 BU is probably rare in those countries, but it is also misdiagnosed and mistaken for leishmaniasis, another more prevalent and better known chronic ulcerative disease. After M. ulcerans inoculation, cutaneous lesions appear as broad painless ulcers and thus, are ignored by patients. The production of mycolactone, a toxin that is the only virulence factor known at this time, is responsible for the cytotoxic effect on skin tissues, generally resulting in an ulcerative lesion with undetermined edges.

We report here the first well-documented case of cutaneous ulcer resulting from a coinfection of M. ulcerans and L. braziliensis. One previous coinfection was briefly described in a series of eight BU cases in Peru.6 Our case points out that BU must be considered in travelers returning from the New World with chronic ulcerative disease. The coinfection with Leishmania suggests the possibility that both infections share the same vector.

The exact mode of transmission of BU remains unclear. M. ulcerans has been detected by PCR in a suite of environmental samples, such as biofilms, algae, aquatic snails, and small fish, but also in aquatic hemiptera (Naucoridiae and Belostomatidae), which could bite humans accidentally.4 An experimental model of BU disease with laboratory mice showed that the salivary glands of a water bug, Naucoris cimicoides, could be colonized by M. ulcerans.9 Moreover, the isolation of M. ulcerans from the water strider (Gerris sp.) enhances the hypothesis that aquatic water bugs are implicated as possible reservoirs or vectors of M. ulcerans.2 Another hypothesis is that contaminated water may infect humans through skin lesions and minor abrasions.10 The role of mosquitoes as biological vectors is still controversial.11 However, the recent epidemiological reports and correlative studies describing the presence of M. ulcerans DNA in adult mosquitoes is of significant interest, because they suggest that mosquitoes may serve as biological or mechanical vectors or as environmental reservoirs for M. ulcerans disease in Australia. A recent Australian study suggested that, in BU-endemic regions, mosquitoes become colonized or passively contaminated when they come into contact with M. ulcerans in the environment, and then, they transmit it to humans living nearby.12 It was also reported when salt marsh mosquitoes trapped in multiple locations near the area of a BU outbreak were tested; the presence of M. ulcerans in pools of mosquito DNA with three separate PCR targets, including IS2404, were confirmed.13

Mucocutaneous leishmaniasis, exclusively observed in South America, is caused by L. braziliensis and transmitted by sandfly bites. Our case of coinfection suggests a possible common vector, although secondary infection of the sandfly bite with contaminated water while bathing cannot be ruled out. In those countries where BU does not seems to be endemic yet, it could be interesting to consider similar studies to those studies conducted in Australia to test for M. ulcerans in sandflies by PCR.