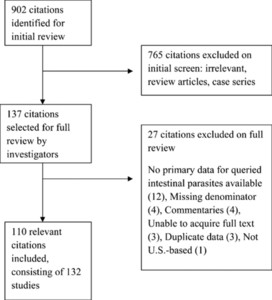 Soil-Transmitted Helminthiasis in the United States: A Systematic Review—1940–2010

The epidemiology of soil-transmitted helminth infections (hookworm, Trichuris trichiura, Ascaris lumbricoides, and Strongyloides stercoralis) in the United States is poorly understood. To gain understanding of the status of disease, a systematic review was performed to assess the prevalence of soil-transmitted helminth infections in the United States. Of all studies reviewed, 14 were designated as high-quality. High-quality studies were published from 1942 to 1982 and showed that infection was prevalent throughout the southern United States and Appalachia as recently as 1982, finding that hookworm (19.6%), T. trichiura (55.2%), A. lumbricoides (49.4%), and S. stercoralis (3.8%) affected significant percentages of the population. However, because the most recent high-quality studies were published over 25 years ago, the literature does not provide sufficient data to assess current endemic transmission. Because the status of disease remains unclear, there is a need for additional studies to determine if soil-transmitted helminths remain endemic in the United States.

Up to one-third of the world's population, many of them children, may be infected with intestinal helminths, principal among them hookworm, Trichuris trichiura, Ascaris lumbricoides, and Strongyloides stercoralis. These intestinal infections may result in malnutrition, iron-deficiency anemia, and malabsorption, and they can be complicated by intestinal obstruction and in the case of S. stercoralis, hyperinfection and disseminated disease that may result in death.1 Additionally, stunting of growth and delays in cognitive development are a frequent consequence of infection.2 Soil-transmitted helminth infections are neglected infections of poverty. This group of parasitic infections that also includes Chagas disease, cysticercosis, toxocariasis, toxoplasmosis, and trichomoniasis are parasitic diseases that cause significant morbidity in those people infected, disproportionately impact impoverished persons, and are poorly characterized in the United States.3

Preferred reporting items for systematic reviews and meta-analyses (PRISMA) criteria were applied for this review.6 A comprehensive literature search in MEDLINE/PUBMED (1960 to March 2011) with the medical subject headings (MeSH) intestinal diseases, parasitic/epidemiology, ascariasis, hookworm infections, trichuriasis, and strongyloidiasis was performed. Analysis was restricted to human studies occurring within the United States with no language restrictions. To include literature describing imported infection, the MeSH terms refugee/statistics and health status were also used. Studies were included if they met all of the following criteria: (1) reported data were systematically collected in a defined population, (2) new data were presented, and (3) prevalence of at least one of the queried intestinal parasites was reported. Studies were initially selected based on their titles and abstracts, and then if appropriate, full text was obtained. To identify additional studies, reference lists of selected articles as well as literature reviews were hand-searched, and all articles cited by included studies were reviewed. No study was included if the date of publication was before 1940 to improve likelihood of full text access. If an article reported more than one unique study, each study was considered separately. Authors were contacted whenever possible for clarification if data were incomplete or unclear.

The following data were abstracted as available: first author, year of publication, sample size, population age and ethnicity/race, type of parasitological testing performed, and number of positive samples for each queried parasite. Data were double entered to assure consistency of reporting, and prevalence was calculated for each study.

To provide a summary of the best-quality information available on endemic soil-transmitted helminths transmission within the United States, a methodological quality assessment tool was developed. Because no gold standard assessment tool exists, one was created using the strengthening the reporting of observational studies in epidemiology (STROBE) checklist as well as existing checklists for the assessment of observational studies and review of the literature.7–9 Five criteria were selected, and each study was awarded zero to five points based on study participant selection, sample size, data sources and measurement technique, parasitological analysis technique, and outcome measures (Table 1). Studies with all five points were designated as high quality.

Initial searches identified 902 articles, and their titles and abstracts were reviewed for relevance. Articles were excluded for irrelevance (765), incomplete primary data (12), missing data (4), commentary style (4), unavailable full text (3), duplicated data (3), and non-United States-based data (1) (Figure 1). Therefore, 110 articles consisting of 132 unique studies met inclusion criteria and were included in this review. Of these studies, 44 focused on soil-transmitted helminth infections likely acquired within the United States, whereas 64 focused on imported infections among immigrants, migrant workers, and refugees (Figure 2). In 24 studies, the population studied was not able to be determined from information provided in the article. A full list of articles included in this review, but not cited is available on request.

Fourteen high-quality studies of soil-transmitted helminths in the United States with likely endemic transmission were identified using a modified STROBE scale (Table 2).10–22 The oldest included study was performed in 1942, and the most recent study was in 1982. All high-quality studies reported prevalence in the southern United States, with six from Kentucky, three from Louisiana, two from Georgia, and one each from Tennessee, North Carolina, and South Carolina. Studies were all cross-sectional, including nine school-based, four community-based, and one survey of attendees at a community health center. Most studies sampled children, with eight using an elementary school population and one being college-based, whereas the remaining five sampled entire communities. The number of subjects in each of the studies varied widely, with the smallest study consisting of 366 subjects and the largest having nearly 4,000 subjects. All but one of these studies used a single screening stool specimen for parasitologic analysis; one study collected three stool specimens from subjects. Laboratory methods used for soil-transmitted helminth identification varied in each of the 14 high-quality studies; concentration was performed in seven studies, direct smear was performed in eight studies, flotation was performed in six studies, and Kato–Katz technique was used in two studies.

Denotes that S. stercoralis testing was not performed as part of this survey.

Prevalence of soil-transmitted helminths varied widely, although the presence of A. lumbricoides and T. trichiura was noted in each of the 14 studies. The reported prevalence of hookworm infection ranged from 0% to 19.6%, T. trichiura ranged from 0.5% to 55.2%, A. lumbricoides ranged from 2.3% to 49.4%, and S. stercoralis ranged from 0% to 3.8%. The highest hookworm prevalence (19.6%) was reported among school children in Tennessee in 1955; however, hookworm was also as high as 13.6% in a 1972 study in Georgia. T. trichiura infection was present in over one-half of school children in Kentucky surveyed by Fulmer and Huemphner13 in 1965, and it continued to be found among rural schoolchildren in Kentucky (12.6%) as recently as 1982. A. lumbricoides prevalence was highest in a study of Cherokee Native American schoolchildren, but it was also found in 14.4% of schoolchildren in Kentucky in the early 1980s. S. stercoralis was described at low rates throughout these studies, with the most recent high-quality study showing 3.0% of schoolchildren infected. Data on frequency of coinfection among study participants were available in five of the high-quality studies, with none of these studies showing clustering of infection among a small group of subjects.13,14,16,20,21

Historically, soil-transmitted helminth infections were endemic throughout Appalachia and the southern United States. The Rockefeller Sanitary Commission invested upwards of $1 million in a campaign designed to eradicate these infections, decreasing hookworm infection from 41.7% among persons in the South in 1914 to 19.3% by 1930.23 Despite these interventions, soil-transmitted helminth infection remained significant in areas of the United States, with some estimating that one in five Kentucky residents or 600,000 persons harbored these parasites in 1945.24 Although transmission of these infections within the United States has likely declined significantly in the intervening years because of improvements in sanitation practices, the current status of these infections is unknown.

Despite the historically high burden of these infections seen in the United States, the published literature does not provide enough information to determine if soil-transmitted infections remain endemic in the United States, with the most recent high-quality study examining endemic transmission of infection occurring in 1982. Recent publications are case-based, study exclusively immigrant populations, or use a laboratory-based approach that makes determination of endemic transmission impossible.

Soil-transmitted helminth infections result in significant disease in those people infected; they are a cause of cognitive and physical growth impairment and anemia in children. Additionally, S. stercoralis infection may result in potentially severe and fatal hyperinfection in immunocompromised hosts.25 All soil-transmitted helminth infections may lead to subtle long-term consequences such as poor school attendance and academic achievement as well as delays in growth and development from chronic malnutrition.1

Although the literature does not provide enough evidence to determine the status of soil-transmitted helminths in the United States, socioeconomic and environmental conditions may remain conducive to ongoing infection. The 1990 poverty rate for Appalachia was 15.2%, higher than the national rate of 13.1%, and in nonmetropolitan areas of central Appalachia, over 27% of the population lives below the poverty level, a rate over two times the national average.26 Substandard housing units are common, facilitating conditions that may encourage transmission of these infections. In Central Appalachia, an area encompassing 179 counties and cities in Kentucky, West Virginia, Tennessee, and Virginia, 57% of counties had substandard housing rates higher than the US rate (5.3%) in 1990.27 Historically, access to indoor plumbing and running water in Appalachia has lagged behind the rest of the United States, with one-half of homes in the region lacking access in 1964. Although sanitation has improved since the last high-quality studies were performed, an estimated 169,000 housing units remained without indoor plumbing as recently as 2000. Poor sanitation continues to persist in some areas of Appalachia, with 3% of the region lacking plumbing, and in some areas, plumbing is not complete in over 25% of housing units.28

This literature review had several limitations. First, search strategies relied on appropriate use of MeSH terminology and may have lead to incomplete identification of existing studies. Additionally, by relying solely on the published literature, this review was subject to publication bias, because studies with minimal or negative results may not have been included. Second, because only a point estimate of prevalence was reported in each study, it was not possible to ascertain the certainty of these estimates of prevalence. Third, most of the studies relied on a single stool screening examination and suboptimal diagnostic methodology. The sensitivity of a single stool examination to detect infection with soil-transmitted helminths may be very low because of variation in egg output and the small amount of stool examined, with reported diagnostic sensitivity of a single stool examination for S. stercoralis ranging from 30% to 50%.29,30 These limitations each contribute to possible underreporting of the current distribution and endemic transmission of soil-transmitted helminths in the United States.