Pre-departure and post-arrival presumptive malaria treatment of 6,159 refugees from Burundi resettling from Tanzania to the United States, May 2007–February 2008. *All refugees received pre-departure presumptive treatment except for pregnant or lactating women. **Three of six artemether-lumefantrine doses administered under supervision. †Six of six artemether-lumefantrine doses administered under supervision along with 250 mL of whole milk. ‡Refugees not receiving presumptive retreatment included 30 who were treated for symptomatic malaria (28 P. falciparum, 2 non-P. falciparum), 37 pregnant or lactating women, and 304 who were P. falciparum-negative in a state that elected to screen everyone and treat only those who were parasitemic. §Including one pregnant woman who did not receive pre-departure artemether-lumefantrine. 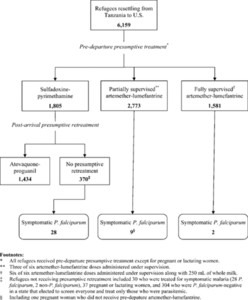 Each year, the United States typically resettles 10,000–30,000 refugees from sub-Saharan Africa,1 where malaria is endemic and most infections are caused by Plasmodium falciparum, the species primarily responsible for severe disease. Such resettlements from malaria-endemic areas may substantially impact the public health and health-care systems in receiving communities.

In 1999, the U.S. Centers for Disease Control and Prevention (CDC) recommended pre-departure presumptive sulfadoxine-pyrimethamine (SP) for P. falciparum malaria for all U.S.-bound refugees from sub-Saharan Africa. This recommendation was implemented by the International Organization for Migration (IOM) who performed the pre-departure medical assessment for U.S.-bound refugees within 72 hours of departure. As regional resistance to SP intensified, CDC issued revised recommendations in 2005 that called for artemisinin-based combination therapy to replace SP treatment. This recommendation was not implemented at that time because of drug cost and availability.

We report on a series of 39 cases of imported P. falciparum malaria among newly arrived refugees from east Africa during a 10-month period in 2007–2008. This series heightened concern about the human and financial impact of malaria on U.S.-bound refugees and their receiving communities and illustrates the consequences of missed opportunities for prevention.

During May 8, 2007–February 29, 2008, 6,159 refugees from east Africa were resettled from Tanzania to 37 U.S. states. During the first two months of resettlement, CDC was notified of 10 cases of symptomatic malaria. In response, CDC made three recommendations. First, active case-finding should be conducted among arriving refugees. CDC encouraged State health and social services departments, voluntary agencies, and refugee sponsors to contact all newly arrived refugees for assessment of symptoms and evaluation as needed; CDC contacted State laboratories to reinforce the standard voluntary reporting of malaria cases. Second, presumptive artemisinin-based combination therapy should be implemented for departing refugees. On July 7, 2007, SP was replaced with artemether-lumefantrine (AL) for all refugees departing from Tanzania. Third, presumptive re-treatment with atovaquone-proguanil should be given after arrival for all asymptomatic refugees who received pre-departure SP, except for pregnant or lactating women, persons with contraindications, and infants weighing < 5 kg.2 (Health agencies in states that received refugees were encouraged to test and treat symptomatic refugees, especially those who did not receive presumptive re-treatment.)

A case was defined as any member of the cohort with symptoms consistent with malaria and microscopic confirmation of P. falciparum parasitemia. Health and social services departments in all 37 states receiving refugees from the camps in Tanzania were notified of every refugee arrival in their state and asked to actively identify cases by direct contact with individual refugees. In addition, the voluntary agencies that assist refugees (e.g., by arranging for medical care) were contacted to assist with identifying symptomatic cases. These efforts were augmented by review of routine surveillance data for malaria reported by laboratories to CDC. For each case, demographic and clinical data were collected by chart review, patient interview, or both, by using a standard form.

Drug samples were selected at random from lots in use when cases occurred. Dissolution testing was performed for two SP batches according to U.S. Pharmacopoeia specifications. Content testing for four artemether batches was performed by using high-performance liquid chromatography.3

The CDC Human Research Protection Office reviewed this evaluation of a public health program and deemed the evaluation exempt from Institutional Review Board review requirements.

Among 1,805 at-risk refugees who received pre-departure SP, 66 (4%) were ineligible for presumptive re-treatment with atovaquone-proguanil (AP), including 28 persons treated for symptomatic P. falciparum malaria, two treated for symptomatic non-P. falciparum malaria, 24 pregnant women, and 13 lactating women. Among the remaining 1,738 eligible candidates, 1,434 (83%) received re-treatment. No subsequent malaria cases were detected. The remaining 304 eligible refugees did not receive presumptive re-treatment because some jurisdictions elected to screen everyone and treat only those who were parasitemic.

Drug quality was acceptable for all samples tested. Both SP samples passed the dissolution test per U.S. Pharmacopoeia criteria, and all four AL samples contained adequate levels of artemether.

In the present public health intervention, refugees received either presumptive treatment with SP, partially supervised AL, or fully supervised AL co-administered with milk. In the SP group, the incidence of malaria was 15.5/1,000 refugees. This value is a minimum estimate because most refugees in this group were re-treated with AP, which presumably prevented additional cases. Disease incidence was significantly lower in both AL groups, and these refugees did not receive re-treatment. The magnitude of the observed differences between the SP and AL groups is probably not primarily accounted for by seasonal changes or camp control measures because the intensity of malaria transmission in refugee camps in Tanzania remained high throughout the period of observation according to a camp surveillance system established by the United Nations High Commissioner for Refugees. Our observations suggest that presumptive P. falciparum malaria treatment administered immediately before departure may be an effective strategy for prevention of disease after arrival.

Because P. falciparum resistance to SP is high in Tanzania,4,5 the apparent failure of this regimen is not unexpected and highlights the impact of failing to provide effective presumptive treatment. Artemether-lumefantrine, the first fixed-dose artemisinin-based combination therapy pre-qualified and recommended by the World Health Organization,6 has high cure rates.7,8 However, the six-dose AL regimen is complicated, requiring doses twice a day for three days, preferably with a fatty snack to promote lumefantrine absorption.9,10 Because of the complexity of delivering a fully supervised regimen in a refugee camp situation, initially, only three doses were supervised. Thus, cases observed in the partially supervised AL group may have been caused by subtherapeutic dosing after poor patient compliance or poor absorption. Furthermore, because neither AL nor SP has an effect on hepatic schizonts, these therapies may not be curative for all patients who were infected near the time of treatment. Although the risk of imported malaria among U.S.-bound refugees can be reduced, complete elimination of imported cases is not achievable with the present strategy, even when effective drugs are administered under ideal circumstances.

Our analysis also confirms that controlling P. falciparum infections and preventing disease among U.S.-bound refugees is an appropriate priority for refugee populations emigrating from areas to which malaria is highly endemic. Plasmodium falciparum malaria causes considerable morbidity among refugees. In this series, 70% of persons required hospitalization ≥ 48 hours, and 10% experienced severe manifestations. In general, post-arrival care may not be optimal because refugees are often unable to access medical care for a myriad of reasons (e.g., language, cultural, logistical, and other barriers to care in an unfamiliar system), which may lead to delays in care,11–14 and U.S. clinicians may have little experience with malaria, which delays diagnosis and impedes appropriate management.15

Imported malaria may create a substantial strain on the receiving communities, health care systems, and public health agencies. For example, in our series, hospitalization costs alone averaged approximately $5,000 per case, and domestic re-treatment costs (drug plus personnel time) for refugees who received SP and were re-treated with AP exceeded $220,000 (Bagga S and others, unpublished data). Others have shown that effective pre-departure presumptive antimalarial therapy produces a cost-savings when the prevalence of clinical malaria infection in the resettlement group exceeds 1%.16 Furthermore, imported infections present the potential for autochthonous transmission.17,18 Competent anopheline mosquito vectors are found throughout the lower 48 states,19 and in the past decade, local transmission has been documented in five states.20 However, no instances of local transmission in the United States have been linked to refugee resettlement. Finally, 8–60% of refugees from areas to which malaria is highly endemic have detectable P. falciparum parasitemias more than four weeks after resettlement in North America.21–23 Because no widely available testing modality is sensitive enough to reliably detect persons with subclinical infection at the time of arrival medical screening,22,23 alternatives to mass presumptive treatment of the control of subclinical infections are few.

This evaluation has several limitations. First, because our investigation was not a randomized controlled trial, causation cannot be demonstrated. Therefore, only temporal associations between the presumptive treatment regimen and incidence of imported malaria are reported. Second, case-finding may have missed refugees who did not seek care for malaria symptoms, particularly those in the SP group who arrived before active case-finding was initiated. In addition, most refugees who had received SP before departure were presumptively re-treated with AP after arrival. Both of these factors would have contributed to under-reporting the true incidence of malaria in the SP group, which would have under-estimated the impact of pre-departure therapy. Missed cases in this group would have increased the differences observed. Third, although camp surveillance systems in Tanzania indicate that the intensity of malaria transmission remained high throughout the observation period, there was no other data available to verify that on-going malaria in the area during the study period remained stable through the study period. Lastly, our findings were in refugees from camps located in a specific geographic location and may not be generalizable to other groups of immigrants or refugees.

In summary, the risk of imported P. falciparum malaria among refugees resettling to the United States from malaria-endemic regions is substantial. Although pre-departure presumptive treatment with AL will not prevent all cases, it may be an effective prevention strategy to decrease morbidity, protect public health, and lower associated costs and burden on host communities. Clinicians should remain suspicious for malaria in symptomatic refugees from malaria-endemic regions, especially in children and regardless of treatment history.