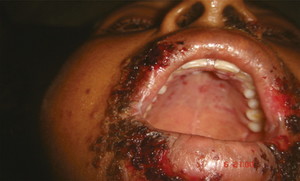 Snake bite is an important health hazard in tropical countries and is associated with significant morbidity and mortality. Herpes labialis is a common ailment caused by the Herpes simplex virus. There is no published data showing any association between the snake bite and development of Herpes labialis. Here, we present a series of patients who developed Herpes labialis after Russell's viper bite and had acute kidney injury. We attempted to find whether snake bite is an immunosuppressed state and whether it could have pre-disposed the patients to the development of these lesions.

Snake bite continues to be a significant public health issue in developing tropical countries and is associated with significant morbidity. Data that directly estimate the incidence of snake bite in India are unavailable because a large portion does not get reported. By using the available published data with extrapolations, the World Health Organization (WHO) estimates that India has the highest number of deaths because of snake bites in the world, with 80,000 envenomation per year and a case fatality rate ranging from 1.7% to 20%.1,2

Herpes labialis is a common ailment caused by Herpes simplex virus infection. Numerous triggering factors are identified, which include trauma, sunburn, fever, emotional stress, and systemic infection. We could not find any published report of association between snake bite and Herpes labialis. Here, we present a series of 10 patients who developed acute kidney injury and had Herpes labialis after Russell's viper envenomation.

Between October 2008 and December 2010, there were 421 patients of vasculotoxic snake bite with acute kidney injury admitted in the Department of Nephrology Institute of Post Graduate and Medical and Educational Research (IPGMER), Kolkata. Snakes were identified as Russell's viper in 70% of cases. Combined neurological and vasculotoxic features were present in two patients. Most of these patients received the initial dose of polyvalent antisnake venom from their primary health center, and use of additional dosage was decided after monitoring of the coagulation status. Coagulation status was monitored using the whole-blood clotting test 6 hourly. The time period to the normalization of the coagulation status was calculated from the time of bite. After the coagulopathy was restored, no additional antisnake venom was given. The antisnake venom was given by infusion within 1 hour. Each vial of serum contains 10 mL, and each 1 mL neutralizes 0.6 mg cobra, 0.6 mg Russell's viper, 0.45 mg common krait, and 0.45 mg sawscaled Viper venoms.

Diagnosis of acute kidney injury was made as per RIFLE criteria; 10 cases of Herpes labialis were noted during this period. These patients were admitted at different time frames, and clustering of cases was not apparent at any particular point of time.

For comparative reason, we reviewed patients with acute kidney injury (not because of snake bite) admitted during this time period retrospectively and observed them for the development of Herpes labialis. Patients who had received immunosuppressive medications within 4 weeks of development of renal failure or were on immunosuppressive medications and those with diagnosis of malignancies were excluded. There were 874 cases of acute kidney injury (snake bite excluded), of which Herpes labialis was noted in only one patient.

For those patients who developed Herpes labialis, total cluster of differentiation (CD) count and CD4/CD8 assay were sent at the end of the first week (day 7); this was repeated at the end of the second week (day 14). The lymphocyte count was sent pre-dialysis, with an attempt to be at least 24 hours after the preceding dialysis session.

The clinical profile of those patients who had Herpes labialis, their cutaneous involvement, their renal outcome, and CD counts are shown in Tables 1–4, respectively.

Local reaction grade: grade 1 = no pain and no swelling; grade 2 = local swelling confined to two segments of the bitten limb (moderate pain); grade 3 = extension of swelling beyond two segments and pain resistant to analgesics; grade 4 = swelling spreading to the trunk.

Table shows the extent and duration of herpetic lesion

Table showing the severity of renal involvement and the outcome

CD counts of the affected patients at first and second week

Herpes labialis is considered a common ailment caused by Herpes simplex virus 1, which belongs to the family Herpesviridae and subfamily alphavirinae. It is a double-stranded virus with certain unique biological properties in terms of neurovirulence, latency, and reactivation. Numerous factors like emotional stress, trauma, systemic infection, and fever are known to trigger reactivation of Herpes labialis. Literature search did not find any published data showing association between snake bite and Herpes labialis. The exact pathogenetic mechanism behind development of Herpes labialis is not clearly known, but it has been shown that CD8 cells have an inhibitory effect on Herpes virus replication and prevent viral reactivation.3

We present here, for the first time, a case series of 10 patients who developed Herpes labialis after Russell's viper bite. The snake was identified (when brought) by the primary treating physician in four of the cases. In the remaining six patients, identification was done by the local expert and the victims' descriptions. Nine of these patients developed rise in creatinine, whereas one of the patient (patient 10) had a diagnosis of acute kidney injury made based on urine output in accord with RIFLE criteria.4 Of these 10 patients, Tzanck smears were made for three patients, and in the remaining seven cases, diagnosis was made on clinical grounds. Giant multinucleated cells could be identified in all of the cases where Tzanck smear was performed. In majority of the cases (5 of 10), the lesion was confined to the lips only. There was involvement of oral mucous membrane in three cases and involvement of the chin in two cases. One of the patients (patient 7) had extensive lesions involving the lips, oral mucous membrane, hard palate, nose, and face (as shown in Figure 1). Herpes labialis developed 4–8 days after the snake bite. Prior history of similar lesion could not be elicited in any of these patients. None of these patients had fever at the time of development of these lesions. Even in the absence of prior history of Herpes gingivo stomatitis, a clinical diagnosis of Herpes labialis was entertained rather than a primary Herpes infection, because primary infection usually presents with pharyngeal and tonsillar involvement. Many of the primary infections may also be asymptomatic and may have occurred in childhood which may not be remembered by the patient. Four of the patients were treated with oral acyclovir with dosage modification as per renal function, another five improved with topical acyclovir, and one patient did not require any treatment. The lesions had resolved by the tenth day in all of the patients, and there was no difference in the duration of skin lesion between those who received oral acyclovir compared with those who received topical therapy.

The duration of coagulopathy of these patients would seem longer than expected. However, these are patients with severe systemic envenomation and significant bleeding manifestation, suggesting that the amount of venom would be higher. Many of these patients reside in remote areas and received their first dosage of antisnake venom from peripheral health centers; after which they were referred to us. There were transportation delays, and the rate of infusion of the antivenom given in these peripheral centers were also inadequately slow. All these factors could have contributed to inadequate antivenom dosage, at least in the initial period, thereby leading to a longer duration of coagulopathy. It has been mentioned that the maximum amount of venom that can be injected from Russell's viper is 147 mg, and the maximum dose requirement to neutralize the venom would be 25 vials.5 We did notice that, in our patients, the dose of antisnake venom required to restore the coagulopathy was higher than recommended. Similar dose requirements were also shown in a previous study from northern India.6

If the association with Herpes labialis and Russell's viper envenomation is indeed causal, then the possibility of a defective cell mediated immune system after snake bite would have to be considered. In this context, it is possible that there could be a quantitative defect and/or qualitative defect of the CD8 cells or an abnormality of the antigen-presenting cells (dendritic cells), leading to poor T-cell activation. CD4 and CD8 counts were low in four of these patients when evaluated at the end of the first week. None of these patients had received steroids during the hospital stay. All four patients had their lymphocyte counts normalized at the end of the second week. Two potential confounding factors can be noted in these patients; first, the state of uremia could have contributed to lymphopenia in these patients, and second, hemodialysis itself could also have played a contributory role in causing lymphopenia. Varying degrees of lymphopenia as well as lymphocyte functional abnormalities have been noted in end-stage renal disease patients and patients on maintenance hemodialysis.7,8 This includes decreased proliferative response to concanavalin A, phytohemagglutin, cell surface antigens, and decreased production of interleukins along with increased apoptosis of Th subsets. Chronic hemodialysis patients and patients with advanced chronic kidney disease not on dialysis are noted to have their T lymphocytes in an aberrant state of activation, as shown by more CD3 + CD69 + T cell, which drives them into early apoptosis, thereby causing lymphopenia.9 Recently, it has been shown in in vitro studies that the uremic sera of an end-stage renal disease patient interferes with dendritic cell function.10 Dendritic cells are known to bind to glycoproteins gB and gC present on Herpes simplex virus through DC SIGN, a C-type lectin expressed by dendritic cells.11 However, whether such an immunosuppressive effect occurs in patients with acute kidney injury is largely unknown.

Although this was just an observational study and our attempt was to highlight the fact that snake envenomation could be an immunosuppressed state, we realize that there were potential areas of uncertainty because of the lack of pre-existing evidence. In our study, we had the lymphocyte count assay done in only those patients with Russell's viper bites who developed acute kidney injury and had Herpes labialis, and the number of patients was small. There are no published literature which has specifically addressed the lymphocyte counts following Russell's viper bite. We did not assess the functional aspect of the lymphocyte subset, and it is plausible that those patients with a normal lymphocyte count could have had a transient functional defect of the suppressor lymphocyte, allowing the virus to reactivate. The possibility of functional defects of dendritic cells was also not assessed. The evidence of the immunological dysfunction in uremic patient has been confined mainly to end-stage renal disease patients and is scarce for acute kidney injury patients. These could all be potential areas for the basis of future research.

Interestingly, the renal outcome was also not good in these patients. One of the patients developed end-stage renal disease and became dialysis-dependent, whereas in another five patients (excluding the one lost to follow-up), the renal recovery was incomplete. Whether the state of immunosuppression has any bearing on the recovery of renal function is not known

Herpes labialis can be found in association with Russell's viper bite with acute kidney injury. This association, in turn, points to a possible immunologically altered state in these patients. Identification of venom component(s) that might be responsible for this altered immune state could help in opening up a whole new approach of therapy of such patients in the future.