Seroprevalence of antibody against Rift Valley fever virus, by age category, among African buffalo in Kruger National Park during initial years 1–5 of the study (2001–2005). Bars indicate age-specific seroprevalence (in each year) for animal subgroups (defined as youngest group = 1–3 years of age; middle-low group = 3–5 years of age; middle-high group = 5–8 years of age; oldest group = more than 8 years of age) during that particular study year. Numbers above each bar indicate the number of animals that were tested in that age group in that study year.

Capture locations (gray stars) of nine African buffalo found to have seroconverted for antibodies against Rift Valley fever virus (upon recapture and repeat serologic testing). Numbers next to starred locations indicate the order of detection of these seroconverting animals. Open circles indicate the distribution of all other capture events during November 2000–July 2006. Borders of Kruger National Park are indicated by the solid line.

Time series of seroconversion events, relative to rainfall, in Kruger National Park. Circles indicate monthly rainfall for the study area during 2000–2006. Horizontal gray bars indicate the intervals (period between observations) for the nine seroconversion events to antibody against Rift Valley fever virus among 126 initially seronegative buffalo that were repeatedly sampled during the study. To indicate their location, numbers in parentheses correspond to sites indicated in Figure 4 and reflect the order of detection of seroconverted animals during the period of the study.

Kaplan-Meier survival plots of African buffalo in the Kruger Park study according to their serostatus for antibody against Rift Valley fever virus (RVFV). Lines indicate the cumulative age- and sex-adjusted percent survival (in years) of 51 animals seropositive for antibodies against RVFV (gray line) or 116 animals seronegative for antibodies against RVFV (dark line) that were serially monitored for survival during the period of the study. 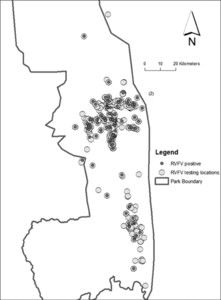 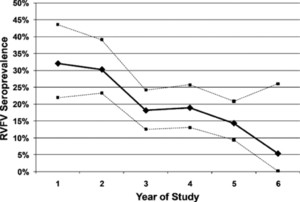 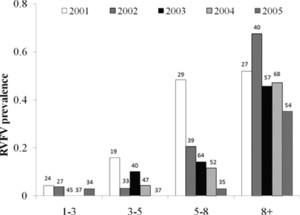 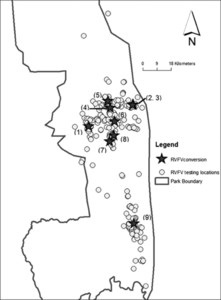 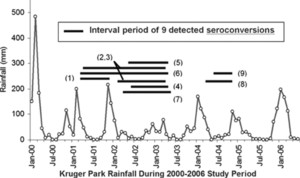 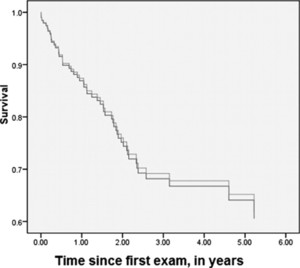 Rift Valley fever virus (RVFV) is an emerging biodefense pathogen that poses significant threats to human and livestock health. To date, the interepidemic reservoirs of RVFV are not well defined. In a longitudinal survey of infectious diseases among African buffalo during 2000–2006, 550 buffalo were tested for antibodies against RVFV in 820 capture events in 302 georeferenced locations in Kruger National Park, South Africa. Overall, 115 buffalo (21%) were seropositive. Seroprevalence of RVFV was highest (32%) in the first study year, and decreased progressively in subsequent years, but had no detectable impact on survival. Nine (7%) of 126 resampled, initially seronegative animals seroconverted during periods outside any reported regional RVFV outbreaks. Seroconversions for RVFV were detected in significant temporal clusters during 2001–2003 and in 2004. These findings highlight the potential importance of wildlife as reservoirs for RVFV and interepidemic RVFV transmission in perpetuating regional RVFV transmission risk.