Sheldon National Wildlife Refuge, Nevada, United States. Locations where feral horses were trapped (gather sites) during five years (2004–2006, 2008, and 2009) and numbers of horses per group (band sizes) that were counted during aerial surveys in 2008 and 2009. 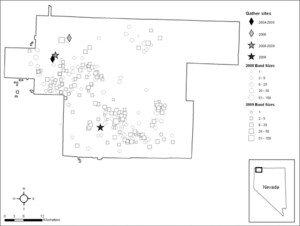 We screened 1,397 feral horses (Equus caballus) on Sheldon National Wildlife Refuge, Nevada, United States, for IgM and IgG against flavivirus during 2004–2006, 2008, and 2009. Positive serum samples were tested for neutralizing antibodies to West Nile virus (WNV) and St. Louis encephalitis virus (SLEV). One animal was positive for antibody against WNV in 2004, but all others tested in 2004–2006 were negative. In 2008 and 2009, we found evidence of increasing seropositive horses with age, whereas seroprevalence of WNV decreased from 19% in 2008 to 7.2% in 2009. No horses were positive for antibody against SLEV. Being unvaccinated, feral horses can be useful for WNV surveillance.