Date of fever onset for suspected and laboratory-confirmed cases of leptospirosis in Tchimbe-Raid athletes. 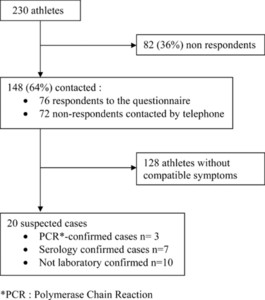 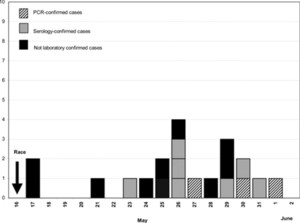 Three athletes who participated in a race in the tropical forest of the Caribbean island of Martinique were subsequently diagnosed with leptospirosis using polymerase chain reaction (PCR). We investigated an outbreak to evaluate possible risk factors, and to determine the appropriate public health recommendations. Of 230 athletes, we contacted 148 (64%) and 20 (13.5%) met our case definition. Five were hospitalized and none were fatal. Ten (91%) of the 11 ill athletes who were tested were confirmed by PCR or serology. Serogroup Pyrogenes was commonly found. Cutaneous cuts, reported by 14 (73.7%), was the only potential risk factor using univariate analysis. Sporting event participants in tropical areas should be made aware of specific warnings and recommendations concerning the risk of leptospirosis, especially after periods of heavy rainfall or flooding. Rapid diagnostic assays such as PCR are particularly appropriate in this setting for early diagnosis and for formulating public health recommendations.