Flow chart showing the origin of patients selected for this study.

Results of a single hemoculture in 152 T. cruzi-infected women according to the time when the first tubes were positive (51 non-pregnant and 101 pregnant women in Goiania, Brazil, from 2006 to 2007). 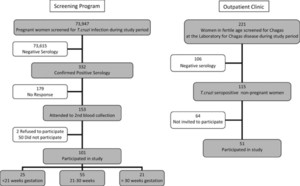 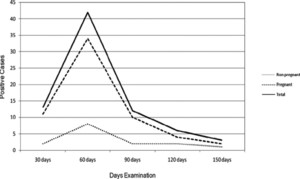 One hundred fifty-two Trypanosoma cruzi seropositive women were submitted to a single hemoculture; 101 were pregnant, and 51 were not pregnant. Seven tubes from each individual were harvested with liver infusion tryptose (LIT) medium and observed monthly until the fifth month. Hemocultures were positive in 50% (76 of 152) of the women. Results showed that the positivity was 29.4% (15 of 51) among non-pregnant women and 60.4% (61 of 101) in pregnant women (P < 0.05). In relation to gestational age, there were significant differences in positivity, with a higher proportion of women with positive hemocultures (20 of 25) before 21 weeks and lower after 30 weeks (10 of 21; P = 0.02). We conclude that pregnancy enhances the parasitemia in Chagas disease, with a higher effect early in pregnancy.