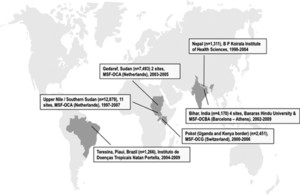 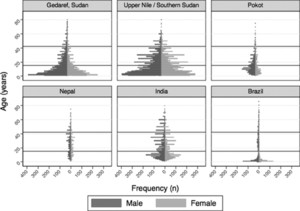 Who Is a Typical Patient with Visceral Leishmaniasis? Characterizing the Demographic and Nutritional Profile of Patients in Brazil, East Africa, and South Asia

Drug-dosing recommendations for visceral leishmaniasis (VL) treatment are based on the patients' weight or age. A current lack of demographic and anthropometric data on patients hinders (1) the ability of health providers to properly prepare for patient management, (2) an informed drug procurement for disease control, and (3) the design of clinical trials and development of new drug therapies in the different endemic areas. We present information about the age, gender, weight, and height of 29,570 consecutive VL patients presenting to 20 locations in six geographic endemic regions of Brazil, East Africa, Nepal, and India between 1997 and 2009. Our compilation shows substantial heterogeneity in the types of patients seeking care for VL at the clinics within the different locations. This suggests that drug development, procurement, and perhaps even treatment protocols, such as the use of the potentially teratogenic drug miltefosine, may require distinct strategies in these geographic settings.