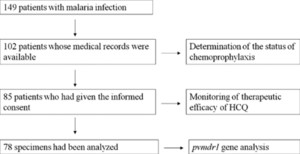 Chemoprophylaxis with hydroxychloroquine (HCQ) and primaquine has been used in the Republic of Korea (ROK) Army since 1997. It may facilitate the development of chloroquine (CQ)-resistant strains of Plasmodium vivax. We investigated the therapeutic efficacy of HCQ and the pvmdr1 gene polymorphisms in P. vivax. From June to September 2006, 102 soldiers with vivax malaria near the demilitarized zone in Gyeonggi-do, ROK, were enrolled in the study. We determined the status of compliance of chemoprophylaxis. In 85 patients, therapeutic efficacy was monitored 28 days after standard HCQ treatment; 66 (64.7%) of 102 malaria patients had taken all chemoprolaxis with HCQ. In all patients enrolled in the therapeutic efficacy monitoring, parasitemia had not been observed since 3 days after standard HCQ treatment. However, the ubiquitous presence of the F1076L mutation of the pvmdr1 was observed. There was no evidence that the F1076L mutation of pvmdr1 could contribute to failure of HCQ treatment.