Relationship between gravidity and maternal peripheral, placental, and congenital malaria. 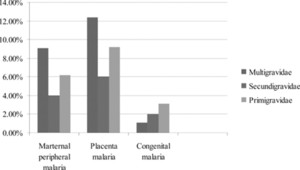 Congenital malaria has been defined as malaria infection acquired by transmission of malaria parasites from mother to child during pregnancy or perinatally during labor, the symptoms attributable only to malaria with evidence of ring forms of malaria parasites in the erythrocytes of an infant within the first 7 days of life, irrespective of clinical symptoms.1,2 It was considered uncommon before now and thought to be restricted to malaria-endemic areas.3,4 Globally, between 75,000 and 200,000 infant deaths are attributed to malaria infection in pregnancy every year.5,6 Prevalence rates between 0.3% and 46.7% have been obtained from both endemic and non-endemic areas.4,7,8 The high prevalence has been attributed to increased resistance to antimalarial drugs and parasite virulence resulting from altered antigenic determinants.9 Prevalence is higher among infants of non-immune mothers than among those with partial immunity.10 This is thought to be caused by the protective effect of maternally transferred antibodies on parasite multiplication in the infants of immune mothers.4,11,12 In most cases of congenital malaria, the baby is likely to have been infected while in utero.13 Factors that determine the progression from the presence of parasites to clinical disease in the newborn are not clearly understood. It has been observed in some newborns with parasitemia at birth that, without antimalarial medication, the parasites clear spontaneously and the baby does not develop clinical malaria.14 This has been partly attributed to the protective effect of maternal antibodies transferred to the newborn, which confers transient protection to infants.4 Also, the high level of fetal hemoglobin in newborns is thought to slow the rate of parasite development.15 Malaria studies in Calabar have been largely based on blood-slide microscopy. The reported high prevalence of congenital malaria requires accurate confirmation of diagnosis. The polymerase chain reaction (PCR) method has been shown to be significantly more sensitive in detecting low-level parasitemia than the standard diagnostic method of thick blood-film microscopy.16 The aim of this study was to determine the prevalence of congenital malaria using nested PCR methods in Calabar, Nigeria.

This was a prospective study of the prevalence of congenital malaria in Calabar using nested PCR methods. Pregnant women and their newborns were consecutively enrolled in the study between March and June 2009.

The study was conducted at the delivery wards of the University Teaching Hospital and General Hospital, both within the city of Calabar in southeastern Nigeria. Malaria transmission in the study area is stable and uniformly intense throughout the year, which it is the case in most parts of Nigeria.17 The study participants were mother–neonate pairs.

Ethical approval was obtained from the ethical review committees of the University of Calabar Teaching Hospital and the Cross River State government. Pregnant women also gave informed consent to participate before enrollment in the study.

Calculation of the minimum sample size was based on the prevalence of congenital malaria of 5.1% reported in a multicenter study conducted recently in Nigeria.17 Two hundred four mother–neonates pairs were enrolled, making allowances for at least a 10% attrition rate from incomplete documentation and a 5% margin of sample error.

A pre-tested questionnaire was used to obtained information on demographic data, gravidity, and gestational age of the mother. The weight and gender of neonates were recorded. Aseptic procedures were observed in sample collection. Cord-blood and placental samples were collected immediately after delivery. Cord blood was collected as soon as newborns were separated from their mothers; the umbilical cord attached to the baby was clamped and released slightly to drop some blood into ethylene diamine tetra acetic acid (EDTA) bottles labeled C. Placental samples were then collected with sterile needle and syringe from the maternal placental surface into EDTA sample bottles labeled P; then, blood was transferred to the filter papers, and dry blot spots for PCR were prepared. Samples were not collected for histology or placental impression smears. Capillary blood sample were collected from mothers (finger prick) and babies (heel prick) within 24 hours of delivery. Three drops of peripheral blood were used to make thick smear for Giemsa stain. The filter papers were allowed to dry, and then, each sample was sealed separately in envelopes containing desiccants and preserved at 4°C in the refrigerator. Nested PCR was carried out at the United Kingdom Medical Research Council Laboratories, The Gambia.

DNA was extracted from the dried blood spots on filter paper using QIAxtractor Tissue protocol (Qiagen, Hilden, Germany). PCR amplification of Plasmodium small subunit ribosomal RNA (SSUrRNA) was done in a nested PCR format as described by Snounou and others18 and a modified version as described by Rougemont and others.19 The PCR products were confirmed by agarose gel (2%) electrophoresis

Definition of congenital malaria for this study.

Malaria infection acquired by transmission of malaria parasites from mother to child during pregnancy or perinatally during labor was determined with evidence of ring forms of malaria parasites in the cord-blood smear at delivery or in peripheral blood smear of an infant within the first 7 days of life, irrespective of clinical symptoms.

The Epi-Info version 6 was used for data entry, validation, and analysis (Centers for Diseases Control and Prevention, Atlanta, GA). The χ2 and Fisher exact tests were used to test for association between variables. The level of significance was considered at values less than 0.05.

One hundred forty-six (71.6%) mothers had at least one episode of clinical malaria during pregnancy; 47 (23.0%), 40 (19.6%), and 30 (14.7%) had malaria attacks in the third, second, and first trimesters, respectively. Seven (3.4%) suffered from malaria in more than one trimester. Fifty (24.5%) participants took intermittent preventive treatment with sulphadoxine-pyrimethamine (IPT-SP) as prophylaxis against malaria, 9 (4.4%) used insecticide treated bed nets (ITN), and 14 (6.9%) combined both IPT-SP and ITN use. One hundred thirty-one (64.2%) did not take any prophylactic measures against malaria during the pregnancy.

Peripheral blood samples collected from 203 mothers and their babies as well as 204 samples from cord blood and placenta aspirates were examined by nested PCR for malaria parasites.

Malaria parasitemia in the babies and cord blood.

Relationship between gravidity and prevalence of congenital malaria

Association of congenital malaria with maternal malaria and placental parasitemia

Fourteen (6.9%) peripheral blood samples from mothers were positive by nested PCR. Nine (10.8%) of the positive cases had fever during pregnancy compared with 5 (4.3%) who did not have fever (Fisher exact P value = 0.066). OR of association between maternal peripheral malaria and congenital malaria is 15.6 (2.0–120.5). Also, maternal peripheral malaria parasitemia was significantly associated with transmission of malaria from mothers to babies (Fisher exact P value = 0.039). Cord blood was positive for malaria parasites in 2 (14.3%) of 14 mothers with positive parasites in peripheral blood, although only 3 (1.6%) babies of the 189 mothers who did not have peripheral parasitemia had cord-blood parasitemia (Table 4). Multigravidae mothers were more susceptible to placental parasitaemia than primidgravidae mothers (χ2 P < 0.0001). We also observed a higher prevalence of maternal peripheral parasitemia among multigravidae, followed by primidgravidae and lastly, secundigravidae (Figure 1).

The prevalence of malaria parasitemia by nested PCR was 2.0% for cord blood, 9.8% for placenta malaria, 6.9% for maternal peripheral blood, and 0.0% for baby peripheral blood. Microscopic evaluation of thick blood films by reading 100 oil-immersion fields of Giemsa-stained smears gave discordant results, detecting only about one-half the number of positive cases identified by nested PCR (data not shown).

This study showed low prevalence of congenital malaria (2.0%) compared with previous studies in Calabar that reported prevalence rates of 3% and 7.6%.7,20 Other Nigerian studies have also reported higher prevalence rates ranging from 5.1% to 46.7%.8,9,17 The high prevalence recorded in previous studies could be attributed to factors such as methodology and expertise of the microscopist, because all the studies were based on the microscopy method. Durrheim and others21 attributed the accurate diagnosis of malaria to good techniques, quality reagents, functional microscopes, and well-trained microscopists. A careful appraisal of the studies that reported the highest rates revealed significant gaps either in the reporting or actual conduct of the laboratory procedures. In this study, all of the 814 samples were examined by PCR method to detect low-level parasitemia. The key difference between the previous studies cited here and the present one is that the results of other studies were not confirmed by PCR. PCR is a more sensitive and specific method of diagnosis than microscopy.22,23

The low prevalence of congenital malaria observed in this study could also be because of the design (cross-sectional); hence, single sets of blood samples were only collected within the first 24 hours of birth. Other studies that followed-up babies for longer periods of time after birth reported higher prevalence of congenital malaria. Egwunyenga and others24 reported prevalence of 2.82% within 7 days of birth in a study in northern Nigeria. However, a multicenter study in Nigeria,17 in which blood was collected within 4 hours of delivery, reported lower prevalence of 1.1% by centers in the southwestern part of the country (although the overall country prevalence was 5.1%). It, therefore, seems that, when blood sampling was within a few hours, the prevalence was lower than when it was taken on the seventh day.

The other possible explanation for the low prevalence of congenital malaria in this study was the use prophylactic measures by study participants. About one-third of the participants took measures to prevent malaria (IPT-SP, treated bed nets, or both). Both measures have been shown to reduce the prevalence of congenital malaria and improve pregnancy outcomes.25,26 In addition, some of the mothers had malaria during the period of pregnancy, and the drugs administered to treat the malaria might have contributed to the low parasitemia observed in the present study.

However, multigravid mothers had higher levels of peripheral parasitemia and were more susceptible to placental parasitemia than the primigravid mothers. This varies from what was reported from other studies.27 We could not find an explanation for this observation. The relatively small sample size of this study means that the study was probably not powered enough to reach strong conclusions on the observations of this study.

In conclusion, this PCR-based study observed lower prevalence of congenital malaria than has been reported by previous studies conducted particularly in Calabar. We also report a higher percentage of multigravidae with placental malaria. We recommend that a large, multicenter, adequately powered study be conducted to determine the prevalence of congenital malaria in Nigeria using both PCR and microscopy methods.