Phylogenetic tree constructed by the neighbor-joining method and based on the internal transcribed spacer 2 region sequencing of adult Trichostrongylus spp. worms recovered from humans and from a goat (bold letters). Sequence was deposited in GenBank. Values at nodes represent a bootstrap confidence level > 50% based on 1,000 re-samplings. The sexes of the worms are indicated in brackets. 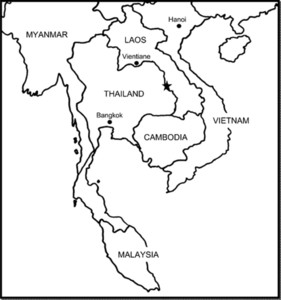 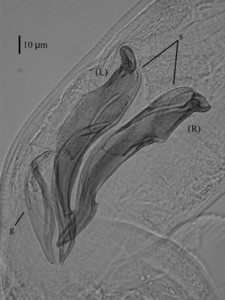 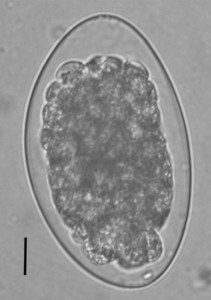 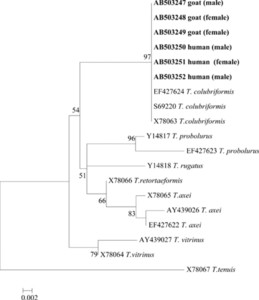 Human Trichostrongylus colubriformis Infection in a Rural Village in Laos

In Lahanam Village, Savannakhet Province, Laos, 125 of 253 villagers (49.4%) were found by fecal examination to harbor hookworm eggs. The eggs were heterogeneous in morphology and size, suggesting infections of mixed nematode species. To confirm the hookworm egg species, on a voluntary basis, 46 hookworm egg–positive participants were treated with albendazole, and post-treatment adult worms were collected from purged fecal samples. The common human hookworm was found in only 3 participants; 1 case of Necator americanus, and 2 cases of Ancylostoma duodenale. In contrast, adult Trichostrongylus worms were expelled from most participants (43 of 46, 93.5%). The Trichostrongylus species were confirmed by morphology and internal transcribed spacer 2 sequences; all worms were of the same species (T. colubriformis). In addition, some Trichostrongylus worms were obtained from a goat in the same village and identified as T. colubriformis. The results suggested that T. colubriformis was the main zoonotic species causing hookworm infections in the village.