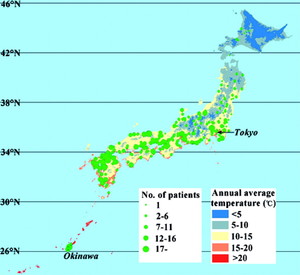 Few reliable data are available on the incidence of snake bites in developing and developed nations. Insufficient epidemiologic data have hindered the recognition of snake bite as an important public health issue. We verified statistics of snake bites (mamushi and habu bites) in Japan by using a currently available, nationally representative, hospital-based database. We identified 1,670 inpatients with snake bites from 404 hospitals during July 1–December 31 in 2007 and 2008. More than 60% were males, the average age was 60.1 years, and the in-hospital mortality rate was 0.2%. The incidence of mamushi bite, distributed between latitudes 30°N and 46°N, was estimated to be 1.67 bites/100,000/6 months. It is important to continue collecting all available data to monitor the trends of this life-threatening disease.

Snake bites remain a devastating, life-threatening, environmental hazard not only in tropical developing nations1,2 but also in developed nations.3 Venomous snakes are widely distributed in almost all countries between latitudes 50°N and 50°S.4 Japan has an area of approximately 378,000 km2 and a population of approximately 127 million. Human-inhabited areas are located between 24°N and 46°N, which ranges from a subtropical zone to a temperate zone. Mamushi (Gloydius blomhoffii)5,6 and habu (Protobothrops flavoviridis)7–9 are two of the major venomous snakes in Japan; both belong to the sub-family Crotalinae (pit vipers). Mamushi bites occur in areas between 30°N and 46°N. Habu bites occur on Okinawa Island and the surrounding isolated islands (24–29°N), a region inhabited by 1.5 million persons.

Presumably, snakes worldwide envenom hundreds of thousands of persons and kill or injure tens of thousands every year.1 However, few reliable data on the accurate incidence and associated mortality are available, and the public health burden attributable to snake bites remains unclear. Surveillance systems on snake bites are not well established even in developed nations. For instance, the American Association of Poison Control Centers reports annual statistics of snake bites in the United States,10 but many snake bites go unreported because reporting is not mandatory and some treating physicians do not consult with a poison-control center.3 The situation is worse in Japan; no national surveillance system is present, and the incidence of snake bites remains obscure.

We verified the incidence and geographic distribution of snake bites in Japan by using a currently available, nationally representative, hospital-based clinical database; the Japanese Diagnosis Procedure Combination (DPC) inpatient database. The DPC database is a discharge abstract and administrative claims data. The DPC hospitals cover approximately 38% of all the acute care beds in Japan. Data are compiled during July 1–December 31 every year by the DPC Research Group, which is funded by the Ministry of Health, Labor and Welfare, Japan.11 The database includes location of hospitals; patients' age and sex; diagnoses recorded with the International Classification of Diseases, 10th Revision codes; procedures; drugs and devices used; and lengths of stay and inhospital mortality rates.

Addresses of 404 hospitals were geocoded, and locations were displayed on a map of Japan and were coupled with information on average annual temperature and population census data by using ArcGIS version 9.3.1 (Environmental Systems Research Institute Inc., Redlands, CA) (Figure 1). With regard to mamushi bites, we have described the number of bites, the coverage rate of acute care beds and the population, and estimated the incidence of mamushi bites in each region, corresponding to latitudes of 30–34, 34–38, 38–42, and 42–46°N (Table 1). Overall, the incidence of mamushi bites was estimated to be 1.67 bites/100,000 persons/6 months during July–December. Mamushi bites were more distributed in southern part of Japan, and temperature was presumed to have an important influence on the distribution.

Most previous reports on the incidence of snake bites were incomplete or flawed, or the methods of data acquisition were not disclosed, and data extrapolations were unjustified.1,12–14 The present study used a nationwide hospital-based database; a similar approach could not be useful in developing nations because of poor accessibility of healthcare services, but can be applicable in any developed nations where similar databases are established. However, our results are incomplete because of several limitations that underlie in the DPC database. First, the DPC survey is conducted only during July–December each year. Second, the database includes only inpatient data, and some victims with mild symptoms may be treated in outpatient clinics or might not seek treatment. Third, limited data from the isolated islands off southern Japan prevented us from accurately estimating the incidence of habu bites.

Insufficient epidemiologic data have hindered the recognition of snake bite as an important public health issue, and its threat has been largely ignored in developing and developed nations.1,2 The only reliable way to assess the true incidence of snake bites in a country is with a well-designed, population-based, mandatory reporting system. However, given that such a system has not yet been established, epidemiologists should use any currently available database to evaluate the national burden of the disease. It is important to continue collecting all available data to monitor the trends of this distressing condition.